Skip to content
Last night I was running with a gentleman who has truly impressed me!  Eric is in Central Park running  – now granted, a large number of people run in Central Park daily.  Eric, however, has been running since Friday morning (and it’s currently Saturday evening).  He’s over 130 miles run thus far, and all to raise money for The MMRF to help find a cure for Multiple Myeloma!  I haven’t even seen how much he’s raised but last night he was just shy of $70,000.00.

Katie Couric came by, Amy Freeze (ABC7 NYC) ran two loops (12miles) with him doing an interview ‘on the run’.  I ran with Eric last night, starting around 10pm.  He had been running 16 hours around the time we finished.  I ran for about an hour.  At 1am he had to exit the park (it was closed) and he had to run AROUND the park – CPS to Fifth to 110th to Columbus to CPS – that’s longer than the 6.1 mile loops.

Bottom line, this guy is impressive – and he’s doing it all to fight MM.  If you can make a donation it helps to motivate and move him along.  He’s got one more night to get through and will finish at 8am tomorrow (Sunday morning).  I’m going out to watch him finish – let’s make sure he finishes by meeting his goal!

Please feel free to pass this along, share it on Facebook/Twitter/Tumbler or whatever other social media is your social media of choice! 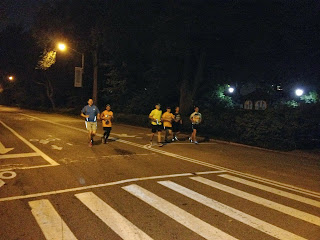 Eric’s page on The MMRF:
http://TheMMRF.org/48hours

Eric’s page on Facebook:
Just A Mile To Go