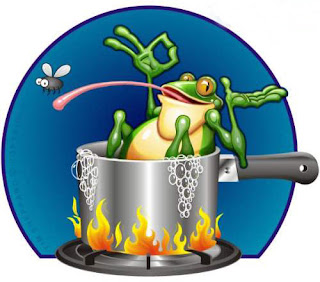 The story, which I trust is an urban legend, purports to be of a serious experiment performed at some hopefully non-existent Ohio college. The researchers claimed that if they dropped a frog into boiling water, the frog, as you might expect, instantly jumps out. However, if the frog is gently placed in room-temperature water, and heat is oh-so gradually applied, the frog never even attempts to escape. The horrifying result is something that I’m sure has been given an attractive name by French chefs. Like pâté de foe gras. Or, more probably, given all the hits to my brain over the last two years, my information is wrong. Perhaps the study didn’t come from Ohio State University at all, but was recently found inside a Nazi dispatch case in a cave in Bavaria.

The bone damage done by multiple myeloma is often like the sea gently lapping at a big rock: each wave by itself does little, but after a few thousand years there’s no more lapping because there’s no more rock. Myeloma often works the in same way, so slowly eating away at our bones that we don’t immediately notice the erosion. When the inevitable début comes, it can come as a complete surprise. Such as when a pelvis break dropped me instantly to the ground in 1998.

Now I know what “insidious,” as in “of insidious onset,” really means. Even the freest nation on earth can be ruled by malefactors of great wealth if the erosion of liberty takes place sufficiently slowly. By the time the continuing loss becomes obvious, it can’t be stopped. 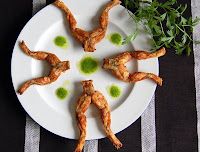 In a larger sense, however, myeloma is different. Early discovery offers no survival advantage. Indeed, early treatment is more likely to shorten life rather than extend it. Early treatment is by definition unnecessarily risky. What other cancer is like that? Imagine our poor frog — even if he manages to jump out of the experimental pot as soon as he discovers he’s in it, he’ll be sautée de grenouille by nightfall.

Myeloma is a tale of heroic but temporary victories amidst a string of increasing losses. Of course, I’m not solely referring to direct, physical damage, but also to indirect damage wreaked on everything else. Myeloma and its chemotherapies spare little. Declining vision keeps us inside at night, neuropathy and spinal damage stops the dancing, our ears ring, our kidneys fail, our immune systems offer little protection from disease. Relationships are stressed. Eventually, everything in life becomes, in a sense, malignant.

In the fall of 2009, while circling in the bowl, exhausting my every avenue of escape, a lifeboat was unexpectedly thrown to me. I scrambled in without hesitation. Luckily, during the descent I missed the rocks at the bottom of the veritable Niagara Falls of treatments, an allogeneic transplant from a matched but unrelated donor. Through the increased depth of field available from the lens of recovery, I have become more aware of the subtler losses sustained over the last twelve and a half years. I don’t dwell on them. What I do dwell on are the enriching qualities of life being returned to me. Because the individual losses were seemingly small and were accrued slowly, I had forgotten how diminished my life had become.

Survival brings with it existential redemption. The accelerating return to importance of life’s mundane challenges is annoyingly wonderful.  In my illness, they simply weren’t important. Now I find myself coping with a raft of them: helping a daughter who is struggling with algebra, extracting a much-needed refund from a reluctant IRS,  repairing water damage to the stucco, preparing the garden for this year’s tomatoes, scheduling a long-deferred refraction. All these are signs of a new and greater normal that is being formed, one that reflects the end of a long period of fundamental disturbance and marks the beginning, I hope, of a sustained period of simple living.