Skip to content
We are the boys who’ll drape you in jewels, cut off your hair and throw out your shoes, ‘cause baby, you won’t need them, where you’ll be
All the king’s men – Wild Beasts *
I figure some of you reading this do not want or need long essays from me. If you’re following simply to know I am ok,  I’m grateful – thanks for caring. For you, a short read…
<short>

Cycle 1 is going ok. The lack of side effects, combined with the simplicity of taking pills, rather than intravenous drips, injections, picc line etc, is leading to something of a reverse placebo effect. The drugs had better work, because I find it hard to believe in them, having been conditioned to old school chemo. It’s a bit disconcerting to find myself taking what appears to be medicine.

That said, the steroids are not very nice – making a mess of my Thursdays and Fridays. But more about that another day. And I’ve been having quite a bit of trouble with pain and spasms in my lower back. My mobility is rubbish, and it hurts a lot. Very frustrating. Still, I’m optimistic the pain will be quelled after a couple of cycles, and if the next few months is like this, it’s not so bad.

Still reading? How nice! Even so, I guess you don’t want or need a blow by blow of my days and weeks. Instead, I thought it might be of interest to give a bit of a summary of the drugs I’m on, seeing as I’m in a drug-taking phase of my myeloma. I’m going to start from the top, with the ixazomib. I take one 4mg pill of ixazomib each week, 3 weeks on 1 week off. And if I am selected in the clinical trial to receive “augmented” or “maintenance” treatment, it will be with ixazomib. 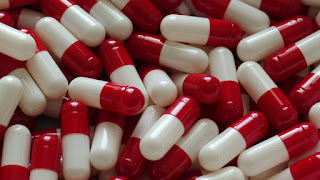 The first proteasome inhibitor developed was bortezomib. I took this last time. It was only developed from 2003 so it’s a very new branch of medicine. Before it came on the scene, myeloma had very short life expectancy, and the main drugs prescribed were unsophisticated, generic “chemo”. Proteasome inhibitors are the reason I’m still here.

Ixazomib is even newer – it was only registered as a potential treatment in 2011. When I was newly diagnosed (2012) I kept a list of innovative treatments when I heard about them – part of my armoury towards becoming an engaged patient. (I’ve stopped keeping this list because it got too long – I realised that merely knowing the names of possible medicines was not what would empower me.) At the time I wrote of ixazomib simply
“Ixazomib (MLN9708) (can be taken orally) FDA approval projected 2015.”
In fact, approval came a little later, in 2017 in Europe. NICE only consented for the NHS to pay for it as of November – 3 months ago! UK funding so far is for people who’ve had more treatment than me – I wouldn’t be eligible yet, so I’m only getting it as part of a clinical trial. The drug company is providing the drugs. Saving the NHS some money. And a good thing too, as the wholesale price is otherwise £2,000 per pill. (Indeed, that’s how I got my drugs last time round, too – thrifty me.)

Proteasome inhibitors don’t have the potential to be a cure, but they do have the potential to improve responses. The trial is, in part, to investigate whether proteasome inhibitors can improve the outcome of stem cell transplant. It’s part of the transition from chemo to medicine. It seems weird now to believe that in future myeloma treatment may actually make one feel better, rather than worse. Something I look forward to getting used to. Though that is not to discount the one very real and very horrid potential side effect of these drugs, which is peripheral neuropathy – the sometimes permanent loss of feeling in hands and feet. I’m lucky not to have suffered much of this. And ixazomib, taken orally, is less likely to cause neuropathy than bortezomib.

These drugs are miracles, really. I am so very grateful they existed by the time I developed myeloma. The story, otherwise, would probably have been shorter.

The exotic names are striking. There is a nomenclature such that you can tell something about a drug from the end of its name. A “…mib” is a proteasome inhibitor. Other classes of drugs have their own suffixes. For example, a “…mab” is a monoclonal antibody. The syllable before that tells you if it is human (u), humanised (zu) or chimeric (xi). (Chimeric meaning of mixed human and animal origin). The syllable before that, in some drugs, tells you if it acts directly on the tumour (li) or on the whole system (zum). So a “…zumumab” is a systemic, human origin monoclonal antibody. And a “…zomib” is a humanised proteasome inhibitor. So now you know!

So far there are three “…zomib”s in use. The two I’ve had act on the same part of the proteasome – they are functionally the same. Whereas the third – carfilzomib – works slightly differently, meaning it is another potential treatment for me, when I need it. There are several more ”…zomib”s currently in trial, including marizomib and oprozomib. Things to try, one day, if I’m lucky!

* I’m off to a gig, tomorrow! Pragmatism dictates we’ll be in the seated area. Wild Beasts are a band I’ve loved for a long time, now sadly split. Tomorrow is the last time they’ll play. If this lyric is contorted into a dialm metaphor, then the drugs are the boys (and I am the girl from Hounslow. Hatch me! Hatch me!)…