Little to report. Today’s activity is much like yesterday’s (except the TV schedule is different). Those following the ticker will do well to observe the small print that “counts may go up as well as down”, and the trader’s tip that “the hot money is going short on neutrophils right now”. (Not sure I like the mental image I’ve just created, of Blood Count Traders. But the idea is out now, I can’t unmake it. I could choose to not share it, but I don’t.) What I mean is, my scores are basically unmoved today, but that can’t last much longer. The test was at 6am – anything may have happened in the last 15 hours. 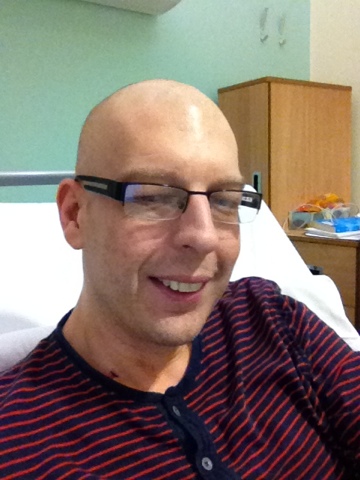 My wife and my mother (and no man can argue successfully against both simultaneously) have told me that my last mugshot was a poor representation of my condition. In my defence I should point out that at the time I had a bad rash caused by the fact that I’d just had a stem cell transplant (did I mention that?) and a great big dressing over the place where someone had hacked a hole in my neck (did I mention that too?)

But anyway, here’s an alternative pic. I hope you like it. I had to take it several times to get one with only one chin. I’m doing fine here, and those who have visited will have seen that this is a bit like living in a hotel, with endless room service and new bed sheets every day. Except in hotels it is my custom to pee directly in the toilet. And if hotel chamber maids insisted on giving me injections, I’d probably check out.

Thanks for all the comments and messages – both on the blog and via fb. I’m not going to attempt to respond to them all. But I’ve appreciated the thoughts (from 6 continents! People of Antarctica, your indifference has been noted. No Christmas card for you). There is nothing more important in life than having the support of friends and family. Also, some messages from others living with myeloma, which are always a source of solace.

(Anyone interested in a wider view of the myeloma world? Check out myelomablogs.org)