If you want just the short update here, it’s extremely simple: I’m still taking my chemo. I’m feeling much better than a month ago, though still pretty fragile. But while I’m still able to pop my pills, we are at least in some kind of rhythm at last. I daren’t do much for fear of provoking another crisis and disrupting my treatment plan again. For it would be pretty disastrous if that were to happen again now. So, I’m living quietly, cautiously. It’s a bit dull, and quite frustrating, but it is leagues better than my quality of life for most of the year so far. Barring any major drama, I’m hoping I will continue like this – popping pills and laying low – until the end of August.

What follows may be of interest to some… though there’s a possibility it is entirely DEX talk.

My myeloma is only measurable through light chains. Most people’s myeloma is also measurable through Ig paraproteins. It’s mostly a nerdy distinction – only relevant to us patients as we swap statistics. But it does have a couple of real world consequences for the experience of being treated for, and living with, the disease. The light chain (“SFLC”) test is very volatile. You could test today, and repeat tomorrow, and get a significantly different result. It jumps about. It’s noisy data. Added to this is the complication that light chain tests take several days. So one is always working with old data. We never know the situation as of now. (If one had Ig paraproteins, detectable via a “SPEP” test, one would have neither of these issues.)

My myeloma is also, I’ve learned as I’ve lived with it, slow, stubborn and indecisive. Some people have a cycle or two of chemo and their numbers plummet. Not me. This isn’t necessarily a bad thing – the prof told me long ago that some myelomas are faster moving than others, but faster on the way down can equal faster on the way up too. And overall, if he’s right (and I believe he is), then I’m more than happy to have slow-to-remit, if the pay off is, as it has seemed to be, slow-to-relapse.

But, it does make it frustrating to live with. Only 3 weeks ago, armed with my results from two cycles of treatment (and a month out of treatment while I spluttered with infection), one of my consultants, was talking pessimistically about abandoning my chemo entirely, on the basis that it wasn’t really working. We’d been going for 4 months, and my light chains had dropped from 750 to 550 – a response which merely qualifies as “stable disease”. All that grief, for not much result! He was seriously exploring with  me whether or not to simply rush me to transplant.

Twelve days later, with one more result available, and sitting with my other consultant, we were in much more optimistic mood. (For reasons I can’t be bothered to explain, I’ve managed to get myself in the complicated situation of being under the care of two experts at once, right now.) Now the headline was 368, which, being a >50% reduction from our January “baseline”, counted as “Partial Response” (“PR”). He was telling me that emerging evidence suggests ixazomib’s response profile may be slower at the start than some other treatments. That, combined with my myeloma’s known stubbornness… would all explain why it was just taking time. But finally, 3 cycles in, it appears it is responding. This narrative ties in nicely with the fact that I’ve been feeling a lot better. And it puts us back on the pathway of continuing my chemo regime until the end of August.

So, it would have been nice, when the next result came in, for it to confirm this trend, to back up this story, to give us a bit more certainty. But here’s the bit where my personal variant of myeloma does what it always does: fails to be conclusive. It’s foolish to await a light chain test with a number in one’s head. Foolish, but inevitable. The number in my head most certainly was not 468. That is a jump back up, which no longer even qualifies as a “response”. I suppose, having lived with it so long now, having had so so many inconclusive results, I should really have anticipated this. Instead, I found myself thrown back in to uncertainty. Is the chemo even working?

I’ve calmed down again now. Despite the noisy data, one thing we can say with absolute confidence is that all three cycles of chemo I have completed so far, have finished with fewer light chains than they started. In that sense, the chemo is most certainly working, and we should clearly carry on. (I’m probably tempting fate by saying this… and cycle 4 will inconclusively move in the other direction. I really wouldn’t put it beyond my myeloma to do that.)

So… a lot of angst later for me, and we are where we were already – popping pills and laying low. Mentally, though, it’s one hell of an endless ordeal. 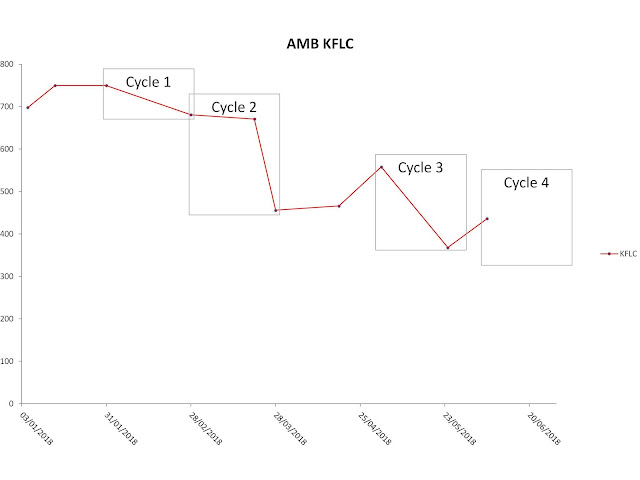 * I could probably do with a bit of Pru Farrow’s meditative zeal, right now.