Skip to content
Roundup herbicide (glyphosate) is in our air, rain, groundwater, soil and most food in the U.S., and an increasing body of research reveals it has cancer-promoting properties.
Researchers from the Indian Institute of Toxicology Research have recently confirmed the carcinogenic potential of Roundup herbicide using human skin cells (HaCaT ) exposed to extremely low concentrations of the world’s best selling herbicide.
The researchers previously reported on glyphosate’s tumor promoting potential in a two-stage mouse skin carcinogenesis model[i] through its disruption of proteins that regulate calcium (Ca2+- ) signaling and oxidative stress (SOD 1), but were unable in these investigations to identify the exact molecular mechanisms behind how glyphosate contributes to tumor promotion.
The new study, published in the peer-reviewed journal ISRN Dermatology,[ii] sought out to clarify the exact mode of tumorigenic action, finding the likely mechanism behind glyphosate’s cancer promoting properties is through the downregulation of mitochondrial apoptotic (self-destructive) signaling pathways, as well as through the disruption of a wide range of cell signaling and regulatory components. Cell proliferative effects were induced by concentrations lower than .1 mM, and as low as 0.01 mM, which is four orders of magnitude lower than concentrations commonly used in GM agricultural applications (e.g. 50 mM). The fact that lower concentrations were more effective at inducing proliferation than higher concentrations (which suppressed cell growth), indicates that Roundup is a potent endocrine disrupter, and further highlights why conventional toxicological risk assessments are inadequate because they do not account for the fact that as concentrations are reducedcertain types of toxicity — e.g. endocrine disruption — actually increase.
The researchers used the product Roundup Original (glyphosate 41%, polyethoxethyleneamine (POEA) ≅15%—Monsanto Company, St. Louis, MO, USA), and observed the following changes to human skin cells induced through exposure to this chemical mixture:
It is important to emphasize that while the researchers observed cell proliferation-associated changes in the expression of the Ca2+- binding proteins S100A6/A9 following glyphosate exposure to human skin cells, the implications of these findings reach beyond the skin cell lineage. They explained that related modifications of the expression pattern of S100A6/A9 protein have also been found in “hepatocellular carcinoma [15], lung cancer [16], colorectal cancer [17], and melanoma [18].”
The study included a diagram (shown below) representing graphically the multiple ways in which glyphosate disrupts cellular structure/function to contribute to uncontrolled cell proliferation. 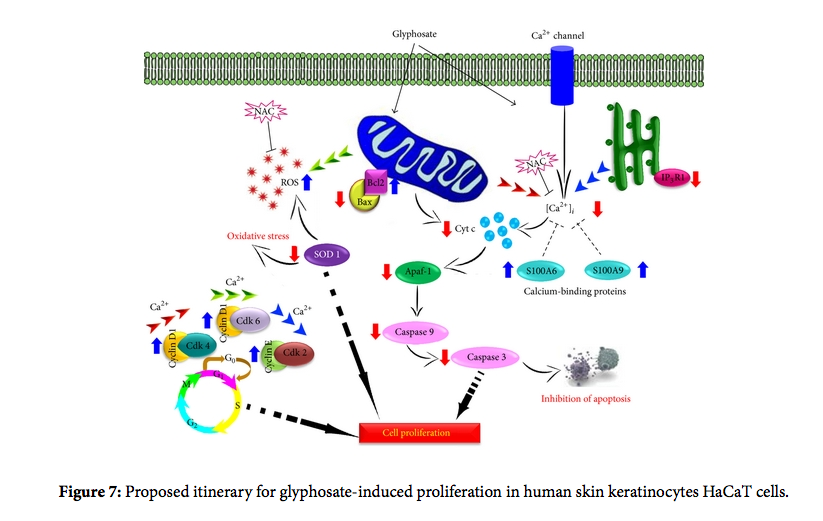 The researchers summarized their findings as follows:

In conclusion, in this study, we demonstrated that glyphosate may possibly exert proliferative effect in HaCaT cells by activating Ca2+ binding proteins to promote the imbalance of intracellular Ca2+ homeostasis and lessen SOD1 to increase ROS generation. This effect was partially reversed by treatment with antioxidant NAC indicating connections between oxidative stress and hypocalcaemia. Reduced Ca2+ levels enhance Bcl-2 and decrease Bax, subsequently leading to decrease in cytochrome c to stimulate further decrease of caspase 3 via the downregulation of IP3R1 level, thus halting apoptosis. The present study for the first time provides insight into the mechanism of glyphosate-induced neoplastic potential in mammalian skin system.

It should be noted that their observation that the carcinogenicity of Roundup may be suppressed by the antioxidant n-acetyl-cysteine (NAC), which is a precursor to the cellular detoxifier and antioxidant known as glutathione and a readily available dietary supplement, has important implications, owing to how widespread exposure to Roundup herbicide has become, both throughenvironmental exposures in air, soil, rain and groundwater, as well as in the tens of thousands of unlabeled products containing GM ingredients contaminated with physiologically significant levels of this chemical. 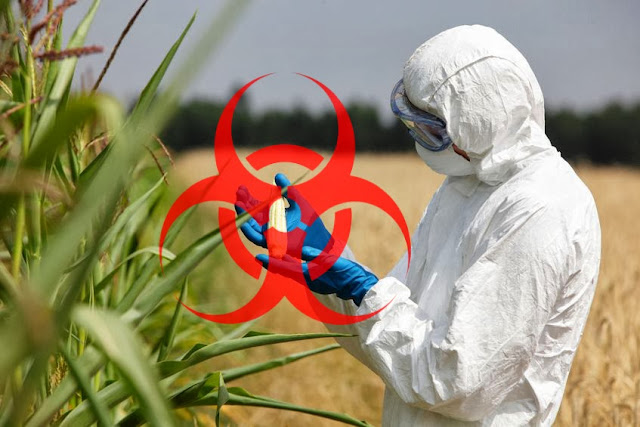 This study adds to a growing body of research demonstrating the carcinogenicity of Roundup herbicide. Only five months ago, the journal Food and Chemical Toxicology published a study indicating that glyphosate is estrogenic anddrives breast cancer cell proliferation in the parts-per-trillion range. To view the growing body of research on Roundup’s potential to contribute to cancer initiation or promotion view our toxicology citations here: Roundup Toxicology Research.

Reflecting on the Implications

We leave the reader with some final reflections on the implications of this research. The wholesale dismissal of attempts to differentiate GMO from conventional products through accurate labeling is based on the idea that they are ‘substantially equivalent.’ But, this fallacious approach is based on the mistaken view that the only difference between GMO and non-GMO crops of feed and food importance is the presence of either the novel transgenes inserted into them or their novel transgene protein products.
The discover of Roundup’s extreme toxicity destroys that argument, and calls into question the credibility of any would-be ‘scientist’ or pro-GMO advocate who would propose otherwise.  How so? The fact is that the majority of approved GM plants have been genetically engineered to be “Roundup Ready,” i.e. resistant to glyphosate, which means that the land they are grown upon is basically carpet-bombed with the chemical mixture to kill any living plant other than the glyphosate-resistant GM monocultures. The GM plants take up glyphosate, convert some of it to a similarly toxic metabolite AMPA, and survive the chemical exposure, while maintaining residues of both chemicals post-harvest — which ultimately means that the consumer will be exposed to these compounds through their food.
This means that if you are not consuming foods that are explicitly GM free, you are being exposed to glyphosate (and glyphosate metabolites) on a daily basis. The difference, therefore between GMO and non-GMO is vastly more significant than simply the presence or absence of novel transgenes or their proteins.  It is the difference, candidly, between being exposed (poisoned) with a chemical with likely carcinogenicity or not being exposed to it.  For a more elaborate explanation read: Extreme Toxicity of Roundup Destroys GM/non-GM ‘Substantial Equivalence’ Argument.
Lastly, consider if Roundup (glyphosate) ‘weed-killer’ bore a warning sign ‘may cause cancer,’ or the tens thousands of products made with GM ingredients contaminated with it. Would there be any justifiable reason to resist GMO labeling? No, to the contrary, the focus would be on banning them immediately, instead of cow-towing to the powers that be to allow us the choice not to be poisoned by default.
Despite the so called “science” and “reason” based GMO proponents who think it makes sense to have mattresses labeled, but not food you put into your body, the actual empirical, peer-reviewed and published research – not ghost-written or funded by biotech corporations themselves – says that this omnipresent herbicide has multiple models of carcinogenicity, and in concentration ranges far below agricultural application, as far down as to the parts-per-trillion range. It is time those paying lip service to the ‘evidence-based’ model of GMO risk assessment, and who recklessly promote the dystopian interests of biotech corporations, address the evidence itself, or stop co-opting powerful sounding terms like “Science” to justify their highly irrational and ultimately biased and self-serving perspectives on the subject.
EVIL MONSANTO