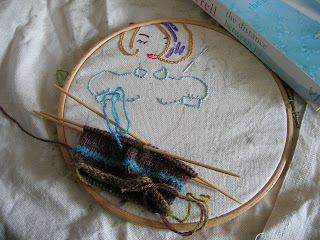 Finished “The Distance Between Us” by Maggie O’Farrell (it’s OK, but not as good as “The Hand That First Held Mine)”

We saw The Big Female Cheese, which always feels like such a relief and just doesn’t happen often enough. I trust this lady. She can be a bit, um, assertive at times, but I suppose that is why she is such a Big Cheese.

So she asked FL all the questions that ought to be asked about how he has been feeling (makes a change, eh?!) and explained that he would be prescribed Revlimid again, and for the foreseeable future, because of the continuing improvement in his Myeloma.

Hang on a minute – what did she just say?

We may have stared at her in disbelief. I may have developed a cut-glass clipped English accent as I asked her to tell me exactly what FL’s Kappa score was, because we had understood that his condition was getting worse and not better…? She fixed me with a very serious gaze and asked what number I had been watching. “His Kappa score, and we were told it was rising.”

Ah – but was it his “derived Kappa score”? Doctor, I have no idea. I asked your colleague for his Kappa Score and she told me a number and that it was higher than the previous month’s number, which was a Bad Thing.

And here is what The Big Female Cheese said: “Ah well, I and many of my colleagues prefer to use the “derived Kappa score” as an indicator of progression, because it is much more accurate. In this case, FL’s latest derived score is 251.4 which is considerably lower than the 495.7 of February, and he is therefore improving.”

She then went on to say that “some patients stay on Revlimid for two years with no problems”, which is the nearest thing we have ever heard to positive talk from any of these Doctors in, oh, at least two years. She didn’t say “You have just won the lottery and everything is going to be fine” but she DID say “There is no need to send FL’s blood to Birmingham”. Which kind of suggests she thinks we have turned a corner, I think? Does it? Oh who knows!

And his haemoglobin is “the best it has been for a long time” at 114.

So we are … relieved? Confused? And extremely angry about the misinterpretation of the numbers by her junior colleague last month and the month before. We have spent the last two months telling friends and family that things are going downhill, and that maybe by Christmas FL would be in serious Myeloma trouble. Which is NOT a fact. It is not even a rumour.

Today, we were offered a feedback form by the Receptionist. We filled it in. We did not mince our words on the need to supervise Junior Doctors and ensure that they check with senior colleagues if they aren’t sure about the answer to a question.

Because this is somebody’s life they are making guesses about, and the emotional effect has been significant. FL has been “taking it easy” for the last two months in the belief that he was on the way out. He has only golfed twice in the past month and he has spent most of his days asleep and most of his nights awake. He was completely convinced that today he would be told he couldn’t have any more Revlimid because he was too ill. So, this is going to take some getting used to.

8pm Tuesday evening: where is he now? At the pub with his pals. Do you blame him?!