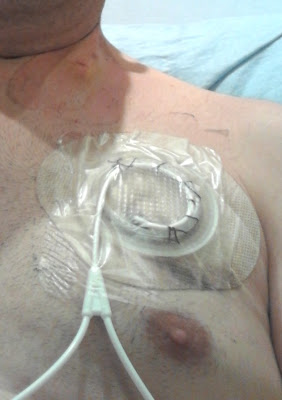 I thought I would give you an update as to what happened with my Hickman Lines.

Prior to coming into the Royal I had a new line fitted in Chester, the reason being that last one I had for nearly 7 months I got an infection in, Which was a shame as it worked really well and I never had any problems with it, that was also fitted at Chester.

When I cam around after Chester fitted the line on the Wednesday prior to coming in I was surprised to see the way they had secured it. They used what is called a stoma ring, which is normally used for colostomy bag, stuck it to my chest and then secured the line to it with several sutures (stitches).

Chester did test it to make sure it was working, but struggled to get blood out. It certainly wasn’t flowing as well as my last one.