Yes I admit it, until relatively recently (if you can call 10 years recent) I was pretty much a no vegetables kind of gal. I would spear the odd carrot or rustle a few peas when eating out, but when it came to eating at home I didn’t bother. Then through a combination of growing my own and the never ending cookery programmes which made veggies look good to eat I started trying out a few. Still I tended to stick to the same ones.

When I went to my son’s Christmas Day and his girlfriend presented us with braised red cabbage I politely tried what was one my plate. I was, at the age of 54, a red cabbage virgin! The only cabbage I had eaten previously was white cabbage, and that was in coleslaw or a kebab! Having helped with the prep I knew it had apple, cinnamon, onion and cider so I reckoned it couldn’t taste that bad. It was delicious!

So yesterday I bought myself a red cabbage and made myself “redslaw”. Red cabbage, red onion, red radish (well the skin is red) and carrot (okay not officially red, so why are ginger people called red heads?)* 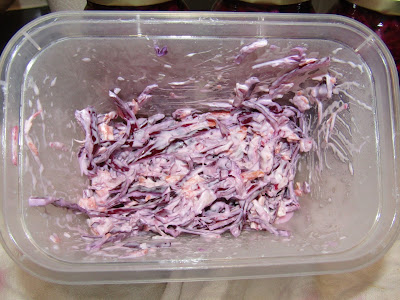 *No offence is meant or intended, I have been ginger myself!

I tried it last night with my evening meal, the rest is for homemade burgers this evening. I enjoyed it so much that rather than throw the rest of the red cabbage away (it sits around forever in the fridge) I would pickle it. I took on board the recipe used by A. on Christmas Day and used cider vinegar along with cinnamon sticks, star anise and cloves. I hope it tastes as good as it looks, I’ll let you all know in 3 weeks. 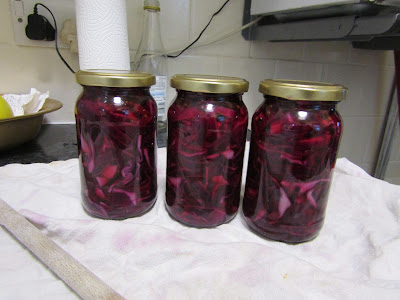