Just days ago (12.30.17), I “celebrated” my 8 year Myeloma diagnosis anniversary. Whoohoo! Soon after that, the world clock turned over to 2018, and we all celebrated the fresh new year.
I was looking forward to telling you of all my 8 related plans, 8 celebrations, 8 wonderful everything to come, as I launched in to 2018- my 8th year battling Myeloma. But sadly, the beginning of year 8 and 2018, has only brought many uses for a strong word that rhymes with 8: 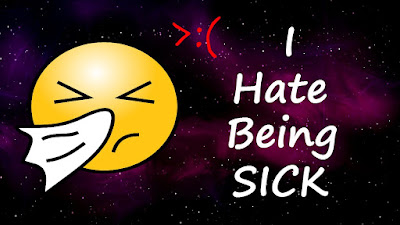 Yes, “Year 8”, and just days into 2018, I bit the dust again. I hate you myeloma. I hate always being sick. I hate always worrying about getting sick. I hate my frail, delicate, compromised immune system.  I hate how you’ve stolen my life myeloma. I hate how I got sick AGAIN! And I HATE the pain I experience, sabotaging what little Quality of Life I have, as I enter Year 8…

Days before my 8 year anniversary, I felt I was coming down with another “head cold”. I had all those yucky upper respiratory symptoms, but not bad. I tried to deny it away, think it away, Vitamin C it away. Hot lemon and honey tea it away. Eat well it away. Hydrate it away. But no, this nasty vicious bug invaded deep, and here I am, January 8, 2018 suffering like I haven’t in a very long time…

Yep, I had a slight sore throat, slight headache, slight runny, sneezy nose, slight congestion, slight fever, but never over 100.2, … then BOOM! It hit… Omg, “It” turned into a cough that I can’t even describe. It wasn’t horribly deep at first, but it was constant. It was raspy, and scratchy, then it became deep, congested and gut twisting. And it persisted. It attacked me morning, noon, night. Middle of the night was the worst. You know those gut heaving coughs, were you can’t stop coughing, combined with dry heaves because you’re coughing so hard, combined with sneezes, combined with peeing in your PJs, because you’re coughing so hard! Yep, that’s been me this last week. So miserable… so angry, so frustrated, so confused why I am being constantly challenged and “tortured”, in so many ways…

But on top of all the misery, when coughing, I bent wrong, twisted wrong, creating monster pinched nerves, pulled muscles, bruised ribs, from this vicious cough. Started on the left back side ribs, then just as that seemed to get better, it moved to my right side ribs, and upper chest area. Jumping around from body part to body part. Front to back, stabbing me, seizing me, pinching me, doubling me over in spasms of pain, at all times, and every time I coughed. Pain that brought me to tears. Tears of pain burning my eyes. Tears of mental exhaustion, representing 8 years of unwanted challenges. Challenges that seem unending. Unending forever-ness of myeloma’s rage and revenge.

My fever broke a within a few days, and thankfully, it never reached the ridiculousness of November’s high of 103. But this time I was coughing my guts out. It was “productive”, but intense. I always leaned and bent over while coughing, so as to not pull any additional nerves and muscles. I coughed and cussed at the same time. I coughed and cried at the same time. I think I cussed more than I cried. It was miserable. I just don’t understand why our bodies betray us so much…

So on Saturday, I felt ok enough to resume ranch chores, as by this time, Jim had the bug, feeling worse than me now, son Scott had a fever again, and daughter Alissa was out of town, so I thought I would be ok cleaning the arena. As I forked and raked the horse apples, I felt strange take your breath away twinges in my back left side. I just thought it was tight from all my awkward coughs, so I continued. But as I continued, it got worse. The PAIN took my breath away. Literally, stole my breath away. I could hardly breathe. If I coughed I thought I would seize and die right there, falling into and under a horse, or into a pile of poop.

I stopped in shock at how much pain I was feeling. See with my IgA myeloma, so far I’ve been very very lucky to only have minimal bone involvement. I haven’t experienced the broken, cracked, lesion- honeycomb bone issues most have with myeloma.  I have had a lot of muscular, pinched nerve issues, but I’ve attributed that to the side effects of 8 years of treatments, medications, steroids, etc. But this pain was something else. I could barely make it back into the house.

I wondered if this was “it”? Had my time come. Did all my “bragging” about making it to my 8th year come back to bite me. Was I going to collapse and die in my kitchen alone, and no one would know what happened to me?

I reached for my Albuterol inhaler, and took a couple puffs of that. I tried deep breathing, but that only stimulated coughs, which sent me in to a coughing spasm that I was sure was going to kill me from pain. And then suddenly, one of those crazy intense (deep and shallow at the same time) coughs attacked me, above and beyond the cough I was already coughing. The type that also includes a sneeze reaction at the same time, which then throws your body in chaos and you’re coughing, sneezing, peeing and gagging all at the same time. The pain and multiple body seizing was too much for me, and tears flowed, as did the pee. I was a wreck. My body owned me, and I was losing it. I really thought this was “it”…

As I’m learning over the kitchen sink choking, gagging, coughing, crying, sneezing, making all kinds of awful noises, our little rescue doggie Nala was standing right by my feet watching me, with the most confused and concerned and scared look on her face. I didn’t even have the voice or breath to console her and let her know I was ok. It was really sweet. She was really confused. About that time, Jim hobbled in, and was very concerned, as he heard me from down the hallway. I couldn’t talk to tell him what was happening. All I could do was continue with my spastic spasm, and try to point and motion about what was going on.

Eventually my multi symptom cough lessened and I tried to briefly, hoarsely, tell him what was going on, as I got out Advil, Tylenol, Flexeril, and the inhaler. And took one of each.Willing these meds to give me a break, to extinguish the pain, to let me live. See, I keep kid’s Jr strength “fast melts”, “melt-a-ways” close at hand always, as in cases like this, or GI issues, swallowing pills is not an option! So I took a few of whichever, I forget now, and sobbed my way to the bathroom to change.

There I slathered myself in BenGay and Vicks vapor rub too. I was a wreck, and I felt “this might just be it”… It’s really scary when you can’t catch your breath, can’t breathe, or control your body’s reactions.

But it wasn’t “it”, and I made through the night in horrific pain, but I made it. After I woke up, after a restless, painful, coughing night, I suddenly thought about my best friend and nemesis DEXAMETHASONE STEROIDS! Yes! the magical monster Anti Inflammatory to the rescue. But with all this other stuff in me, and how awful I felt, I didn’t want to take my full “regular dose”, so I only took 2 pills of 4mg each, rather than the weekly dose of 5 pills @ 20mg. And I waited for the magic. Gradually, ever so gradually, I began to feel RELIEF! The seized nerves and muscles, spasm-ed less. The pain receded a bit, and I heard a few useful cracks as I moved around more. And more. And more. And within several hours, that life altering pain, was now a pinching dull ache.

I moved very gingerly about all day, not doing much at all, sitting with a heating pad most of the day, trying to keep hydrated and eat something to build my strength up. Yes, I still had the awful cough, but manageable since the pain was dull. I still coughed, but never as intense as yesterday. But as I write this, 12+ hours out from Dex steroids, I can already feel the angry nerves and muscles trying to bite back… I have no idea what today will bring… but I know one thing, I can’t do round #2 of that horrific pain…

==============
ORIGINALLY… this post was going to be short, with a brief good news myeloma lab report and cute pictures from my year 8 anniversary celebration from 12.30.17. But as you’ve read, a lot happened that I just couldn’t cheat you out of :)) If you’ve read this far, thank you. Thank you for caring about my crazy life stories. And now for some good news: 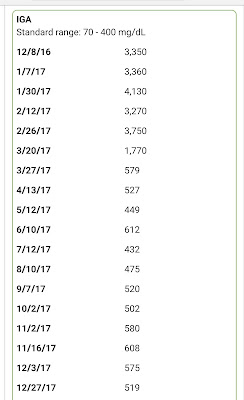 Unbelievable! And these labs were taken late December 2017
just as my new vicious bug was revving up! 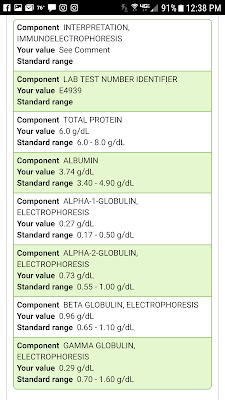 And still no M Protein detected!
How crazy are those results! And, most of my CBCs and organ stats are normal or near the low end of normal. Unbelievable how I can be so “sick”, but still doing so well on Darzalez, Pomalyst, Dex steroids. Thank you chemicals and traditional medical science! More labs on Tuesday, and make up Darzalex infusion on Wednesday Jan 10, as I was supposed to go last Wednesday Jan 2, but you can see why that wasn’t possible!
As I recall, I started feeling sick December 28, then somewhat ok on Dec 30 for a quick lunch celebration for my 8th diagnosis, survival anniversary. Then it’s been all down hill from there. So let’s end on a happy note, and hope that I don’t have a re-do of my coughing, seizing “this is “it” drama! 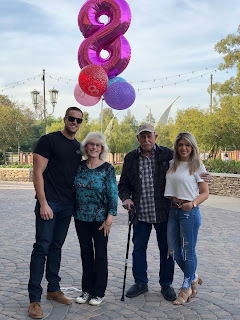 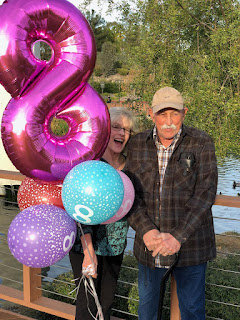 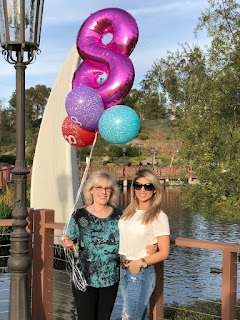 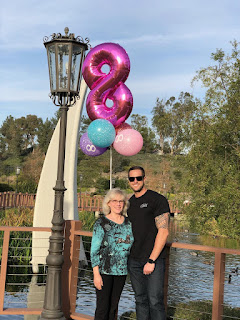 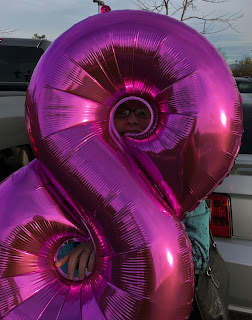 Good Bye 7’s
Hello Crazy 8″s
Live happy, live well, and make a difference somewhere, somehow,
with someone or something as often as you can!