Or should that be Happy Birthday Photo Friday!

Today is Mike’s birthday. It is also Deb’s, Happy Birthday Deb. For those in the club, each birthday is a major milestone and where once they might have dreaded “another year older” birthdays are great markers to be celebrated even if it means you’re older.

Three years ago we were waiting for Mike’s “official” diagnosis but we had been given a rather nifty leaflet entitled “Lymphoma, Leukaemia and Myeloma” so we had kind of guessed things weren’t looking too rosy and I for one was in the depths of despair and had a general “this will be his last” attitude.  Of course as is so often the case, I was wrong, thank goodness.

Two years ago Mike had literally just come out of hospital after his SCT and celebrating was the last thing on his mind.

Last year Mike was still getting over a chest infection so I think that this year is probably the first birthday since 2009, that Mike and I have really both felt up to celebrating.

So this morning I have been baking Mike a fruitcake and because not everyone likes fruitcake I’ve made cupcakes too. I reckon the day is special enough for me to forget the diet for one day and any way, today is the last birthday in the house until May when we celebrate Toni’s and then middle daughter’s within a couple of days of each other. 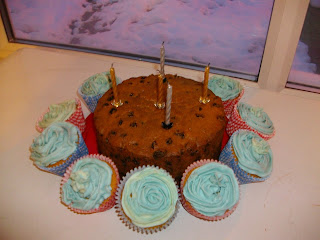