In my montage the other day, I missed a crucial part of my transplant tale. A superficial, vanity riddled part, but crucial all the same. My hair loss and how I am coping with it. I have obviously been through this process before, I lost my hair in 2013 and again in 2013 (not a typo) and despite my initial fear, I enjoyed being something of a chameleon with whatever was on or off my head. If anybody had asked me in 2014 what I thought of my hair loss, I would say that it turned out to be far better than I had anticipated. Fast forward to 2015 and I do not know how I feel about losing my hair. I can’t decide. Trust me, indesicion is something I am familiar with.

It took a while, but I had fallen head over heals in love with my new curly hair. Had the transplant not happened, I was just a few months shy of reaching my goal of a ‘do reminiscent of Michelle Pfieffer in Married to the Mob, post husband’s murder. But that was not to be.

In an attempt to take control of the uncontrollable, I had a friend shave off my hair, a day after it started to fall out with the greatest of haste on Day +12. It happened that quickly. Some members of the Network told me to wait, for they thought there was a chance I wouldn’t lose all of it, but the thought of leaving clumps of my hair all over Tottenham Court Road was too much to bear.

In two days, my hair went from full and bushy to a Number 3 crop.

Why a Number 3 and not a full head shave? Well, on the advice of the lovely Macmillan Support workers, alopecia needs a helping hand. In order to lose my hair with the minimum amount of trouble, I needed to keep some weight so that it could fall out naturally. As naturally as chemically induced hair loss can be. So there I was on Day +12 with less hair than I had on Day 0, but still with hair. You will note from the complication above, the slugs that make up my eyebrows went absolutely nowhere.

Over the next seven days, my hair quickly left my follicles and made it’s way to whatever surface I was in the presence of. A lint roll proved to be an invaluable tool during this time, especially for use on my beds, and don’t even get me started on the power of the Electronic Power Sweeper… Mamma Jones likened the situation to having a black Labrador in the house. The fact I enjoyed pulling my short hair out of my head marginally dulled how depressing it was to see evidence of a hair massacre everywhere I went. Hair today, gone tomorrow. 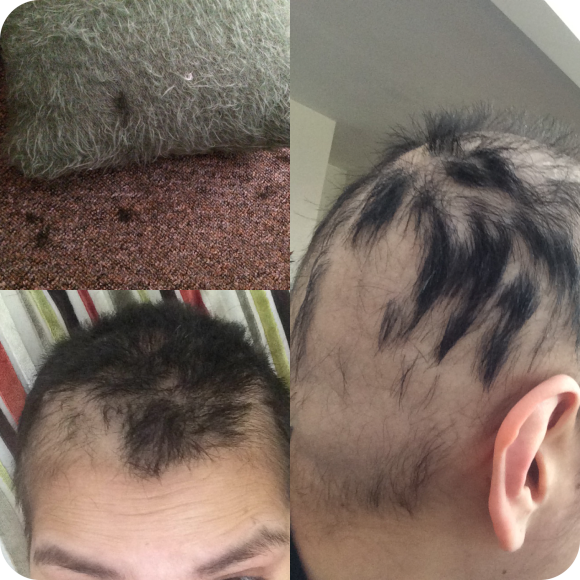 The whole process took eight days. Eight long days. I lost the hair on my head and another area of my body, but it remained everywhere else. It’s not growing anywhere else, but sadly, the beard, moustache and somewhat dastardly, my sideburns remained. That’s right, sideburns. Unlike events of 2013, I kept my sideburns and more strangely  than that, my hair line. To all intents and purposes, I was bald, bar circular line from my forehead round the back of my head (along with the side burns and a few stray hairs). It was a style that screamed cancer. Squarked it, actually. Thus, it was necessary to get those clippers out one last time to remove my hair line and some of the sideburns, not all the sideburns as I do not want stubble on my face. The side burn issue is a situatuon most unfortunate.

Once I was bald, and able to hit the streets, I encountered another hurdle, a daily hurdle. What to wear? In 2013, I think I found baldness something of a novelty. I enjoyed wearing my collection of wigs. At times, I found it fun. I do not remember feeling as self conscious about it as I do now. I am finding that with or without a wig, I feel self conscious. It’s not a dressing up game. I imagine the world secretly pointing at me saying that is a bad wig, or laughing at the fat crease at the back of my bald head. Early on in this process, I went on a day trip to Tesco, naked as it were and found strangers either stared at me, smiled and tilted their heads at me or worst still, tried and failed not to look at me. Either way, I felt their discomfort tenfold. Since then, whenever I am in public, I want to cower.

I very much wish I could just say “fuck it” and embrace my situation and play with it. Do not get me wrong, outwardly, I do vary between my wigs and baldness and leave the flat, but I am never not aware of it. The Afro wig I loved so much before, because it was so obviously not my natural hair, has become something like a nemesis. I am prone to exaggeration after all.

I’ll let you into a little secret, when one finds themselves without any hair, it doesn’t change them. My brain still works exactly how it did before and I enjoy all the same things.  If I am in the comfort of my own home, I feel whatever normal is. Hair holds no secret power to my personality. Well, it doesn’t until I look in a mirror and I am reminded that I now look like Shrek. Perhaps if my weight was not so unruly I would feel better, perhaps if I did not have to worry about the next transplant or my finances or my future employment, and everything else that keeps me awake at night, I would be able to not care about my baldness.

A relative of mind told me that I should wear my wigs to ‘feel pretty’. Feel pretty? Is that to say that I am not pretty without one? Has having cancer made me inherently ugly or just uglier? On the other hand, a friend of mine, on seeing me walk down a street with nothing on my head but my headphones, donning my Raybans and a healthy application of Ruby Woo on my face said I looked ‘swear word cool’. I don’t think he adopts the belief that femininity and beauty can only be achieved with a full head of hair. But, beauty is in the eye of the beholder and there are a lot of beholders out there.

The truth is, I see neither cool nor beauty when I look in the mirror. Yesterday, all I saw when I wiped condensation from my bathroom mirror post shower was Martin Sheen emerging from the swamp in Apocalypse Now.

It’s not an issue unique to me. Well, maybe not the Apocalypse Now bit. I read an article in Vogue Online last week about just this thing, hoping it would help me recapture the confidence I once felt (http://www.vogue.com/projects/13262618/hair-loss-women-cancer-chemotherapy-alopecia/?mbid=social_Instagram). It didn’t. I do not know how it made me feel, like a fraud maybe. I’m making all the right noises, doing all the right things, but the fakery does not seem to be working as much as I would like.

Until I am able to pull my socks up, I’ll gently stroke the prickles on my head and marvel at my dazzling collection of wigs.