I managed to keep my head (and my hair) for the next six months. By the time I got to the half term break in May and the start of a month’s study leave for ‘O’ levels I had a rather smart one length bob. It gave me confidence in myself, which is probably why a young man from an adjacent school actually started talking to me on the bus. I should mention here that since leaving primary school at 11 I had been in an all girl school.The only male in my life had been my granddad who died January 1976 and the only boy I had kissed had been the cause of my hair downfall.

The timing of course could have been better, I was supposed to be studying hard for exams, but over the next few weeks we went to a fair in the centre of Wolverhampton. “Wolverhampton Fiesta”. He came to my house for tea and I went to his. We even went to a 16th birthday party for one of his school chums in a community centre somewhere over by our schools. IP was my first boyfriend and as any teenager will know, it felt very real.
Over the exam period in June we  didn’t have the same exams on the same days, but on the days we did we would meet on the first bus and then walk the mile and a half to my school (his was just a bit further up the road). On the morning of my 16th birthday and the day of my Religious Studies exam we walked in the warm sunshine and he gave me a birthday present, a delicate heart suspended on a silver chain, a bit like this: 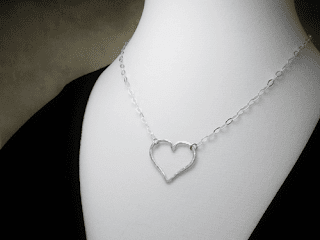 As you can imagine I was really happy. It lasted about fifteen minutes. As we got to the school gate he stopped and said “I don’t want to see you anymore” and walked off. Somehow I sobbed through my exam (and passed).
For the rest of the week I did my best to avoid seeing him. I got an earlier bus, went to a different bus stop and for that week I succeeded. The following week I tried getting a different bus altogether, even if it meant having to walk further to school, but it was worth a try. Big mistake, IP and his (new) girlfriend got on at the next stop. I looked the other way and spent the journey just ignoring them.
The following day I went back to my normal bus from town. As I got off outside school who should I see but IP and his girlfriend. She came forward and thrust a letter into my hand. I carried on walking, but once I got to school I opened it. Well its contents were what you would imagine an adolescent girl would write to a rival. Nasty in tone, how I should leave him a alone and stop following him (hang on they got on my bus). How he’d only been seeing me to make her jealous (they were together before me), he’d only taken me to the party to make her jealous. You get the drift. With a few more years wisdom I would have laughed in her face, but of course I didn’t. Instead I chopped off all my hair so they wouldn’t recognise me. I didn’t care that people thought I was a boy!
Bare63