Four weeks ago, 31 days ago to be precise, I swallowed what *might* be my last ever Ciclosporin tablet. It was a noteworthy moment. It was more than that, it was a milestone that warranted me taking a badly lit photograph to commit said moment to my iCloud memory. 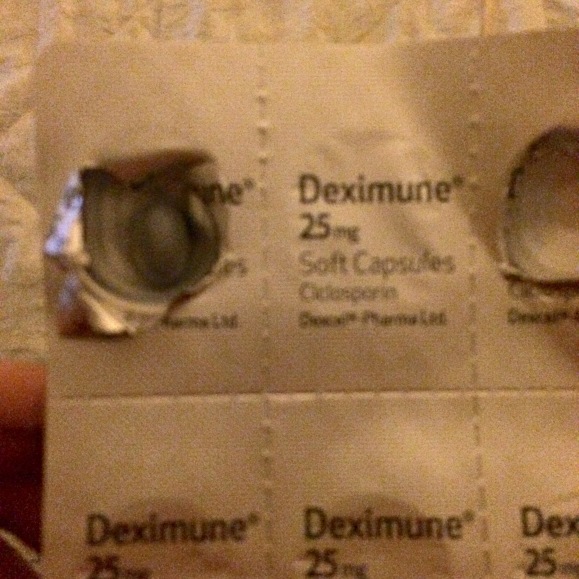 It was a milestone that was a long time coming and one which came with something I have been yearning for. It came with a deadline. At least, it came with something that is as close to a deadline as I can get. If I learnt anything last year, definite deadlines and timescales rarely exist in the weird and wonderful world of myeloma. So, when the Medically Trained Person said that if I was going to get Graft Versus Host Disease, it would happen within six weeks of me coming off the medication, I finally had a date in my diary. Additionally, as you do need to get all the relevant information, I was told that within the six week window, I would be most likely to show symptoms at the two week mark.

If the odds were ever in my favour, I had an unpredictable Christmas ahead of me. I had something that could almost be called a plan. I had my date. A date to look forward to and a date dread. At least, that is how I felt for the first fortnight.

Four words have been stuck in my head and followed my thoughts from the moment I knew I was going to have a donor transplant. Graft Versus Host Disease, known as GVHD to save my fingers. It might be the one medical term that is easy to pronounce, but the mechanics of it, the good and the evil of it, waiting for it, are anything but easy.

From the moment my sister’s cells entered my body, not a day has gone by where I have not replayed conversations in my head telling me that a transplant will be (much) more successful if one gets GVHD. That a lasting remission is most likely to occur if one gets GVHD. That one only wants minor GVHD and not severe GVHD. GVHD can be worse than the cancer the transplant was intended to treat. GVHD can kill you. My post transplant world has been categorised by these thoughts and unbearable waiting to see which one applies to me the most.

Another thing I have learnt in the most painstakingly slow way, is that the symptoms for GVHD are so broad that it has made it impossible for me to trust my body. Let’s face it, before my last transplant I already had reason enough to not trust my body. It has left no room for rational thinking. Everyday, multiple times a day, with each bowel movement, scratch, headache, bout of indigestion and shooting pain, I would wonder whether it had finally come. It did not. It was like failing my GCSEs on a daily basis.

I woke up and continue to wake up everyday and my body does not feel right, and I do not know the cause of it. One could say I ‘do not feel right’ because I am recovering from a transplant, but I want to know more. I need to be reassured and I cannot do it myself because my body does not feel my own. Maybe I should ask Big Sister. I am 98% her now after all…This constant questioning of the unknown something, is one awful, inescapable disease. Half hypochondria, part anxiety with a sprinkle of depression and that’s before we get to the diagnostics of the physical ailment. It is a weight far beyond my actual sizeable girth and one that has often been too much to bear. Telling myself that the last 150+ days have been about recovery and not failure has been my full time job. I could not talk or write about it through fear of jinxing my snail-like progress.

My long standing mental list of acceptable GVHD symptoms consists of oesophageal problems, diarrhoea and a rash. By December, despite developing a bottom sponsored by Andrex, the Medically Trained People told me that I had not developed anything from my list. As unpredictable and unformed as my stools had become, the fact I had not lost any weight, led the Medically Trained People to conclude it was not bad enough to warrant the GVHD label. During that conversation, the Medically Trained Person started to talk about the prospect of not getting GVHD. I left St Bart’s dejected. I felt unwell, just not the right sort of unwell.
If I thought that my days post transplant on Ciclosporin were difficult, the booming ticking clock that has been everyday post 15 December has been something all the more sinister. The first day free from the nightmare inducing horse pills, felt promising. My stomach was worse than usual and I could not stop scratching my neck. Both things soon subsided and realistically, were most likely a symptom of my nervous energy.

Over the next fortnight, I felt awful. Each 24 hours felt like double that. I was impatient. I repeated potential outcomes over and over and over again. I am embarrassed to admit that I occasionally gave in to the Bad Thoughts. The more I waited for something conclusive, for my pot to boil, the more I predicted failure. Worse than failure, a few times, I concluded that not getting GVHD which would shorten any remission, would be the easiest outcome for me. It would mean that I did not have to live with the unpredictability of waiting for a relapse and I would not have to deal with the uncertainty that awaits me when I attempt to rejoin my life. The bottom line was that at least that outcome would have a definite ending…
Then do you know what happened?

Two weeks to the day after I took my last pill, I got a mouth ulcer. By the end of that day, I had two, and then by the following day, my mouth felt like sandpaper. It still feels like sandpaper. I hoped, and a quick Google search made me hope that little bit more that the cause of my pus filled mouth was the elusive GVHD… One week after that, I opened my mouth to a Medically Trained Person and do you know what she said?

Read between the lines.

In that single moment I went on a metaphorical diet and I exhaled. I text members of my Support Network an update. I phoned Mamma Jones with the news, to which she responded nonchalantly, “I knew it”. Most tellingly, I left the hospital with my smile intact despite having to wait two and a half hours to rehydrate to allow for my bloods taken.

Despite allowing myself to bask in my relief for a day, I’m not buying any party poppers or downing champagne yet. The champagne would be wasted on my rotting mouth anyway. The six weeks are not up yet and although I am now on medication to treat my mild GVHD, my fears remain. No longer am I waiting to get GVHD, I am now hoping that it does not worsen. More hypochondria. My liver has not been functioning as well as it ought and although I was told not to ‘panic’ about my results, I challenge anybody in my position not to do just that. After all, I may have finally got what I wished for, but I still do not have a body I can trust.

As I said at the start of this, there is a very fine line between good and evil. I have two more incredibly slow weeks of trying to stay on the right side of it.

And then, what the hell is going to happen?

Patience is not my virtue.
EJB x