As we enter 2017, Nick and I always take the opportunity to look back on 2016 to think about what has gone well or not so well, what we are appreciative for, and also what we want 2017 to look like. So far this year, we haven’t had an opportunity to do this as New Year was really busy for us (more of that later), but I thought I’d reflect myself in this blog post….to be honest, I started writing this a week ago, but life has taken over as it does for everyone.

2016 was a massively busy year for us. Nick gave up one job, took a 3 month break and then started a new role back in pharmaceuticals. I started doing some paid charity work again too after a year focusing on family and house when we moved. Rebecca started her new secondary school and Sam sat tests to see where he would be going. We bought a house as an investment which we hope to sell early this year if life ever begins to go in our favour!

But there was also lots of excitement with 3 family weddings, my sister’s fundraising ball in aid of Myeloma UK, and our trip to Australia. Life has been pretty amazing really and with all of that, my health seems to have stayed fairly stable – something that I hadn’t been predicting at the beginning of 2016.

So our most recent thrills definitely came from our trip to Australia over Christmas, to celebrate the wedding of my niece Jo, to her (now) husband Ben. When I originally realised how serious her relationship was to Ben, and that she was unlikely to return to the UK, I knew that a visit for the wedding was a must one day. And when she skyped last New Years Day, to say that Ben had proposed, there was no way that we weren’t going to be at that wedding. I spent a lot of time babysitting Jo when she was a  baby, visited the family when they lived in Bangladesh, and spent many evenings drinking wine with her in our Wycombe house. She has been a big part of my life and being able to share her wedding day with her and Ben, was so important.

So, we took the kids out of school a week early, and flew out to Oz via Brisbane first. I can’t lie and say I enjoyed the flight, but luckily we spent the first two days with the ever so hospitable Nigel and Sue, who looked after us, fed us and weren’t offended when we fell asleep at the table (literally with the kids!). Once we had cuddled koalas and investigated crocodiles at the Lone Koala Sanctuary, we headed further South and went to Burleigh Heads for a couple of days. This is near to the Gold Coast where we were able to take the children on jet skis! 70km/h was me just starting out, but unfortunately, we had to slow it down a bit when Nick and I realised that perhaps the kids were a little nervous! Nick being Nick though, managed to speed up enough to take him and Rebecca off the back of theirs….thank god for kill cords. Needless to say, she was slightly less excited by the whole experience after this point. For me thought, it was an amazing adrenaline rush…something I always thrive on!

The following day, we headed down to Byron Bay…where luckily the kids brought our average age down to about that of everyone else around us! Strangely, it was whisky that brought us down here as Nick had met a lovely Australian called Eddie when he and his dad, did their tour of Islay during his 3 month work break. Eddie was setting up a new gin distillery just outside of Byron, called Cape Byron Distillery, and had said to Nick to visit if he was ever in Australia! Little did he know until he got an email from Nick asking if we could genuinely visit!

And wow, was it an experience. We started with a tasting of some of the botanicals that went into the gin such as finger limes (just to name the one I can remember), followed by perhaps the best G&T I have ever had! Eddie then talked us through his distilling process, the differences between his and others, and how he had been able to adapt it with his knowledge of whisky distilling (his experience previously). He then introduced us to Brookie, his father, and the namesake of the gin! Between them, they took us around the rainforest that they had replanted since 1983, and explained how deforestation had caused so many issues and how Brookie had spent his time trying to correct this. Even 10 year old Sam found the experience exciting!

Anyway, from Byron, we took our flight to Adelaide and started the main part of our trip. Jo and Ben’s wedding….and god it was an amazing day. It is hard to put into words how special it was – I’m not sure if that was due to the fact that it was warm, sunny, and the first outdoors wedding that we have ever been to. But it was the most beautiful day, in the most spectacular location. Jo looked stunning and Ben just smiled from ear to ear. Their vows to each other were so special and despite me saying in advance I never cry these days (I blame the antidepressants!), I blubbed and blubbed with happiness.

Rebecca was a flower girl, and although you can’t see her dress because she was too cold to let go of her wrap (it was a cool 22′!), she looked gorgeous too. Beer at the ceremony, one photo for guests, and generally a very relaxed Ozzie attitude all contributed to such a relaxed day. And of course, the superb food and great wine all added (not so much for those who named our bus back the ‘chunder’ bus – not me, I am relieved to say!)

So what else did we do in Adelaide, well there was of course the cricket on the beach, catch in the sea on Christmas Day with family and friends, and lots and lots of wine from the local vineyards. Jo, her mum, and I also had a slightly delayed post wedding hen do where we went round more vineyards tasting. Wine was a fairly common theme!

We also went swimming with dolphins which was a really special experience. It is one thing seeing them in a zoo etc, but knowing that you have wild ones swimming alongside you was something pretty special. Sam and Nick went to see the T20 cricket with Jo and Ben, and Nick did a pretty unusual whisky and food tasting experience. Oh…and I forgot to mention the joys of the Christmas Day BBQ with kangaroo steak, alpaca salad and the biggest and best prawns ever!

We all said goodbye on Boxing Day and went our separate ways and the Gascoyne family headed to Sydney where we were to stay until New Years Day.

Surprisingly, Sydney was my least favourite place, but that said, we still did some pretty amazing things while we were there. Probably the best thing that we did was on Nick’s birthday when we decided to do the Sydney Harbour Bridge Climb! I even got proposed to for a second time by Nick (a long story!).

We also did the usual visits to the Opera House, Bondi Beach, the coastal walk towards Coogee, Manly and the Botanical Gardens. 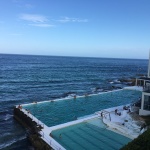 And of course, given that we were lucky enough to stay until New Year’s Day, we were able to watch the amazing Sydney Fireworks. We’d been given some advice on where to go by our bridge climb instructor, and my sister Chris, was kind enough to go and nab a spot from midday! We didn’t turn up till 5pm but she’d found an amazing space….woe betide anyone who tried to share it ;-). The kids were amazing given they were there for 7 hours and luckily Oz do a 9pm fireworks display before the midnight one…that definitely helped to entertain them. And, amazingly for those who know us, we did the whole thing sober as anything….Nick and I reckon it could be the only time we have ever both been sober for New Year!!!

So, anyway, wishing everyone a 2017 that delivers health and happiness.