Skip to content
Hello Lovely Friend,
They say that good things happen in threes and I guess it must be true because I have three things to share with you that I am absolutely over the moon about.
#1
I’m an Auntie!! (again)
I became an auntie to a beautiful, healthy baby boy when my sister delivered her baby last month. 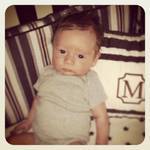 In addition to taking pleasure in Mason Thomas’ stunning good looks and charming personality, I am utterly thrilled that he will not be vaccinated.
Long ago, David and I made the decision to not vaccinate our daughters.  It wasn’t an easy decision.  I read as much literature as I could get my hands on about the pros and cons of vaccines, including information provided by the conventional pediatricians as well as the data that has been shared by the independent scientists who are opposed to vaccinations (You really have to dig in the weeds to find this information.  I have yet to meet a pediatrician who reads anything other than the conventional literature).  Twenty-one months ago, when I first met with Dr. Gonzalez, I would say I was about 90% confident that our decision to not vaccinate had been the right one but there was still a little doubt and fear in my mind.
When I questioned Dr. Gonzalez about vaccinations, I learned that childhood illnesses serve a purpose.  That’s right.  We actually want our children to get the chicken pox, the measles and the flu.  Dr. Gonzalez says “These infections serve a function in nature: they teach the immune system how to function efficiently. They help the immune system mature, as it was meant to, in a natural situation, so that as adults, we can fight infection more effectively.”
Do you remember how when we were growing up someone would get mono, “the kissing disease”, and be sick/tired for a few weeks?   Well, now Dr. Gonzalez is seeing patients who get mono and epstein barr  –  20 years later these patients have chronic fatigue and are still sick.  He believes this is the first generation of people suffering from over-vaccination.  These people have immature immune systems that can’t deal with a simple infection and are chronically ill decades later.  Although Dr. Gonzalez is mostly known for treating cancers, about 25% of his practice is composed of people who come to him for allergies, chronic fatigue, chronic lyme, etc.
The role of the immune system is to not only deal with infectious disease but also to deal with malignant disease, so, vaccinations are likely also contributing to the cancer epidemic as well.
#2
In the News
Last week, I was jumping up and down post coffee break after listening to an interview on  Dr. Mercola’s web site between Jeffrey Smith, author of Seeds of Deception, and Dr. Stephanie Seneff, a research scientist at MIT.  You see, I love living in New England but it can be challenging at times because I am surrounded by lovely people who think that anything that comes out of MIT or Harvard is *GOLD*.  Unfortunately, the studies that come out of these institutions are funded by corporate interests and are often fraudulent and biased.
So, imagine my elation when I hear Dr. Seneff link weed killer to virtually all chronic diseases including autism, allergies, cancers, crohns, infertility, multiple schlerosis, depression, etc.
Dr. Seneff says that glyphosate, found in weed killers and herbicides, causes nutritional deficiencies and toxins in your system through the gut bacteria.  She points out that we are spraying these products on our lawns and allowing our children and animals to roll around in them and track them into the house.
Dr. Seneff began researching autism 30 years ago when she saw the rates of austism skyrocketing.  She says that as of March 2013, one in 50 will be diagnosed with autism and if things continue at this rate, in 20 years, every other boy will be diagnosed on the autism spectrum!
Dr. Seneff points out that most of the research for autism is in genetics and that “research into environmental factors is practically nil” (gee, this sounds familiar).  Dr. Seneff says that the skyrocketing autism rates could only increase at this rate due to environmental factors.
I’m not sure if you are aware but autism is being reversed with nutritional protocols similar to Dr. Gonzalez’, so clearly, diet and toxicity are huge factors.
Here’s the interview if you want to check it out:
http://articles.mercola.com/sites/articles/archive/2013/06/09/monsanto-roundup-herbicide.aspx
#3
ME!
Last, but not least, I’m thrilled to share that I have had three months of consecutive improvements in both my blood work and hair samples.  Perhaps even more importantly, I’m starting to feel better…..more motivated, more optimistic, more energetic.
Ahhhhh…..feels good.