Okay, why would a Michigan Man, who has a block M tattooed on his heart, dare say Go Bucks the day before one of the greatest rivalry in sports takes place between Michigan and Ohio (State)?!? 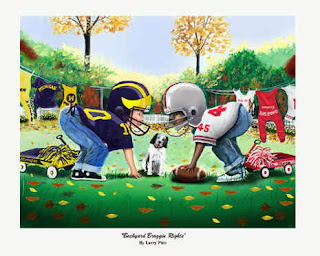 Well…any place that wants to dominate Myeloma as much as I do has a room reserved in my heart.

It all started last Friday during a trip to The James (Ohio State’s Medical Center) where I was meeting a couple of friends who shared the same passion to dominate Myeloma. They set up a meeting with Dr. Benson, Myeloma Specialist at Ohio State. They invited me, I accepted, and I soon found myself in enemy territory 8 days before the big game.

Dr. Benson offered to give my friend a tour of his facility, all his research and provide insight in how he intends to dominate Myeloma and find a cure.

With the last two blood tests showing a trace of Myeloma after almost two years of being cancer-free, I was willing to hear anyone out on their plans to kick Myeloma, even if it met traveling to Columbus.

The two hour time slot with Dr. Benson flowed over to three hours, and I must say, I left full of more hope than ever that the days of Myeloma are numbered, for me and the ~25,000 people in the US who are are diagnosed each year.

What I liked about Dr. Benson: 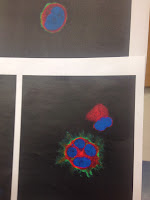 With all this new found excitement and support of The Ohio State’ Myeloma Research, don’t be confused, tomorrow I want the scarlet and gray to be dominated, just like Myeloma. The passion I have to beat Ohio on the football field is much similar to the passion to kick cancer, but I am grateful that the shared passion that fuels this college football rivalry can be used to work together to dominate Myeloma for everyone!
Just to bring some balance to this post so folks don’t think I am at all becoming a Buckeye, I want to give a major thanks to Jim Brandstatter and Coach Hoke for giving me the opportunity to continue to raise awareness for Multiple Myeloma this past Wednesday at Pizza House. Both schools are working to doMMinate this disease. 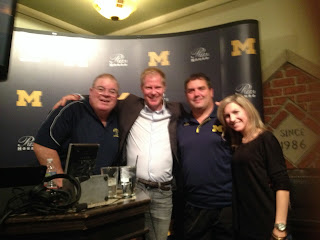 Remember, Hope is sometimes found where you least suspect to find it or the last place you would ever want to look. Keep Battling, keep the Faith and Go Blue!
Phil