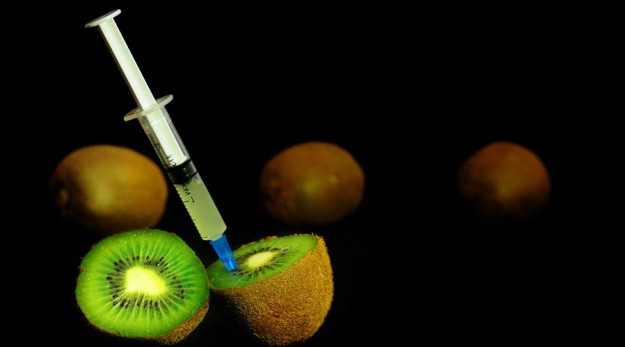 For years, scientists have been warning the public about the long-term health risks posed by genetically modified foods. In 2010, the American Academy of Environmental Medicine advised the public to avoid eating genetically modified foods, saying, “There is more than a casual association between GM foods and adverse health effects. There is causation.” Mounting research backs up this claim, including a recent groundbreaking long-term study with particularly gruesome findings.

Substantial research has been conducted on GM foods — and much of it has demonstrated adverse health effects. But until now, studies of GM foods have been observed effects in lab rats for only 90 days. In contrast, a first-of-its-kind experiment just published in Food & Chemical Toxicology examined results of GM foods in rats over a span of two full years.

For the study, Italian and French researchers at the University of Caen in the United Kingdom fed 200 rats a Monsanto corn variety, NK603, that was modified to make it resistant to glyphosate, an herbicide sold under the name “Roundup.” The results? The rodents developed several enormous tumors at an increased growth of 200 to 300 percent. They also suffered severe liver and kidney damage early in the experiment. Compared to the control group, most of the female and male rats died prematurely.

You should know that the GM corn eaten by those rats is the same Monsanto corn found in the chip you likely dip in the salsa bowl. And it’s the same corn likely to be found in your breakfast cereal, baked goods, processed foods and drinks, corn tortillas, and corn chips. After all, we are living in a corn nation. In 2011, approximately 91 million acres of corn were planted across North America.

Some people joke that GMO means “God Move Over.” But literally, “GMO” refers to a genetically modified organism or transgenic organism. Both of these terms apply simply to what happens when genes from one species are taken and inserted into another to obtain a desired trait not seen in nature. For instance, scientists have spliced arctic fish genes into tomatoes to give them a tolerance to frost. Monsanto, the largest biotech company in the world, is the No. 1 maker of GMOs. Just like the fishy tomatoes bred to withstand cold, all GMO seeds are modified to meet various economic goals (regardless of health effects). The main traits sought by modification are:

GMOs: Here, There, And Everywhere!

An estimated 70 percent of processed foods in the United States — from soda to soup, crackers to condiments — contain genetically engineered ingredients. That’s according to Sustainable Table, a subset of the nonprofit organization GRACE, created to help consumers understand the problems with our food supply. As far as specific crops go, 95 percent of sugar beets, 94 percent of soybeans, 90 percent of both cotton and canola, and 88 percent of corn in this country are genetically modified.

At the moment there are no proper labeling laws, so unless you eat organic, you have no way of avoiding Frankenfood. The United States is far behind the curve in protecting its citizens from the hazards of GMO foods. Europe has taken a much stronger stand on behalf its consumers: Only 5 percent of food sold in Europe contains GMOs, and European laws ensure that the public is educated. In fact, outside the United States, 50 other countries require labeling of GMOs.

“Unless we make the regulatory system more reliable, some engineered crops, which may be harmful (to our health), could find their way into our food in the future,” says Doug Gurian-Sherman, a senior scientist in the Food & Environment Program at the Union of Concerned Scientists. “The most important point with regards to GE (genetically engineered) food is that current regulations are weak and cannot ensure that possible-risky GE foods will be identified as such.”

Michael Taylor, the current deputy commissioner for foods at the United States Food and Drug Administration has worked for Monsanto in the past, both as an attorney and eventually their public policy vice president, making you wonder about the FDA’s revolving-door ethics.

A Sneak Attack With Harrowing Consequences

Starting in 1996, GMOs snuck into our food without a trace of government testing to determine their safety for human consumption. By 2005, the number of Americans with three or more chronic diseases nearly doubled — from 7 percent to 13 percent. Allergy-related visits to the emergency room also doubled between 1997 and 2002. In March 2001, the Centers for Disease Control and Prevention reported that compared to seven years earlier, Americans were suffering from twice the number of food-related illnesses. This spike in health problems caused by food occurred during the very same time period that GMOs were infiltrating our food supply.

“There are potential dangers that may occur from some engineered foods that many scientists have widely agreed are possible,” Gurian-Sherman says. “One of the biggest risks is putting genes from non-food organisms like bacteria, viruses, or fungi into our food that do not have any history of safety. Potential side effects from this, depending on the gene used, include an increase in allergies and increased food-toxicity.”

These risks coupled with the finds of the recent rat study provide us with food for thought about the state of our current agricultural landscape. As Dr. Suzanne Wuerthele, a toxicologist with the U.S. Environmental Protection Agency has told the press, “We are confronted with the most powerful technology the world has ever known, and it is being rapidly deployed with almost no thought whatsoever to its consequences.”

Meanwhile, Monsanto (makers of DDT and Agent Orange) is funding its own safety studies, with no further testing required by the FDA.

How To Avoid GMOs

Derivatives of soy, corn, canola, cotton, and sugar beets show up in most processed foods including bread, crackers, chips, chocolate, candy, cookies, cereal, jelly, frozen or canned foods, snack foods, sauces, soups, dressings, protein bars, sodas, juices, and even our vitamins and supplements. If you must eat processed foods, make sure that they are labeled organic.

Keep in mind that the five crops mentioned above are herbicide resistant because they’ve had bacterial genes inserted into them. As a result, U.S. farmers have sprayed an extra 383 million pounds of herbicides between 1996 and 2008 alone. Therefore these crops feature higher herbicide residue, which we then ingest.

In addition to the herbicide-resistance gene, cotton and corn are also genetically engineered to produce their own pest-killing toxins, making it thousands of times more concentrated. Needless to say, the adverse side effects of pesticides on human health are enormous.

Unless it is specifically listed as organic or non-GMO, avoid the following: soybeans/edamame, tofu, “fake” meats/alternative meat products, soy milk, soy cheeses/alternative dairy products, tempeh, and tamari. If you are buying anything processed or packaged and not labeled organic, check the ingredients and avoid if it has soy flour, soy protein (included in protein bars and many protein supplements), soy isolates, soy isoflavanes, soy lecithin, or vegetable proteins.

Unless specifically listed as organic or non-GMO, avoid the following: corn on the cob, corn in a can, corn chips, cornflakes and other cereals (read labels), and sweeteners such as fructose, dextrose, and glucose. For anything processed or packaged and not labeled organic, check the ingredients and avoid if it lists high-fructose corn syrup or corn syrup. An increasingly high number of products are being made with this crap. Also avoid cornstarch, corn meal, corn gluten, and modified food starch.

Keep in mind that GM corn is fed to cattle and dairy cows. If you eat beef, pork, poultry, or eggs, you are probably consuming secondhand GM corn. To avoid products from animals that have been fed GMOs, choose organic, wild-caught (fish or game), and foods from 100 percent start-to-finish grass-fed animals. Eggs labeled “free range” or “cage-free” do not necessarily mean GM free — make sure it also says organic.

Half of the sugar sold in the United States comes from sugar beets. If a non-organic product lists sugar as an ingredient (not pure cane sugar) then it is almost definitely a combination of sugar cane and GM sugar beets. Avoid anything not listed as 100 percent cane sugar on the packaging. Look for candy, cookies, chocolate, and other products made with 100 percent cane sugar, evaporated cane juice, or organic sugar.

Finally — and importantly — avoid aspartame (the artificial sweetener also known as NutraSweet or Equal). Not only is aspartame associated with myriad disturbing health problems, it’s derived from GM microorganisms, and the amino acid phenylalanine is manufactured with the aid of genetically modified E. coli bacteria. Also steer clear of soft drinks, processed beverages, and juices that are not 100 percent juice blends. These are most likely made with corn syrup and high-fructose corn syrup.