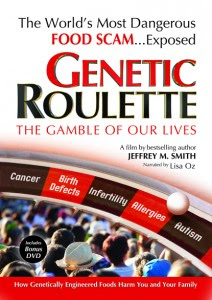 A film by Jeffrey M. Smith – Narrated by Lisa OzA production of the Institute for Responsible TechnologyAre you and your family on the wrong side of a bet?When the US government ignored repeated warnings by its own scientists and allowed untested genetically modified (GM) crops into our environment and food supply, it was a gamble of unprecedented proportions. The health of all living things and all future generations were put at risk by an infant technology.After two decades, physicians and scientists have uncovered a grave trend. The same serious health problems found in lab animals, livestock, and pets that have been fed GM foods are now on the rise in the US population. And when people and animals stop eating genetically modified organisms (GMOs), their health improves.This seminal documentary provides compelling evidence to help explain the deteriorating health of Americans, especially among children, and offers a recipe for protecting ourselves and our future.Follow This Link To Watch The Film —