Skip to content
The peddler now speaks to the countess who’s pretending to care for him, saying “Name me somebody that’s not a parasite and I’ll go out and say a prayer for him”
Visions of Johanna – Bob Dylan
It requires distance, sometimes, to see things in perspective.
I was on Bohol in the Philippines when I heard about the Rutland Earthquake – magnitude 3.2 no less *.
“I thought the house was falling down”, one local woman was quoted saying. Though others were less melodramatic. I particularly liked the use of column inches to tell us all that
“my electric toothbrush fell from the shelf into my sink”.
It made a stark contrast for me since Bohol is recovering from a magnitude 7.2 quake in October (which was just three weeks before the neighbouring island of Leyte was decimated by Typhoon Haiyan). The Bohol quake killed more than 200 people, injured 1,000 and destroyed 15,000 buildings. Damage is visible everywhere. Most of the roads are still being repaired and there are many areas where buildings are sealed off as unsafe. 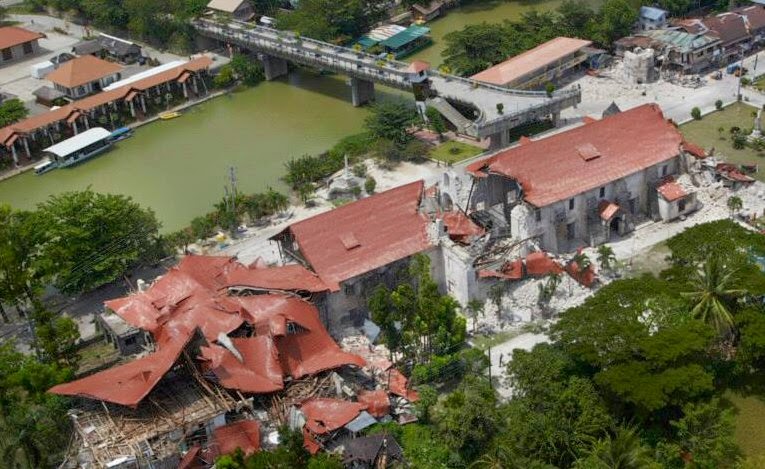 We had just visited the town of Loboc, where the 500 year old Spanish colonial church was largely distroyed. (A similar fate tragically befell many of Bohol’s historic churches.)

Rutland was, so transparently, a First World Problem #fwp.

In the Philippines, my myeloma too seemed largely an FWP – in contrast to the challenges faced by slum dwellers in Manila. Of course, if I were a slum dweller in Manila, my myeloma would be a very real problem for my family, as it would have killed me by now, and left them destitute. Still, blissfully ungrateful for my “good fortune” at being ill in the right place, I managed to avoid thinking about myeloma much. In a whole month, the mist of fatalism only descended on me once, briefly, and even then, the view from the boat I was travelling on blew it away almost instantly.

I must get away more often! Though I’m not sure of the ethics of a “travel to places where people have it harder than me”, policy.

* The Daily Mail said it was 3.2 “on the Richter Scale”, which has not been used for about 30 years. I think it had magnitude 3.2, which is something subtly different. But then accuracy, especially in science, is not a strength of the Mail. That paper, after all, did more than anyone to whip up alarm about MMR and measles, leading to lower vaccination rates, and ultimately to outbreaks of measles. I didn’t notice the Mail taking responsibility for that when they published a story about someone dying from measles last year. This may be an aside from DialM’s core purpose, except that myeloma is very much a subject of science and health. And (coincidentally) measles vaccine has recently been used to treat myeloma. OK, so it’s off topic, but I loathe the Mail and all it stands for. Especially so today, when some of its readers will no doubt be voting UKIP.