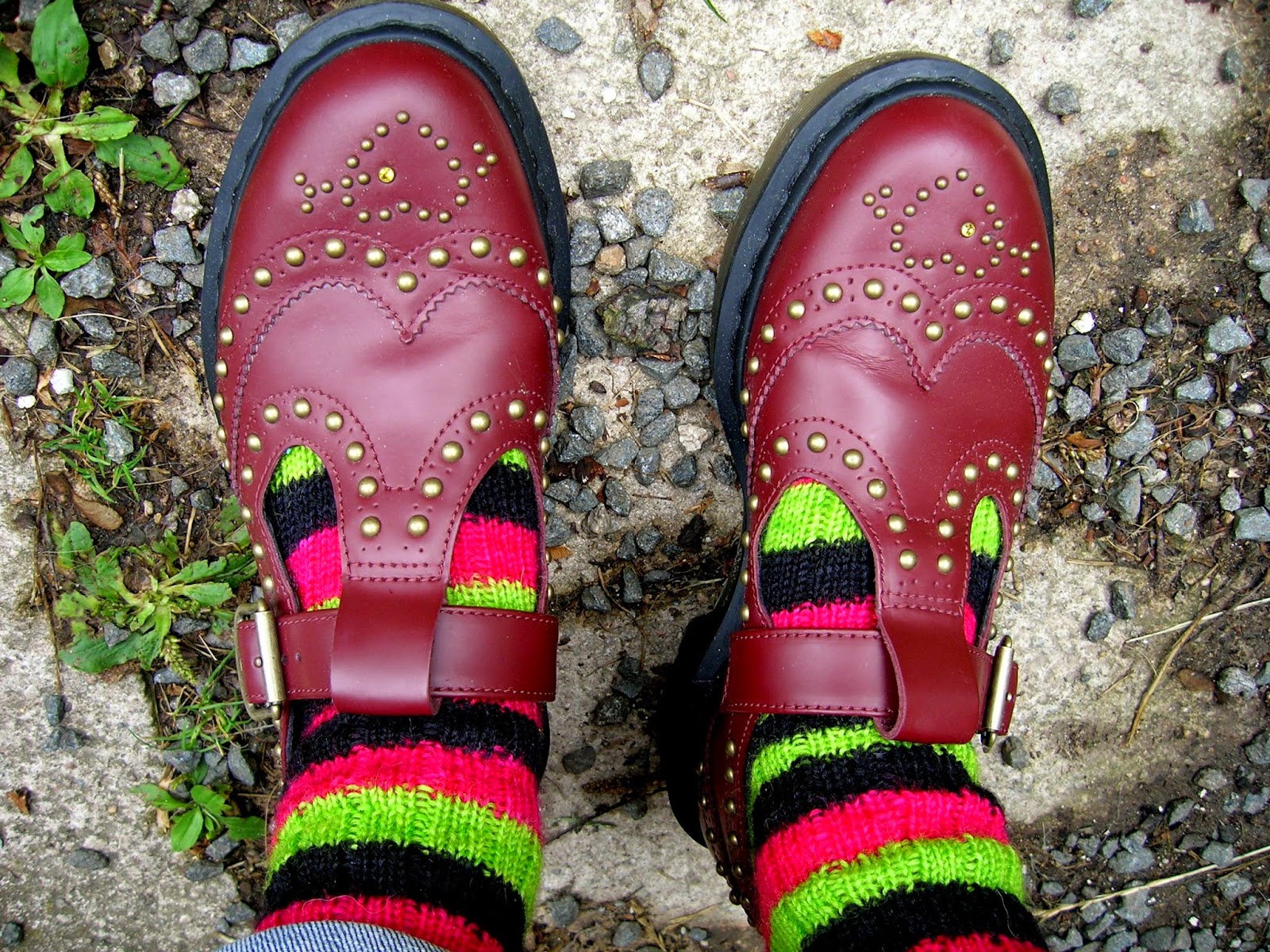 My Summer of Socks is storming on!
I finished another pair for me – this time in self-striping yarn from Twisted Limone, a UK-based purveyor of woolly self-striping gobstoppers.  If you want some of this yarn, you will have to stalk her Etsy shop between 3pm and 4pm (UK time) on a Saturday afternoon.  (I don’t know what’s going on today – her update is already live and it’s only 12.30pm!)
She only dyes 3 or 4 balls a week, and every one is unique, though she does custom orders if you spot something in her Sold archives that you can’t live without.  I have a habit of “checking” every Saturday… just in case there is a heart-stopping colourway on the shelf.  This was my first and only purchase to date:  the Poppy Field colour.  It is a 75% superwash wool / 25% nylon base and is slightly hairy. 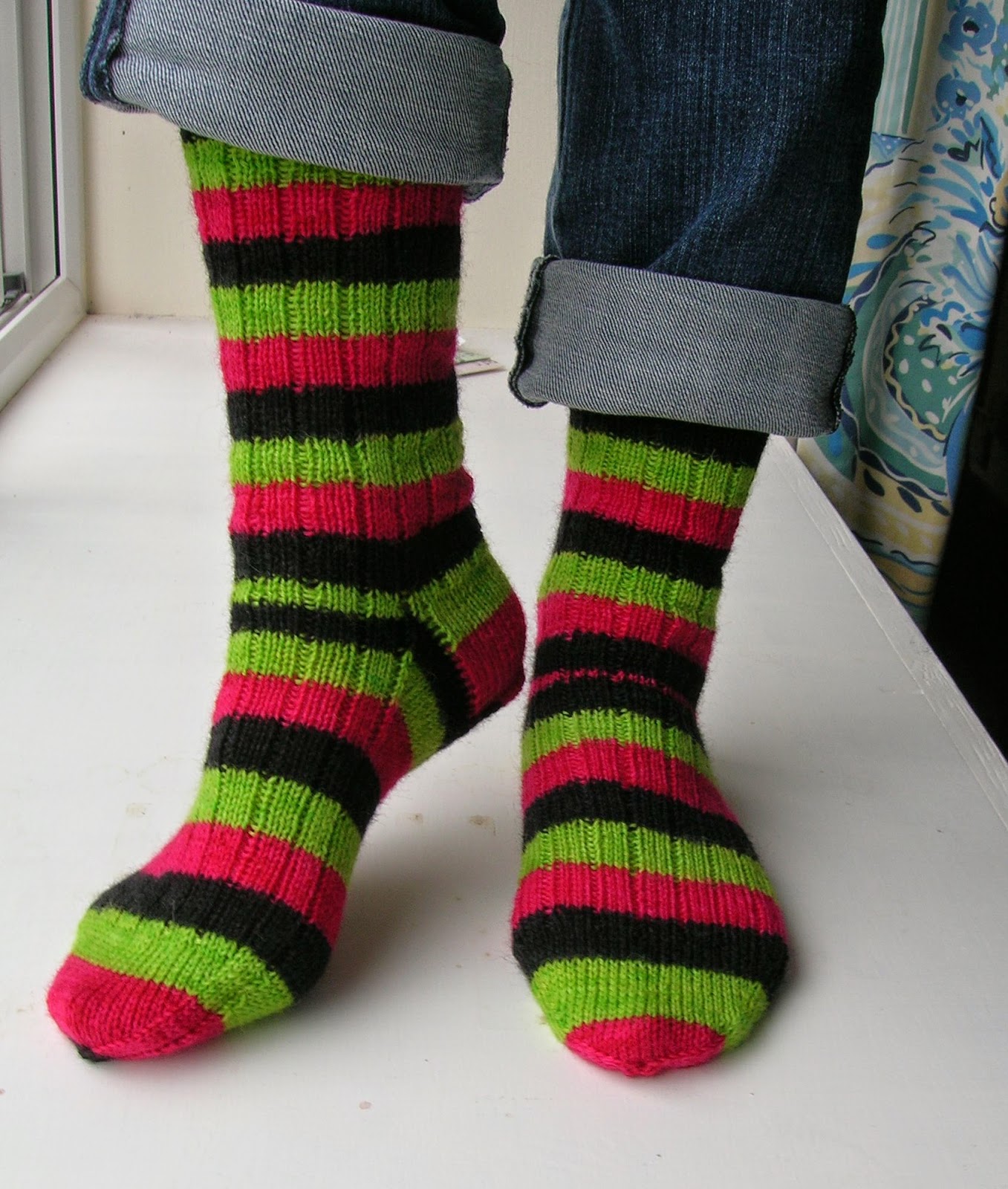 The stripes are pretty even and I took great care to start the second sock at the same part of the sequence as the first… but as you can see, I didn’t quite manage an identical pair.
Sock One has a pink mini-stripe on the front of the foot… 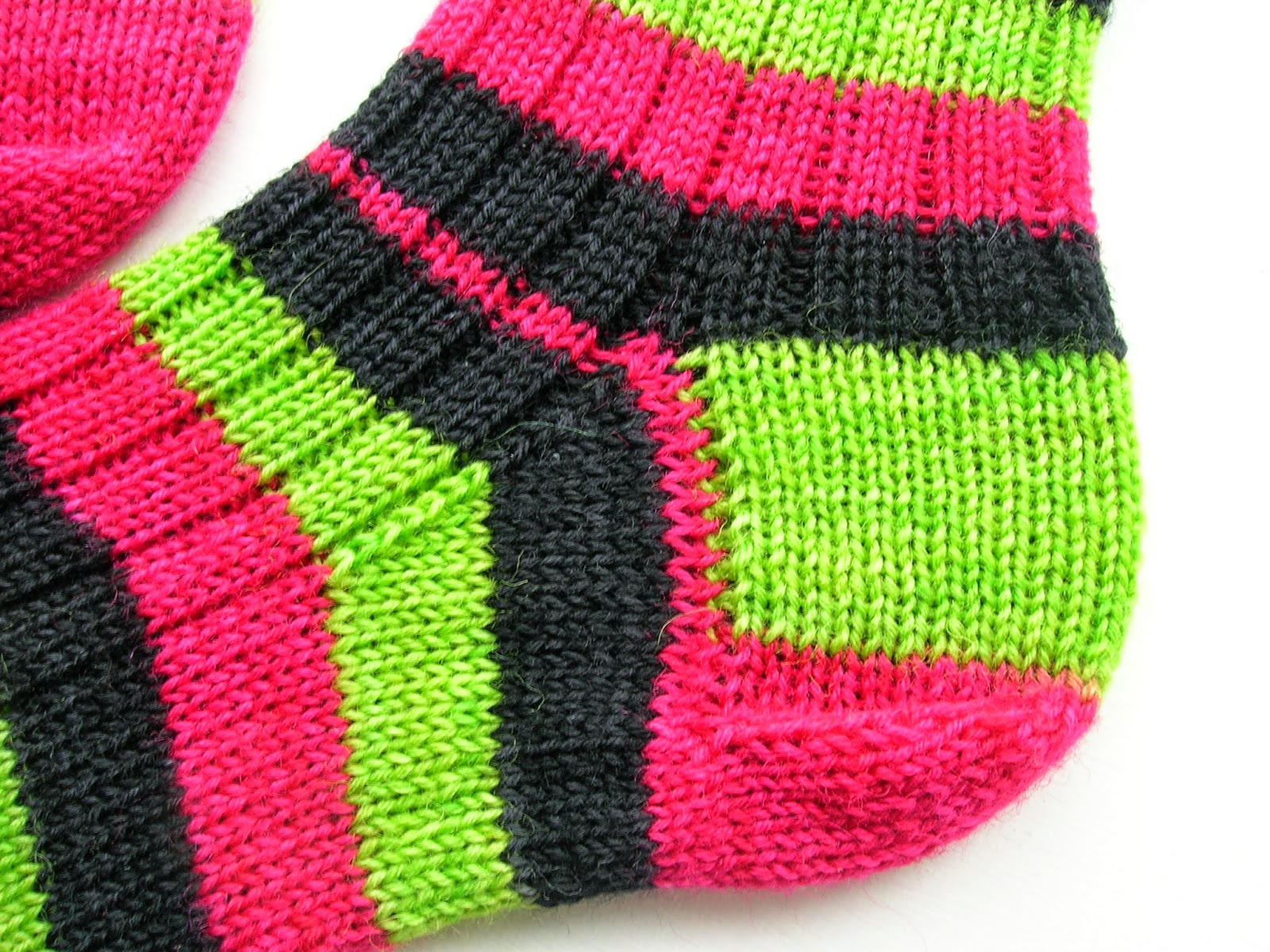 While Sock Two has a broader stripe of lime green… 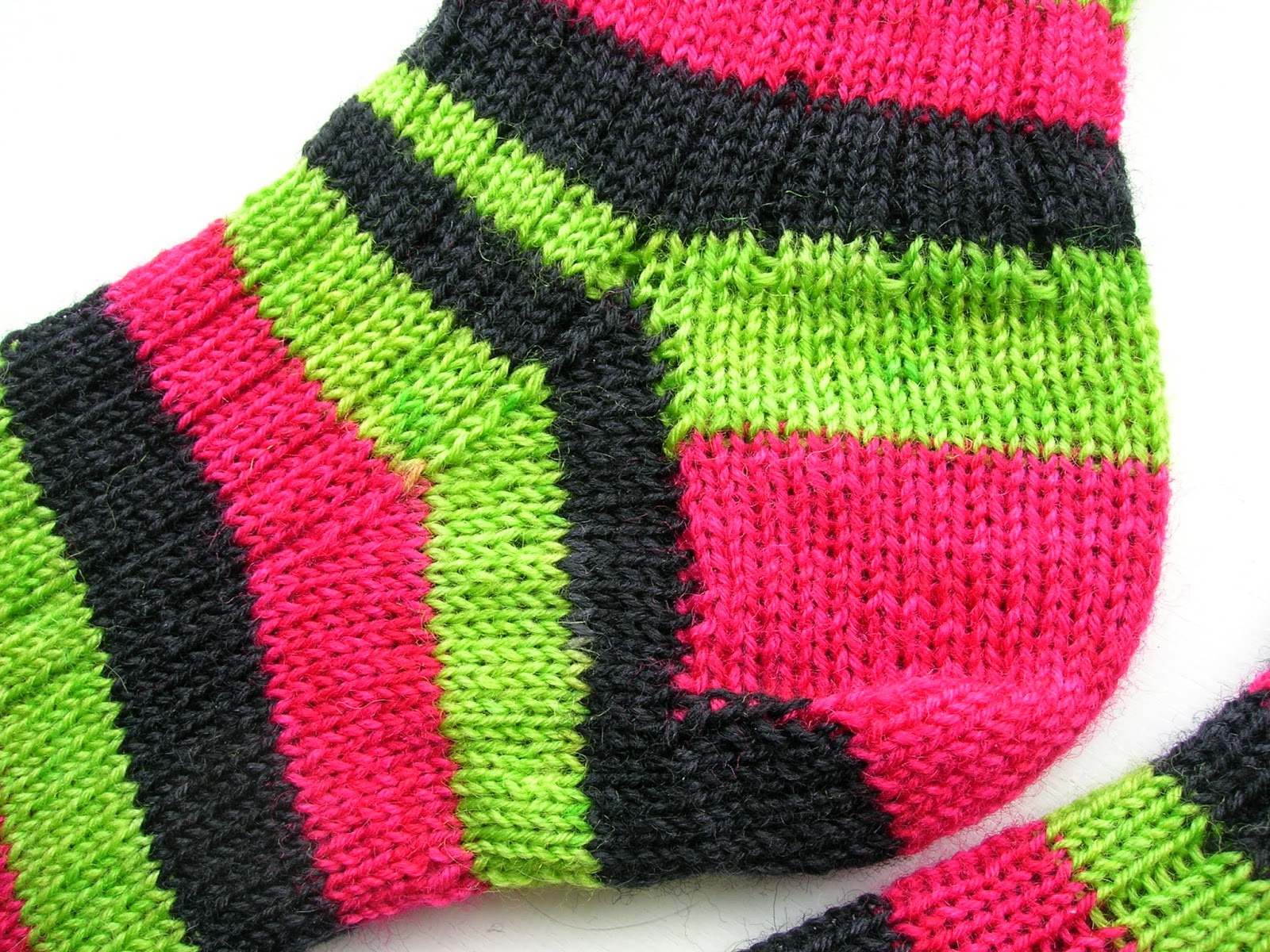 But if I really cared about stuff like that I would knit “after-thought heels” instead of using patterns with traditional heel-flaps.
I started the heel flap on Sock One at the end of a black stripe, while the second one (with the same number of rows in the leg) started on the third row of lime green. 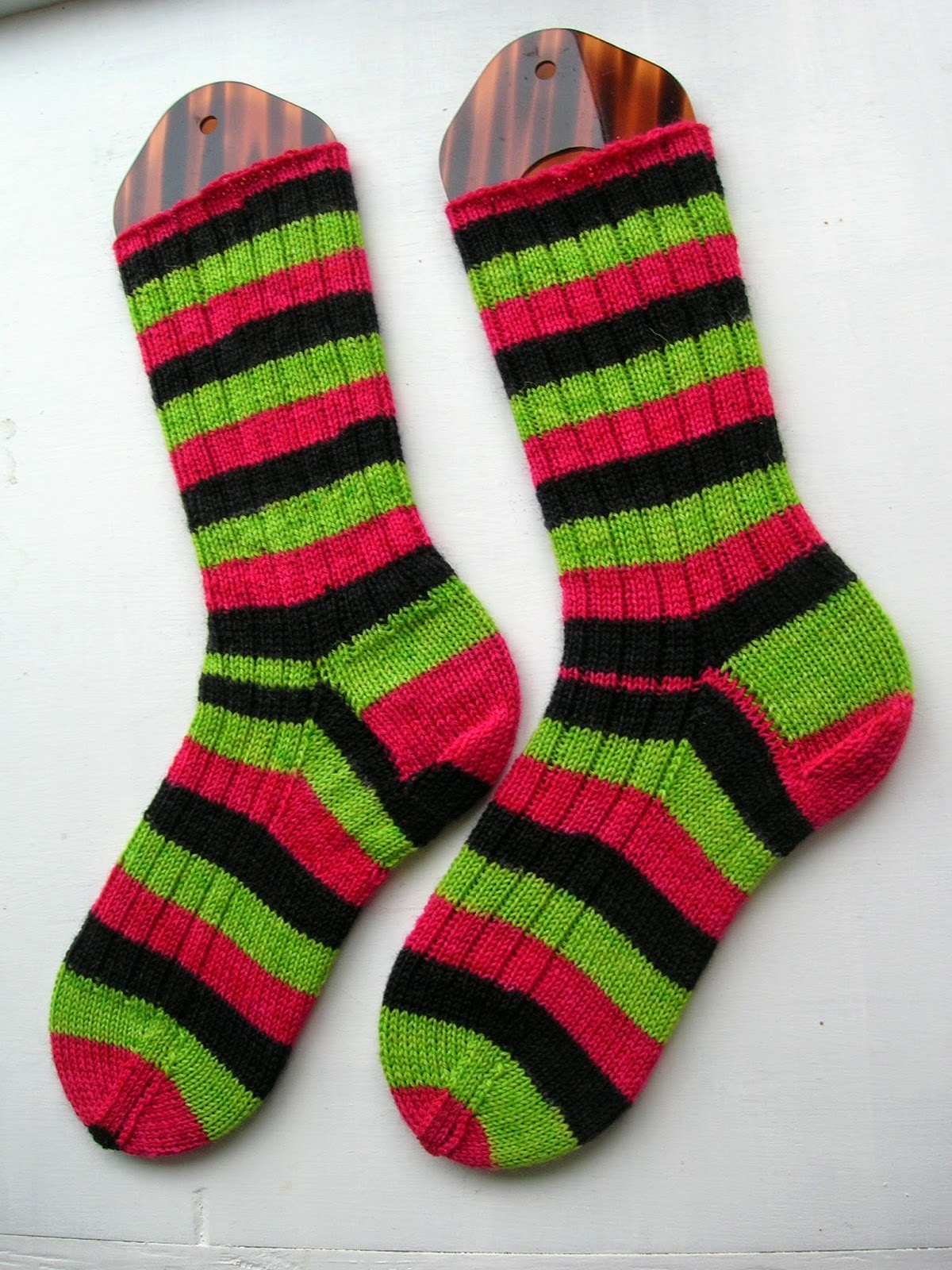 I used Kate Atherley’s (free) pattern:  “Wise Hilda’s Basic Ribbed Sock” over 60 stitches.
It has an unusually narrow heel-base, which sits underneath my foot rather than cupping the heel.  I am not sure if I like this or not:  I will wear this pair for a while before I decide whether or not to knit the pattern again.  I am very happy with the ribbing, which made them more fun to knit than a plain sock and shows off the stripes pretty well. 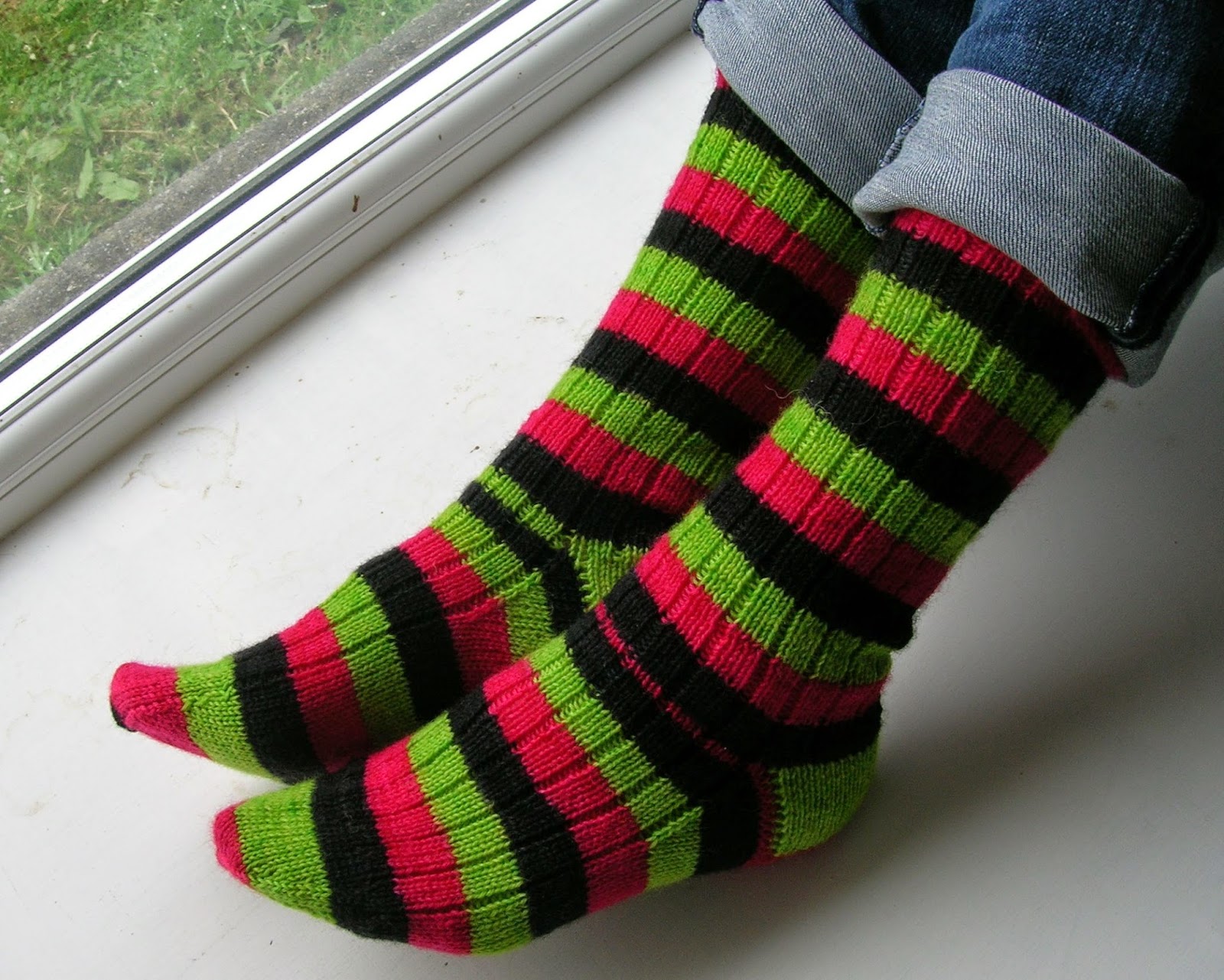 There is something almost Wicked-Witch-of-the-West about these socks!
I like them a lot!

P.S. Before you ask, those are indeed new shoes in the top picture.  Studded Doc Martens!  I found them on ebay.  The previous owner said she had only worn them once and they are in perfect condition.  I had hoped they would work with summer skirts but I need thick socks underneath to fit properly.  I am pleased to report I can drive in them and they are very comfortable – woo hoo!