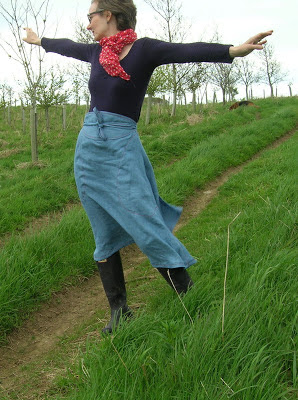 Because I have a blog, I can tell you that this project was conceived on 23 May 2011… so it’s taken me two years to make this skirt.  How did that happen?  I was besotted the moment I saw it, and then I lost my nerve. 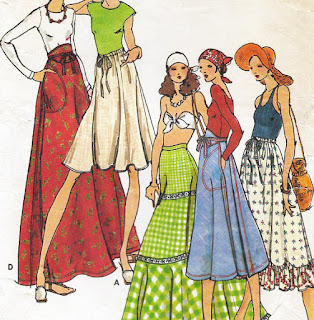 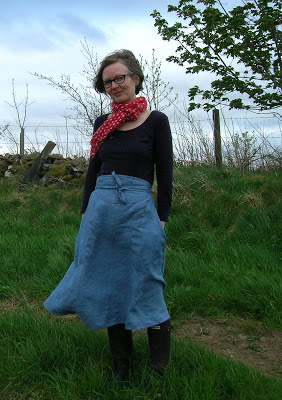 Process:
I had to piece together the waistband / ties to fit them into the available yardage, so lined up the joins at the side seams.  Otherwise, I did what I was told.
I have to commend the design of this pattern.  Everything fitted together beautifully, with especially clear instructions for fitting the waistband, which I had expected to be a bit tricky… but wasn’t.
The only thing I would do differently next time would be to bind the edges of the pockets on the inside, as there are some raw edges under there.  But that’s just perfectionism.
I had planned to bind the hem, but in the end I stuck to the instructions and turned it under twice, adding topstitching.  Lots of thread was used in the making of this skirt! 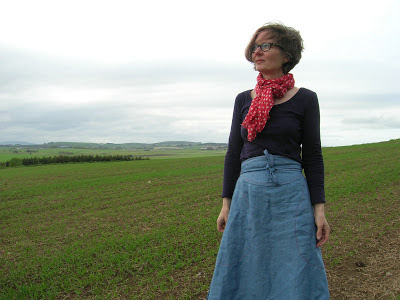 Verdict?
When I first tried it on, I was a bit disappointed.  The linen has a tendency to stretch out across the bias and is probably a bit too thin for a skirt.  It creases and ripples like crazy, and sculpts itself to the body, which is fine if you are standing up, but try sitting down and you will carry your bum-print around with you for the rest of the day!
However, when I went out in the wind to take these pictures, I found myself enjoying the swish and the swirl of it.  It is rather wild and untamed when it gets out in the weather.  Romantic?
And I am surprised and pleased to report zero knicker-flashing – woo hoo!  I was so worried that this would be a major issue with a wrap-back skirt.  And goodness knows it was tested! 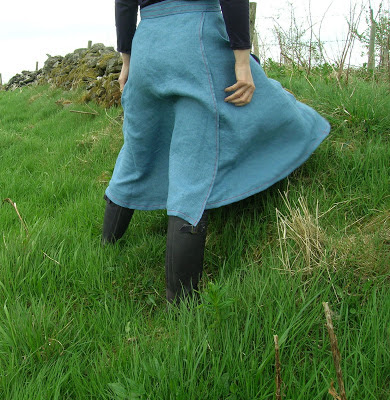 In a different fabric, this skirt has the potential to swoop gracefully.  I am seriously tempted to revisit the pattern one day.  A maxi version?  Ooh!
I like the style.  It has swagger and drape and those huge pockets are so practical and welcoming.
But it is definitely a farm skirt.
An egg-collecting, wildflower-picking dog-walking skirt. 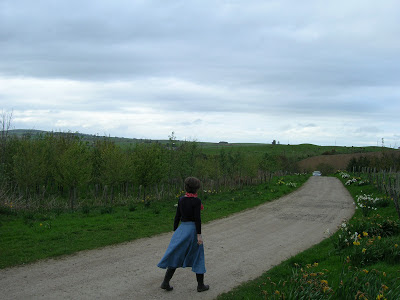