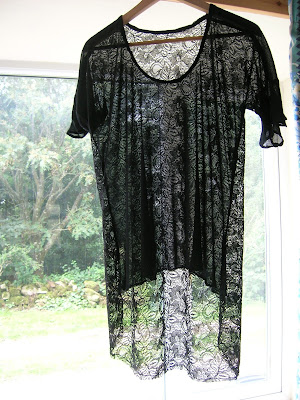 What do you do when you are 17 years old and have ten days to kill in the middle of nowhere?
Well, you could try to absorb “Crisis in the Middle East:  Israel and the Arab States 1945-2007”, with a bit of light relief from “The Man Who Mistook His Wife for a Hat”.  And you do. But when the local broadband is too slow for You-Tube to load properly, there comes a point of desperation.  A point when you think:  “OK, let’s try this sewing thing.” 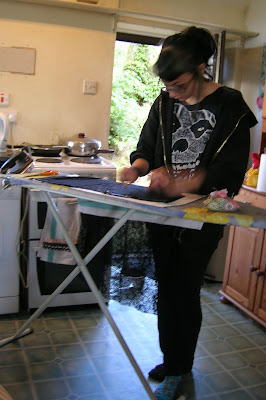 I asked The Girl to draw something she would like to make.
The picture came out looking remarkably like a Summer Concert Tee.
But it would be longer, have a lace back and a plain front, and a lower neckline. 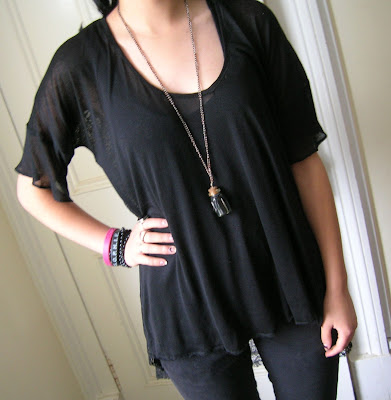 So I showed her how to trace the pattern, adding in her modifications.  The Girl’s version is 12cm longer, back and front, and the front neck curve is 3cm lower than the original.
When you are this new to sewing, it doesn’t occur to you to think that might be a difficult thing to do – you just get on with it.
Because I wanted her to make something she would actually wear, I didn’t restrict her fabric choice to “beginner” level.  So she opted for a beautiful corded lace for the back, and the same extra-fine jersey I used for her Drafting Cardi and my Summer Funeral Hoodie.
Yes, clearly I am insane. 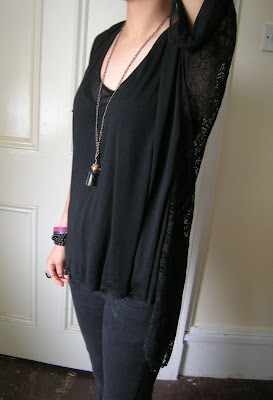 I showed her how to use the vari-overlock stitch on my Bernina, and she practiced with scraps of fabric, until she felt she had control of the machine.
I showed her how to stabilise the shoulder seams with satin bias tape and she practiced that for a while before launching into the real thing.
Yes, there was some frustration and slippage and restitching, but she was remarkably patient for a newbie.
We stopped for the day after that. 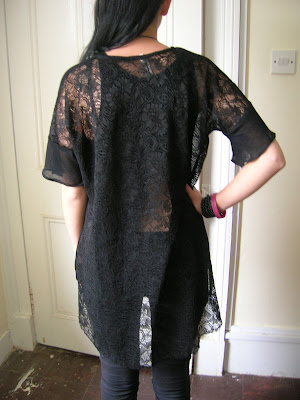 She approached the side and sleeve seams with a lot more confidence.
She was stitching far faster than I ever do!
And there was far less unpicking to be done.
Knowing how I had struggled with folded hems on that fine jersey, I offered to hem the sleeves and attach the neckband.  Of course, I managed to cut a hole in the main fabric while trimming the neckband, and had to fold it over a second time to cover the wound – aaargh!  Yes, mother almost ruined the whole project!
The Girl opted to finish the bottom edges with a single row of stitching, just to stop it from unravelling.  Good plan! 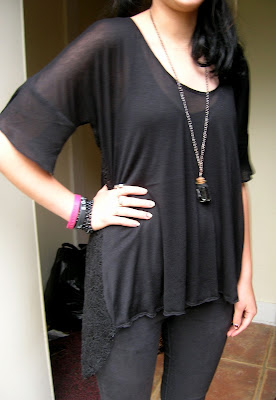 Stats:
Pattern:  Summer Concert Tee by Dixie DIY, size small, made 12cm longer just below the armholes, and with a 3cm-lower front neckline.
Fabric:  I ordered a metre each of extra-fine jersey and corded lace from Truro Fabrics.  She needed about half of each, so I foresee another sewing project next time she visits :)  Total cost?  About £11.

Verdict?
The Girl says: “I really enjoyed creating this top of which I’d seen similar styles on various online shops but couldn’t justify spending a tenner or more on what seemed relatively simple to make (ha!). But now I have my own, mainly handmade by myself, with lots of help along the way! I plan on layering up this top as it’s very see through without wearing something underneath and I’m currently searching ebay for some kind of bandeau to wear underneath if I’m feeling brave. In an ideal world I’d wear this top with a pair of faux leather interesting leggings of some kind such as these  and a pair of Demonia Swing 220’s. Neither of which I currently own but I’m working on it, especially the boots (which I’m nearly all saved up for) and now I have the perfect top to go with them!