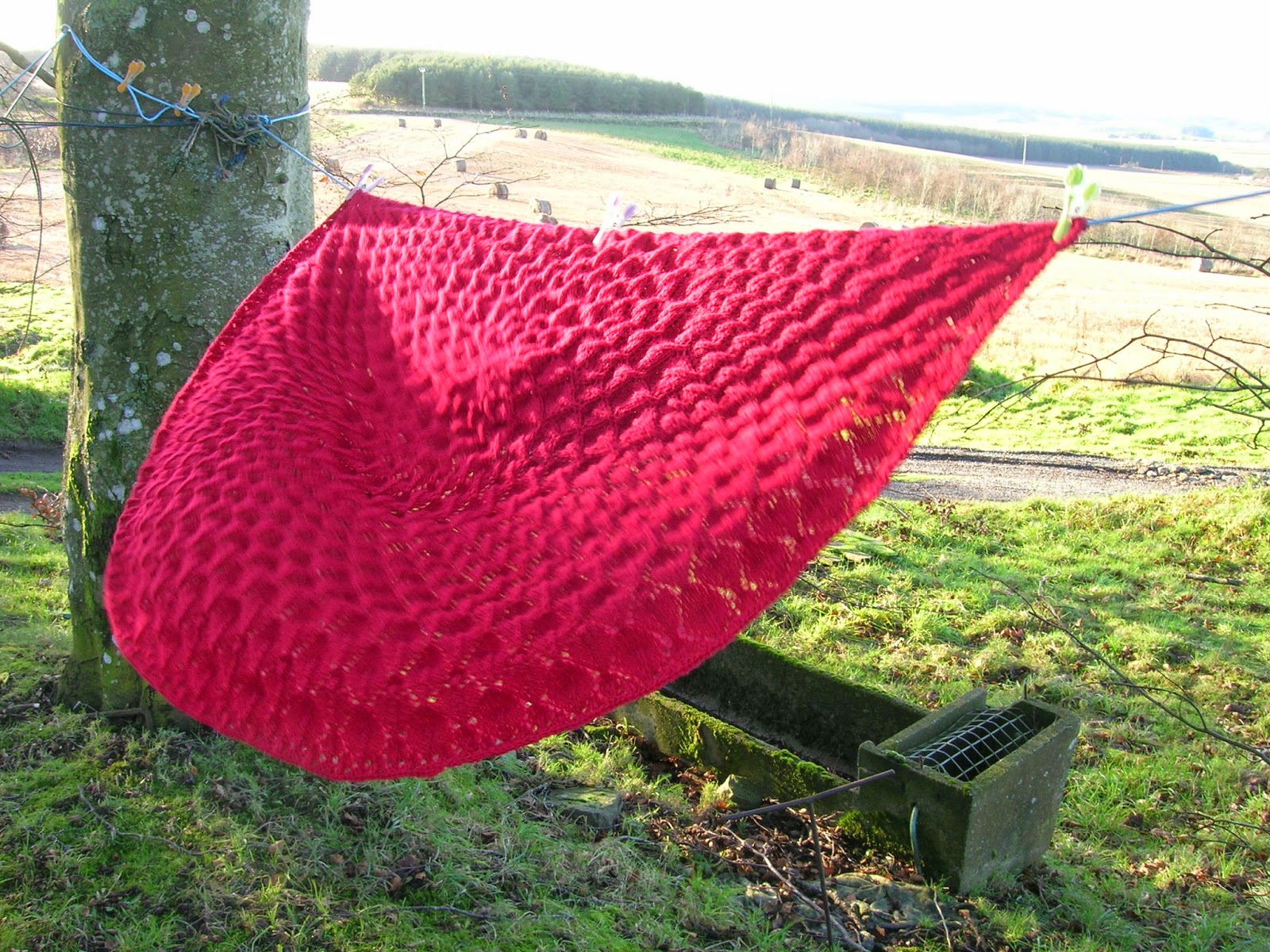 2014 will forever be known as The Year of the Blanket.
First there was the Mysterious Crochet Blanket.
Then there was the Big Red Doily.
I won the pattern in a giveaway on Heather’s Knitting Go Podcast.
This is the Old World Shawl or Blanket by Abigail Phelps, from her Hiraed Casgliad collection.
I was very excited but rather overwhelmed by the prospect of knitting a laceweight gradient-dyed shawl in this pattern. It would be beautiful, but I didn’t think I would actually wear it.  What a waste of all that work!

During one of several online quests to top up cotton supplies for my Mysterious Crochet number, I noticed that the shop also sold Cascade Eco Plus – ooh!  I fell for this glorious rich cherry red (Scarlet) and scooped up a couple of skeins, which I thought would be enough for a small blanket, or possibly a cardigan… either way it meant I could have free postage on my cotton order!
I can’t quite remember what tipped me over into the decision to knit the Old World blanket.
Partway through, I realised I needed a lot more than two skeins, and bought another three.
In the end it took three full 250g skeins plus 110g of the fourth (860g total).
(So I still have 390g left in the stash to play with – woo hoo!)

I used a 200m (edit: I meant 200cm obviously!) cable on my Knitpro Spectra interchangeables.  This was a good choice of needle:  it did not come undone, not even once, despite a lot of heavy stitch-shuffling.  I would not have welcomed a detached cable on that many stitches!
It is a really straightforward pattern, in the sense that the leafy lace flows steadily across the diameter in a logical way.  However, I went wrong at the top of the second chart on page 4 of the pattern.  Noticing that the final ten rows were labelled with two set of numbers, I assumed this meant you worked them twice.  Wrong! 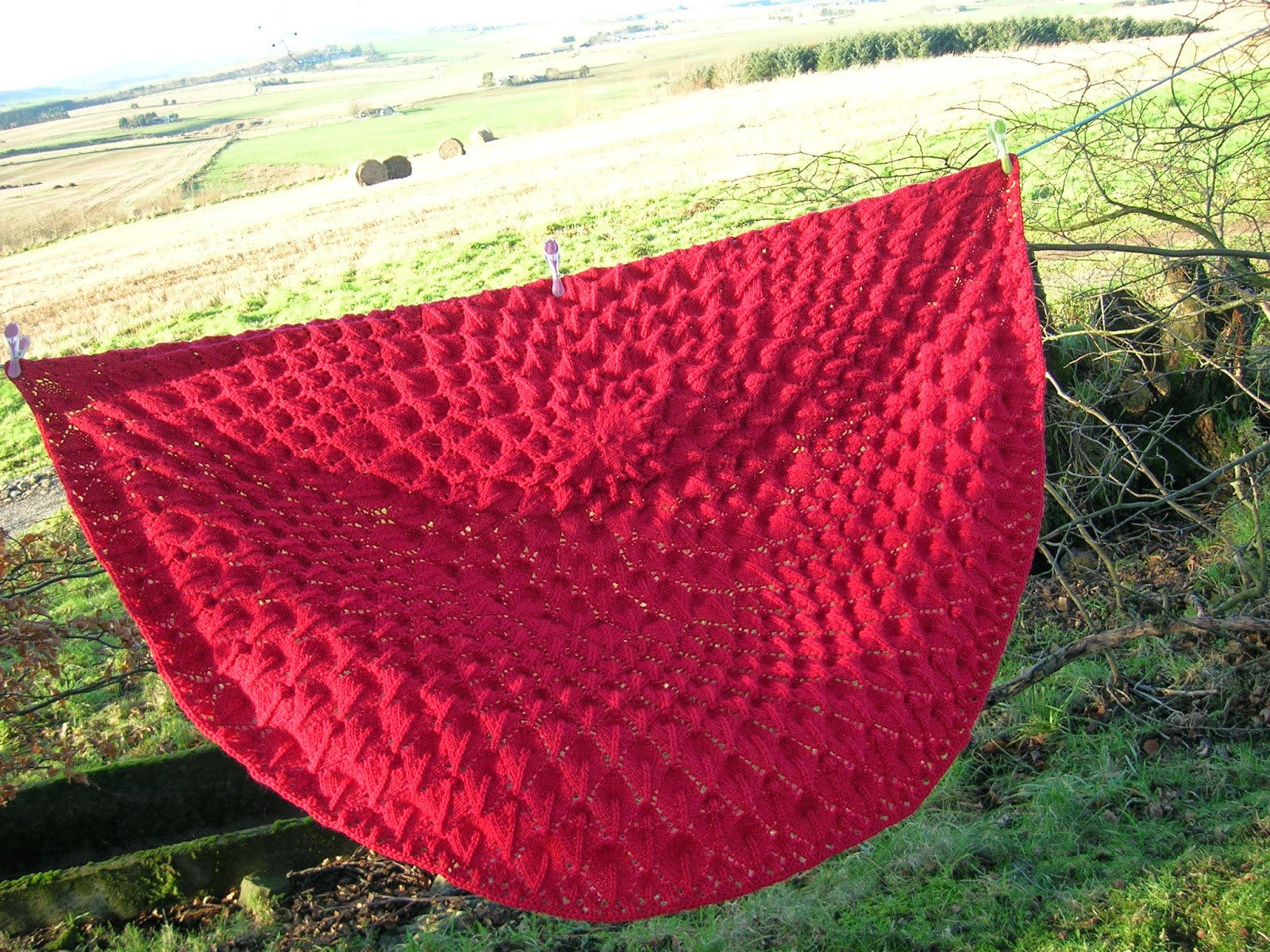 It was only when I was contemplating my border chart choice (garter or lace) that I realised that neither progressed naturally from my row 183… and that there was another unlabelled chart at the top of page 5.
Ugh.
As each row was taking me about an hour to work by this stage, the prospect of unravelling ten rows did not appeal.
I PM’ed the designer on Ravelry and she confirmed my fears.  She suggested working the additional unlabelled chart before the border (another ten rows), or else realigning my lace by moving the stitch marker.  I thought I would go for option two.
However, it wasn’t right.  It just didn’t sync up properly.

So instead I threw caution to the wind and came up with my own variation of the garter border.
And it worked!
Phew!

So here we have it:  the Big Red Doily.  Even unblocked. it is plenty big enough for a single bed or snuggling on the sofa.  It should save its recipient a small fortune in heating bills this winter!  And will be so much more practical than a hand-knitted jumper, which would require more frequent and careful washing.
Now, where’s that Kex blanket I was knitting…?