It is absolutely laughable that I expected to do some sewing this weekend.

We had some capital W Weather and both gable walls are trickling water down the inside to the pre-prepared dams of newspaper.  But at least it hasn’t spread across the floor … yet.

My weekend food shop turned into a magical mystery tour of the Shire as the roads were flooded in every direction.  I was very glad to get home safely.

But I did settle down with my knitting and finished off Pike’s Mitts for The Boy.

The left-hand mitt has a strong vertical line through the left hand cable.

Its mirror-image on the right hand mitt has a cable twist on top of this vertical line.

What can I say?  Only Allah is perfect?

Stats:
Pattern:  Pike’s Mitts by Jared Flood, found in Knit Now magazine (extracted from a book called Knit Local.)
Yarn: One skein of Brooklyn Tweed Shelter, bought from Loop London.  As you can see from the tiny leftover ball, I used almost exactly one skein.

Process:
A very enjoyable knit.  Once I got my head round the cables (including juggling two cable needles at the same time as 4 dpns – eek!) I was able to knit and watch tv at the same time.  These mitts are dedicated to Masterchef :)

I like the yarn.  It is soft yet sheepy and comes in a lovely palette of colours.  If it wasn’t so pricey I would consider making a whole garment out of it.  Yes, there were a few twiglets in the spin, but most of my knitting ends up with wood-splinters in it (see top photo) so not a problem in this… err… rustic environment! 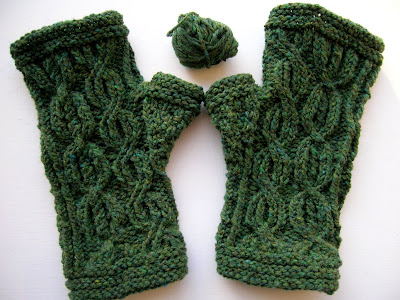 Verdict:
Very manly mitts for The Boy for Christmas.
I saw a comment on Ravelry that one knitter thought they were too big, but I was expecting them to be man-sized from the pictures of the designer’s own pair, which I shamelessly copied, right down to the colour.  Mine differ only in the mistakes!

Would I knit them again?  Yes!  And I might even get the cables right next time!