Hello again!  Another weekend, another sewing project :)
In the midst of my wardrobe re-evaluation, I said farewell to a number of disintegrating t-shirts.
And no, they weren’t cheap and nasty poundshop jobs, they were me-made Renfrews.
Just because I sewed them doesn’t mean they were guaranteed to last forever.
I was particularly grumpy about the organic cotton Renfrew that had shrank and faded… but I suppose it was two years old, so maybe that is the life of a t-shirt.  Sigh.
Moving on… 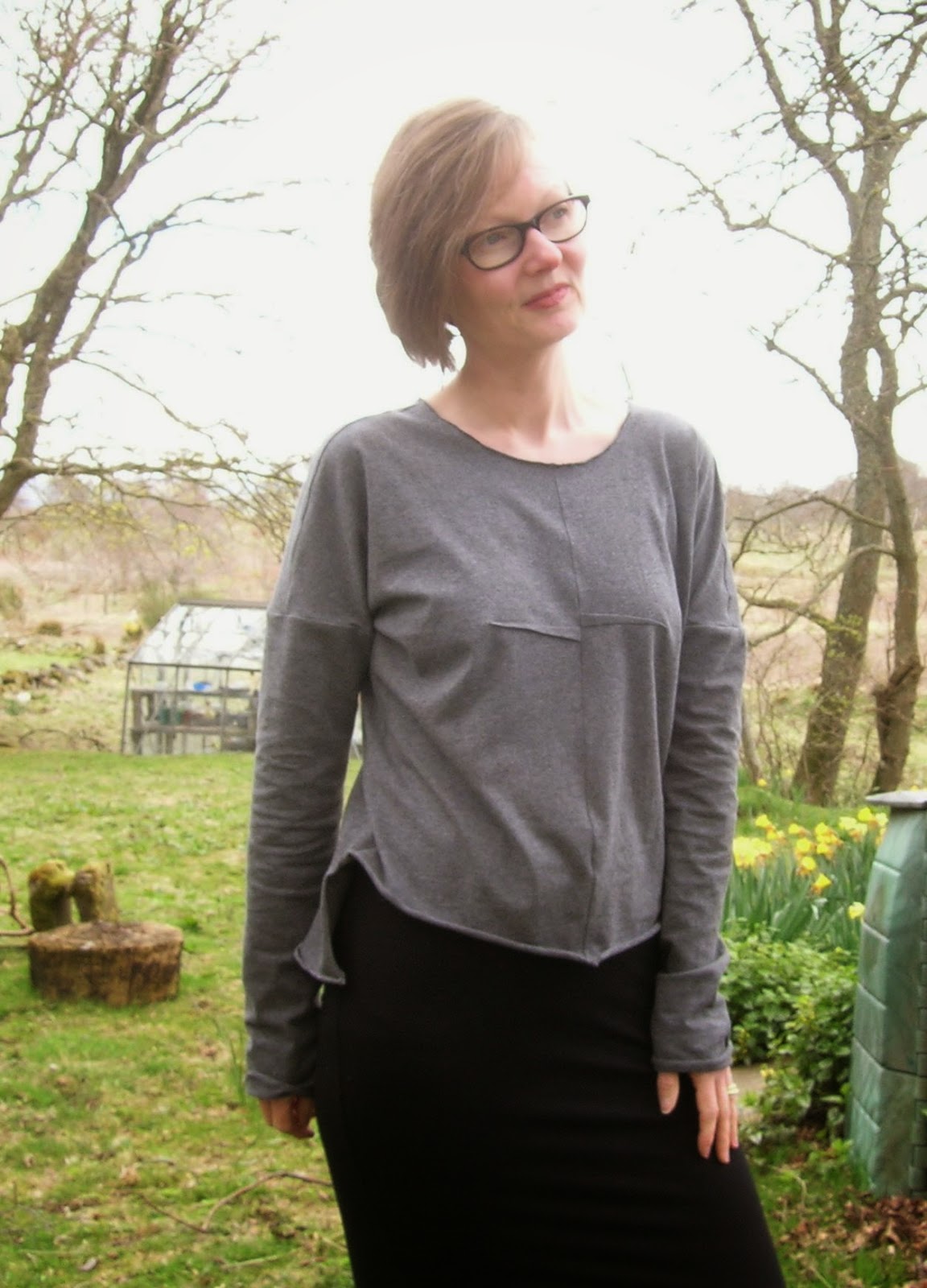 This is the Oki-Style Solo Top, with added Renfrew sleeves… extra long sleeves, because I like to wear them scrunched up at the wrist.
I also added a stepped hem for extra edge :)
The pattern is intended for woven fabric, so I didn’t add seam allowances, except at the centre front.
I figured this would allow the stretchy fabric to do its thing.
And it did. 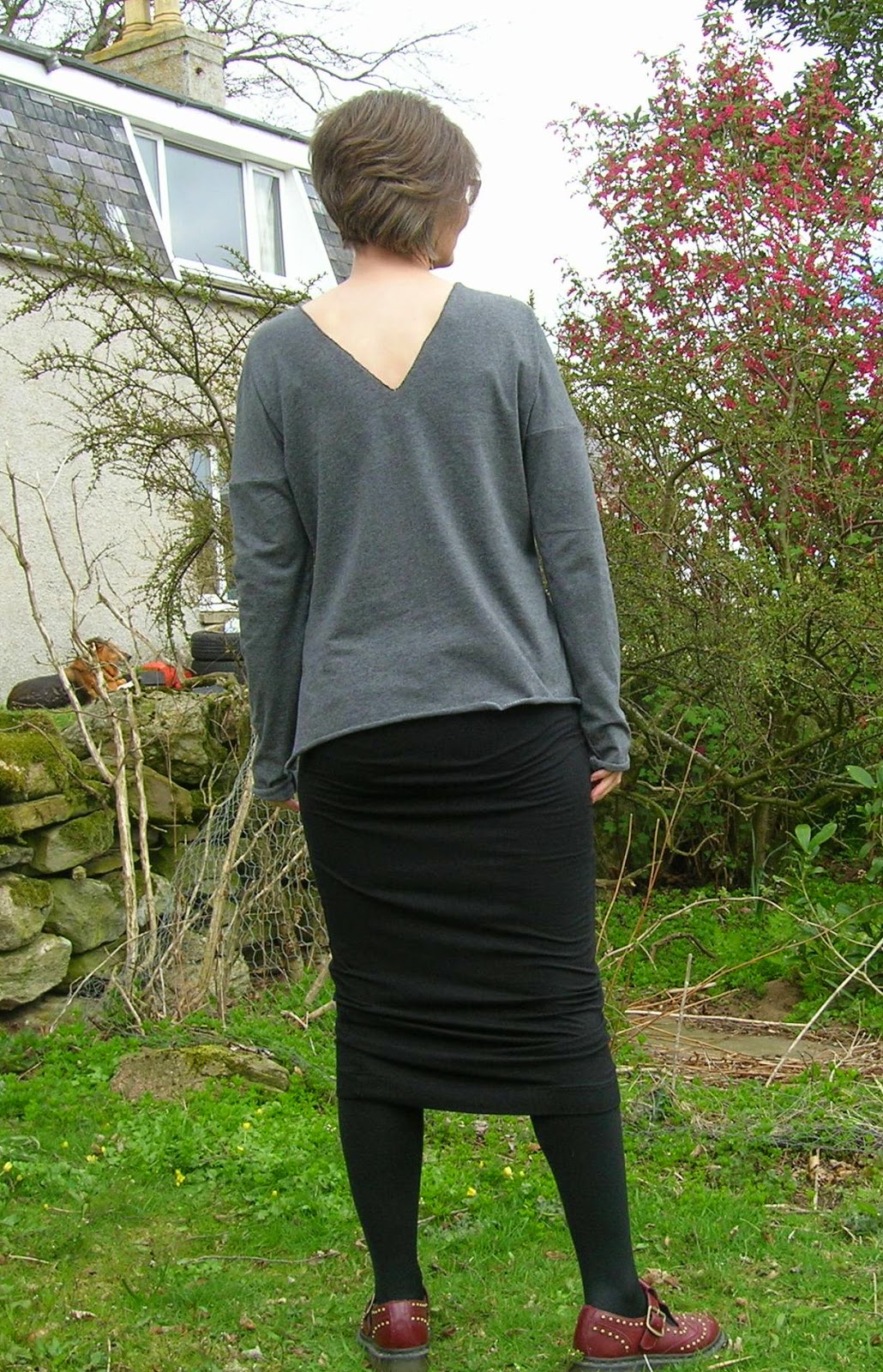 I am slightly besotted with the back-neck V.
Ah, who remembers the 1980’s and those lovely inside-out, back-to-front sweatshirts?
This definitely has that drama student vibe.
But you won’t catch me with a leotard underneath this time around! 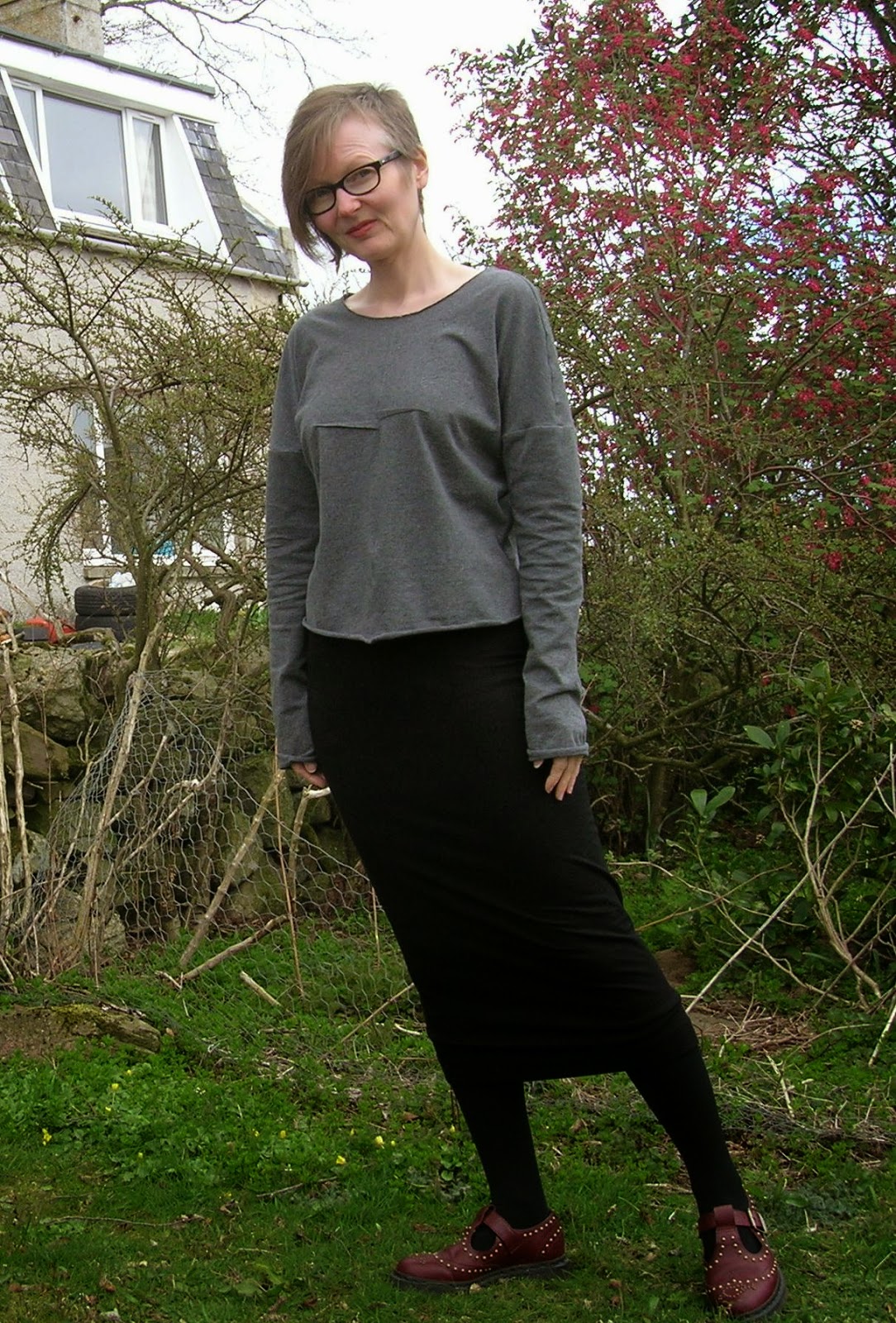 I left the edges to roll, rather than trying to hem the jersey or face that v-neck.
It was the facing that messed up my unwearable muslin of this design.
I stitched the whole thing on my Bernina 1008, using the “vari-overlock” stitch.  I used the same stitch to finish the hems and neck edge.
I see I have a pointy bit at the centre front hem.  An unexpected element that I rather like! 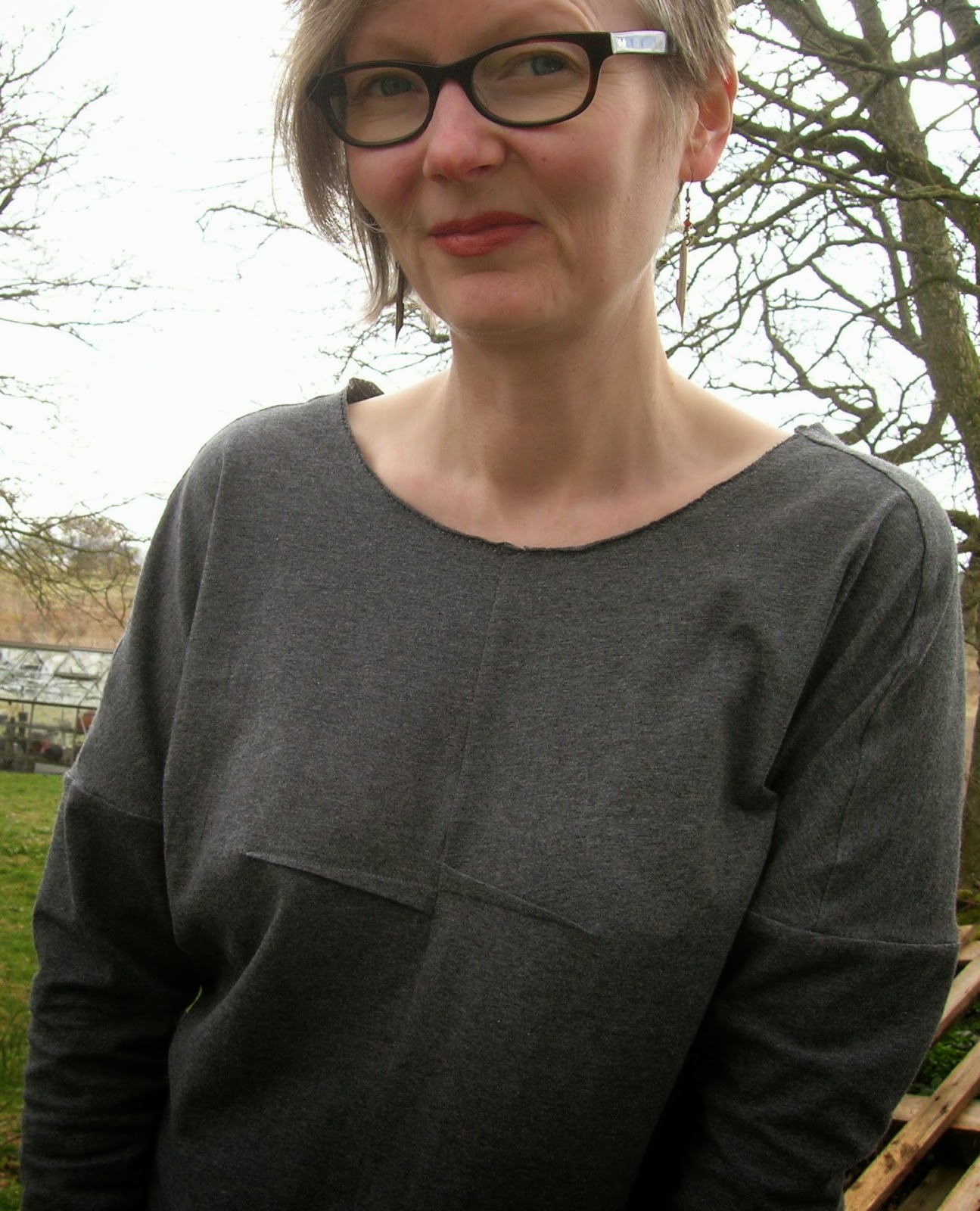 This pattern’s USP is the unusual inside-out dart feature.  These add shaping but possibly draw more attention to one’s boobage than I would like.
Whatever.

Stats:
Pattern:  Oki-Style Solo Top in size small, with added sleeves from the Renfrew (with the shoulder caps removed).
Fabric:  1.3 metres of Robert Kaufman Laguna jersey, from The Eternal Maker (link to a lighter colour of the same fabric)
Other:  Just thread.  Lots of thread! 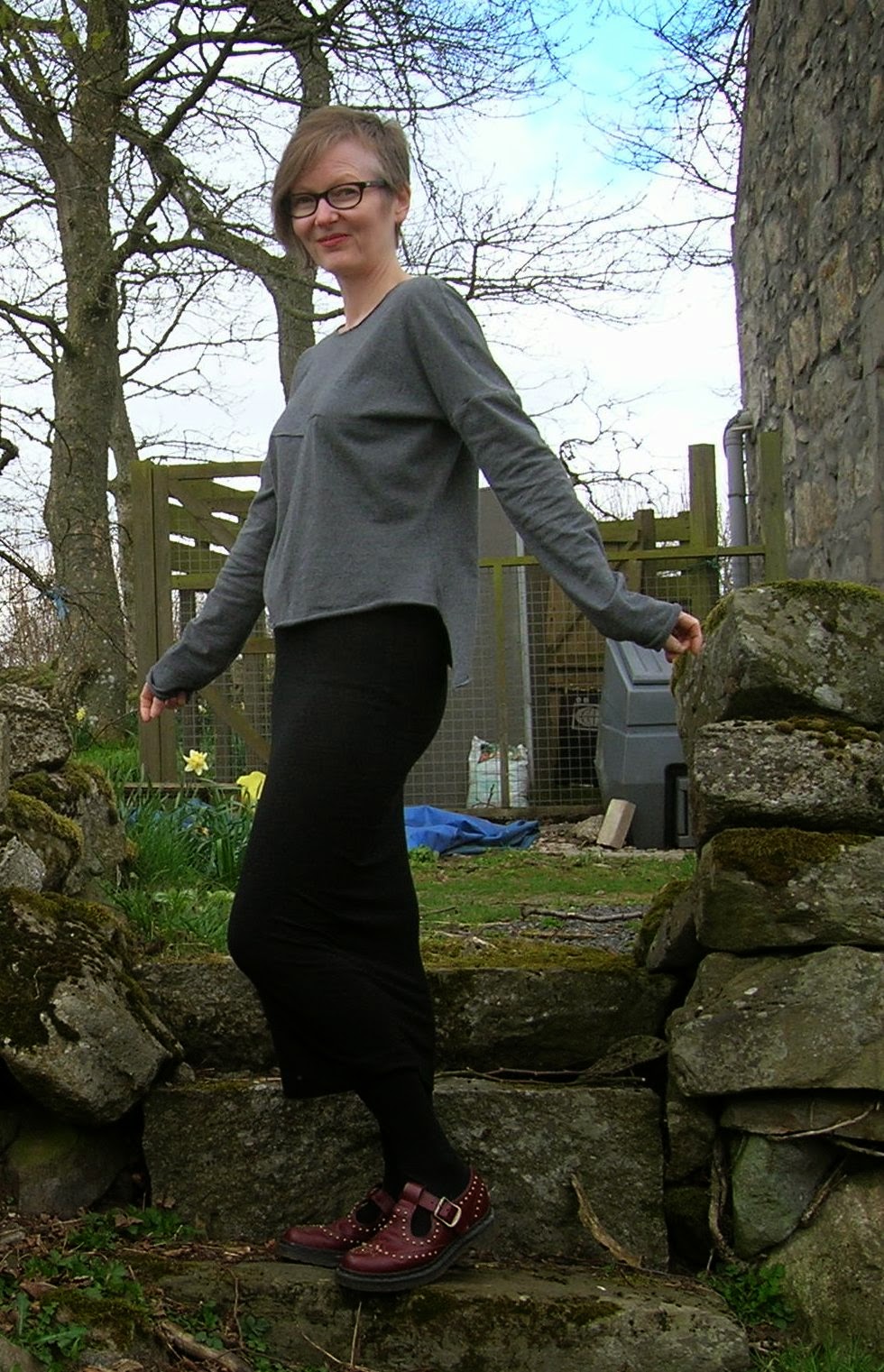 Verdict?
Pretty damned fine, though I say so myself!
It turned out exactly as I had hoped.
The neckline is flattering.
The hi-lo stepped hem is long enough to tuck into my jeans, but looks good worn loose.
I can pull the sleeves down over my fingers on a chilly day, or scrooch them up to my elbows if I get hot.
It is kinda cool and hip, without being too obvious.
Score! 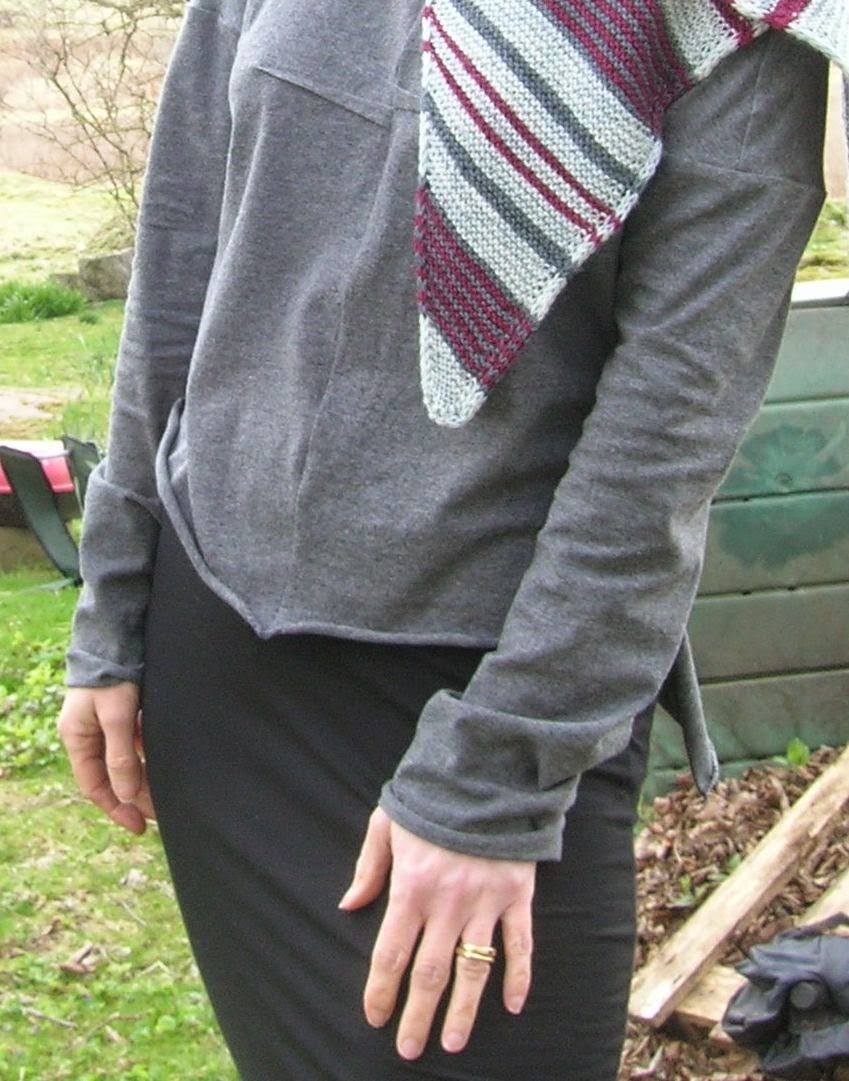 An added bonus is that it looks great with my test-knit of the Ad Hoc Mystery Shawl by Josh Ryks.
The first clue has just been released – so this is all I can show you!
You want to knit it now, don’t you?
Heheheh!