I am feeling better, both physically and mentally, than I have since being diagnosed with multiple myeloma.  My energy and stamina seem to be increasing, I feel well and, dare I say it, I am beginning to feel like me again.

Last week I flew to Denver BY MYSELF, got on the shuttle at the airport and made my way to the Inverness Conference Center for the Northwest/Southwest Regional Conference of Alpha Delta Kappa.  Still feeling a bit nervous, I told my husband that I wished I was home when I called him that evening.  Of course, that was upsetting to him.  However, by the next day I was enjoying myself and rejoicing in seeing my friends from around the country.  With each day of the conference I felt more self-confidence and it felt like my life was getting back to normal.

Recognizing that normal now includes multiple myeloma, it is still good to be  back doing things that were an important part of my life for so many years.  I have attended numerous Alpha Delta Kappa state conventions, regional conferences and international conventions since becoming a member in 1978 and it was tremendously comforting to be doing it again and feeling well. Multiple myeloma can’t take that away from me.

At the end of the conference, I felt like I had passed a major milestone and that I will be able to easily get on a plane to fly to Boston in two weeks to attend the Northeast Regional Conference of Alpha Delta Kappa.  I won’t be nervous to be going by myself  and I don’t think I will be telling my husband that I wish I was home as soon as I arrive.

I am off to the YMCA for the Livestrong Exercise and Thrive program……..

I am back from a good workout at the YMCA.  Up until now it has been so hard to make myself start exercising, but this program is great.  We each have our own exercise plan and we track our progress online.  It is motivating and just what I needed.  I have high hopes that I will get myself into better shape and even lose some weight along the way.

Yesterday, I noticed that my breathing was stronger and I began to wonder if my week in the high altitudes of Colorado had helped. Apparently, Olympic athletes train there to help with their endurance and strength.  I won’t be turning into an Olympic athlete any time soon, but I do feel stronger.

Realistically, I know I will probably continue to have ups and downs, but right now things are going well and I feel as though I am moving forward with the wind at my back and I am finding me again.

In Castle Rock, Colorado with Brent 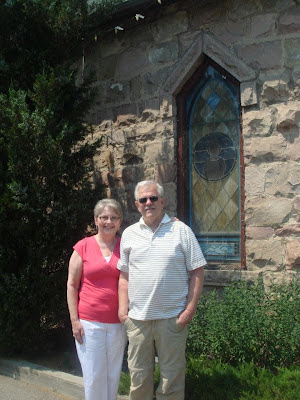 After the conference, my husband and daughter flew to Denver and we spent a few days with our niece, Tova, and her son, Charlie.  What a special time it was.  Charlie will be three in September and he is quite the dinosaur expert.  We wish they would move home to Washington State!