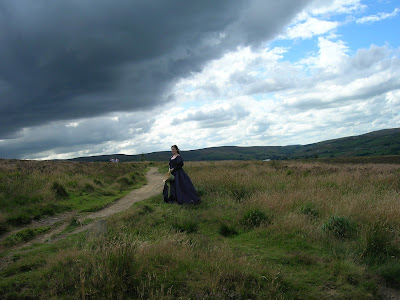 30 July would have been Emily Bronte’s birthday.
How would she have spent that day?
Walking on the moors above Haworth, sketching and writing? 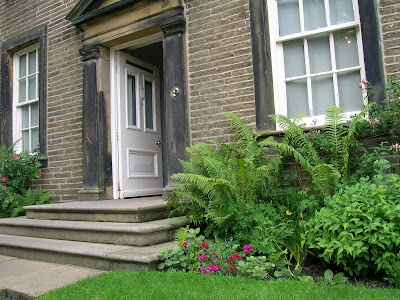 Or at home in the Parsonage with her sisters and brother? 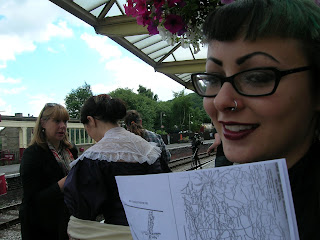 This year, the Bronte Society decided to commemorate the day with a special Excursion.
The Girl and I joined Emily on a trip from Keighley by steam train along the Worth Valley Railway, to Haworth.  On the train, we heard about the history of the railway-line in general, and trips taken by the Brontes themselves. 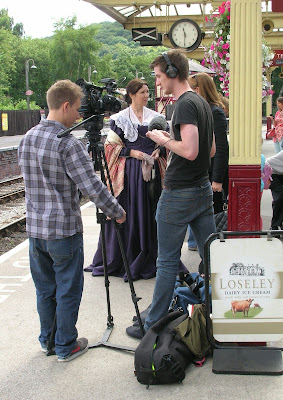 The event was filmed by a team from the University of Bradford who followed us around all day.
That’s “Emily Bronte”, in case you were wondering! 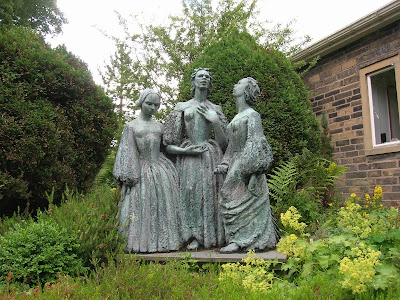 We were treated to a talk by the volunteer gardener, who has restored the Parsonage grounds using plants with which the Brontes would have been familiar.
And visited the wildflower meadow owned by the Bronte Society… where The Girl spotted the three sisters! 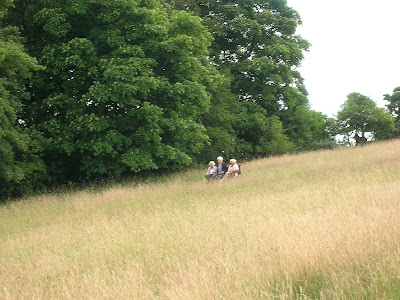 Then we walked up onto the moors through the churchyard, to learn more about the history of the village and the inspiration behind Wuthering Heights.  And I finally got it.  I have always preferred Charlotte’s work:  Jane Eyre, and even more so Villette.  But Wuthering Heights?  I tried to read that novel so many times and gave up.  It took the recent film adaptation for me to understand the plot and appreciate the themes.
Standing in the churchyard, as the Education Officer described what Haworth was like in the 19th century, I understood why Emily wrote as she did.  The violence. The passion.  The anger.
There are 42 THOUSAND bodies buried in that one small churchyard.  The average lifespan was 19 years, a statistic skewed by the infant mortality rate.  The village lies downhill from the churchyard.  People were drinking water that had been filtered through the graveyard…
Can you imagine how many funerals the Rev Bronte conducted in his career?
How much death the sisters witnessed? 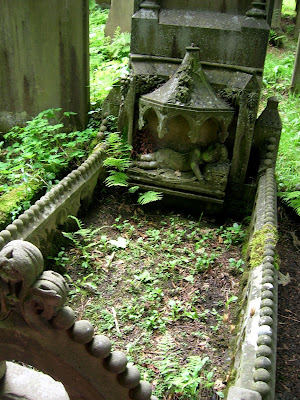 But the highlight of our day had to be the invitation into the library, where the Collections Manager showed us treasures from the Bronte collection:

And when I say we were shown them, I mean they were six inches from my hand because The Girl and I found ourselves right at the corner of the table, next to the curator. Just… wow!

It was the first time the Bronte Society has organised a tour of this kind and two more are promised next year. There is a tour of Ponden Hall (Thrushcross Grange) in September. If you can get there, you really should.