Swimming lessons have started again. As I reported last summer, kids at WCK’s swimming lessons are put into groups based on their swimming ability, and each group is named after an aquatic animal. The first level is Turtle, then Duck, then Penguin, then Walrus, and so on, all the way up to Whale. WCK passed the Turtle level last year, so I expected she’d be a Duck this year. WCK was tested on the first day, and she was thrilled when she was allowed to skip past Duck right to Penguin and join a Penguin/Walrus class.
I’m impressed, because I have no swimming ability. I don’t think I could hack it in a Penguin/Walrus class. Just think; this time next year, I could be the proud mother of a Walrus.
And with WCK swimming lessons come the infamous Swimming Lesson Coloring Sheets: 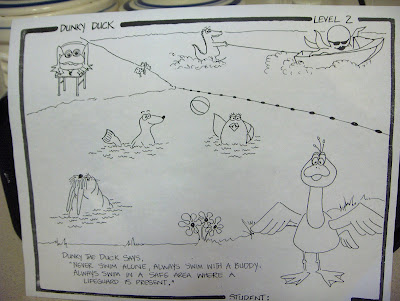 I wonder what is going on with the frog in the upper left-hand corner. Apparently, this lake had no mandatory drug testing during the lifeguard hiring process: 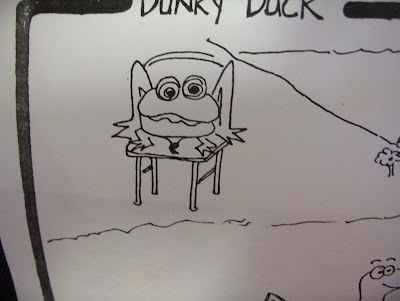