I was at the Royal Liverpool Hospital yesterday and had my bloods taken. Once the bloods were done I went down to the clinic to see the Doctor. Now I thought I was to go to J-K clinic which is were I went on Tuesday, now when you go to J-K clinic, you just sit and wait for the doctor to come out after seeing the the last patient, there is no receptionist to ask. So I sat down and waited and waited some more until it got to the point were I thought this isn’t quite right. So I knocked on the doctors door and opened it and nobody was there. I went around the corner and into another room where there was a doctor, but not one of mine (at least I think she was a doctor) I asked if Doctor Salim was running a clinic and she had no idea.

I went back upstairs and asked the nurse if I should be on J-K or G clinic and she said, oh sorry it’s on J-K on a Tuesday and G Clinic on a Friday. I didn’t mind the waiting and the confusion as I still had to wait for my bloods to come back, which takes about an hour.

I went down to G clinic and they had no record of me and had to go and asked Dr Salim who told them that they would fit me in with one of his colleagues. The then had to find my notes as they didn’t have them. Eventually they found them up on 10z where I had my blood taken and they were sent down, 10z being on the tenth floor and G clinic on the ground.

When I got in to see the doctor, he went through the usual question. Also as usual he told me that I need to drink more as my urea test is showing low.

With him telling me this I knew that my blood results must be back from today. Last Tuesday I had the test to tell me what my paraprotein was. He brought the results up on screen and pointed out that they are showing 200 (OMG). Thank goodness though he was telling me the Kappa Light Chain reading. I said that doesn’t mean anything to me, as I’m normally told the paraprotein level, after him giving me a little speech about the Kappa Light Chain reading, I had to ask again does he have the paraprotein level. Eventually he told me that it was 55. If you remember prior to my transplant it was in the 20’s so it has gone up over double. Thankfully though he told me that it was too soon to tell as it will go up and down and then it is the average of the Kappa Light Chain and the Free Lambda over a period of time. He reassured me that it was nothing to worry about. I wasn’t really convinced, but I will have to wait probably another couple of months before I can find out for sure. I suppose I was asking too much to find out after only 5 weeks of having a transplant, most people are still in hospital still.

Now onto the other issue I’ve been having. I’ve been very tires as I mentioned in my other blog post. I’ve also had the shakes, with my whole body shaking at times. My hands would twitch as well. It was making it difficult to type or use my Tablet computer as my fingers would involuntarily press random keys and tap the screen. I felt as though I wasn’t in control. I told the Doctor about this and he told me that it was quite normal and I would feel very tired for several months as my body needs to recover. 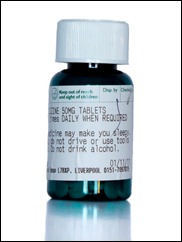 When I got home I was taking my tablets the first ones being the cyclizine which is the new anti-sickness drug they gave me last week. That’s when alarm bells rang and the connection with when I started to feel very sleepy. I looked at the label on the bottle and it says it may caused drowsiness and a warning not to drive. Mmmm that’s also the time the shakes started, so I didn’t take the cyclizine, but too the ondansetron instead, which is another anti-sickness that I know I’m ok with. After taking my other medications, I went strait to the computer to find out what side effects the cyclizine has. Although on the first medical sites it didn’t list any of the shaking, I then found a user forum with feedback from patients who had been on the cyclizine. There were a couple where they were saying that it worked OK, but there were more that were saying not to touch the drug as it nearly killed them! This is the link so you can read it yourself, rather than me list them.

I decided after reading this that I would no longer use the cyclizine and go back to the Ondansetron which I felt much happier with. The result this morning, well I no longer have the shakes and don’t feel as sleepy as I have done over this week. So hopefully I will have a better week this week and wont be shaking or having to go to bed all of the time. All just because of a drug that I used as an alternative, to see if it worked better.

I will blog latter on today, which will be Day 30 and let you know how I feel after having a day without it.