Skip to content
When I fall from the wagon, hiding from the businessmen, won’t you find a way for me somehow?
Syrups – Foals
… KFLC (29/4) = 272 … That’s a 1/3 drop, after 3 weeks of daratumumab … Currently on week 5 …
It’s been a while. Much has changed. (Though the underlying predicament, has not.) I guess I’m bringing dialm back out of cold storage.

Having completed 4 cycles of RCD (lenalidomide based regimen), I had to stop treatment due to a collapse in my platelet counts. We’re still not 100% clear why this happened – could be treatment toxicity, could be autoimmune (chronic ITP)… who knows. Whatever the cause, for more than a month I needed platelet transfusions several times a week. We attempted to treat the problem with pulses of high dose steroids, and by putting me on a drug called eltrombopag that should stimulate platelet production/retention. Eltrombopag is a bit hard on the liver, so I’m not allowed to consume dairy products (or anything containing calcium) for large parts of the day. As a cheese lover, that’s a bit of an issue. My calcium levels are often low and I’m always being instructed to take calcium supplements. But since the calcium seems to collect as stones in my kidneys, I’m a bit reluctant. Finally, three weeks ago, my platelet levels began to recover. A relief – it’s unnerving to know one is being kept functional/ alive by blood donations. And it’s very restrictive having to spend so much time in hospital. I’m fed up of looking like a junky with track marks and bruises everywhere. To top it all, we were supposed to be going away for the weekend, and were forced to cancel the trip at the very last minute, as I was advised it wasn’t safe for me to fly. Instead, a weekend in Sussex, with regular messages on our phones prompting us to check in for abandoned flights and hotels… We do our best to keep cheery and positive, despite events, but it’s not always easy. Having a platelets crisis has been yet another crappy unpleasant disruption I could have done without. Add it to the long list of challenges I have had to overcome, this last year.

I had an inconclusive bone marrow biopsy two months ago, which didn’t explain my platelet problem or my apparently recurring disease. We decided we’d have to do it again to see if we could get a better sample. Every biopsy is an ordeal; it always takes repeated attempts to get a solid sample out – inject, stab, dig, hammer, pull, wince, repeat. In total, we have dug our 5 solid samples – of various qualities – in the last few weeks. My pelvis must resemble Emmenthal. Submitting to it repeatedly, in the knowledge that it may well be futile (there may not be enough good marrow to get a decent sample) requires a certain kind of resignation and acceptance. The doctor was as troubled by the process as I was, by the time we were repeating it for the 5th and final time: the first occasion I’ve observed my predicament cause visible distress in the person treating me. I’m deeply grateful to the professionalism, and the dignity, of my medical team. Perseverance paid off. The 5th sample was “good”, though the payoff was bad news. My marrow  was 80% plasma, when it should be <5%. Most of my marrow is myeloma – and the good marrow is squeezed into just a fifth of the space. This result would count, on its own, as active/progressive disease. And in the time off treatment, my light chains jumped from 150 to 410. The conclusion was that the lenalidomide hasn’t worked.

So, that means we’ve tried two different lines of treatment, both unsuccessfully. It appears my ‘eloma is refractory to proteasome inhibitors (bortezomib and ixazomib) and to imids (thalidomide and lenalidomide). According to The NHS, the next drug to try is daratumumab, a monoclonal antibody. This is a completely different approach to attacking the myeloma. I need to hope that we are successful, 3rd time lucky. Dara works by bonding to a surface protein (CD38) which is present on plasma cells but not much else. The dara triggers immune destruction of plasma cells – hopefully very specifically my myeloma, though it is likely to leave me immune suppressed too. Dara is a different kind of proposition. It’s much less likely to trigger normal chemo side effects (nausea, hair loss, neuropathy etc). But much more likely to cause infusion reactions. So the first time I take it, they put it in really slowly over the course of 10 hours, with all of us watching out for any reaction. It turns out to be very uneventful – I avoid any of the infusion reactions I had been warned to expect. But it still makes for a very long day in the ward. I am grateful to have a visitor to while away the time with chat (and frothy coffee, once we are >4hrs from my daily dose of eltrombopag). 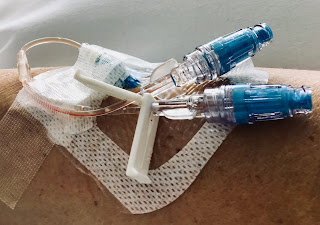 For the time being, the plan involves weekly daratumumab infusions. Hopefully, they will continue to be uneventful. Though they will also be slow. I’m also needing to make a second trip to the hospital each week, to check in for support and, as necessary, to drop up my platelets, or administer G-CSF, or get ticked off for my poor electrolyte levels. For at least the next couple of months, that’s my routine. It will be a while (I don’t know how long) before we have any robust indication whether this approach is truly working. The initial response seems very positive – KFLCs dropped from 410 to 272 in the first 3 weeks. And the side effects are not too bad. Nothing at all as the drug goes in. Only limited amounts of drowsiness from the antihistamines or insomnia from the steroids (a different steroid – methylprednisolone, which is much less potent than dex). I’ve felt ”flu like” symptoms at the end of the week, but even those seem to be waning with each succeeding dose (#5 yesterday).

It’s easy to forget that all the treatment – 3 different protocols over more than a year – has been directed to a single destination: to have another stem cell transplant. We harvested new stem cells for this purpose; and in November we came within a week of doing it. The stop-start experience, and never quite knowing what time horizon I can hope to be “recovering” over, has been difficult to process mentally. But despite the frustration, I accept that we can only make plans on the basis of the circumstances. Statistically, a stem cell transplant is likely to be more beneficial if carried out when my myeloma is in remission. And that just hasn’t happened. If we had carried on regardless, the prognosis would not have been great – we’d likely have “wasted” the potential benefit. And we won’t get another chance: realistically, I will only be young enough and strong enough to undergo that kind of procedure once more.

However, another worry has grown, as we’ve struggled to find a drug regimen that works. Even assuming we get my myeloma into remission, we know it won’t stay there forever. I could continue on daratumumab for along time, if it works, but ultimately, it will fail. Similarly, another transplant might last many years,  yet not forever. And actually, the likelihood is that it will last less than the last one – so I’m looking at another relapse in 3 or 4 years, if I’m lucky. Given how difficult this relapse has been – how long it has taken, how much bone damage I sustained again, how many treatments we have tried and failed, and all the complications – I’m prepared to admit to being a little frightened at the prospect of the next one. Likelihood is it will be even rougher. I don’t really fancy my chances.

So, the doctors’ most recent suggestion is that we might head in a different direction, and they have put my name on their list for the CAR-T trial which has recently opened at Kings (so far they are treating 3 or 4 lymphomas/leukaemias this way and due to begin for myeloma imminently). CAR-T therapy harvests T-cells, modifies them to become myeloma antibody producing cells, and then reintroduces them, hopefully making one immune to one’s own disease. It has the potential to be curative, though it’s too new to be sure – there hasn’t been enough time to show whether the modified T-cells persist, or whether the myeloma eventually mutates to avoid them. I have assumed for a while now that this is the treatment I should ultimately be heading for. But there’s always an advantage in letting other people do the early trials, and following on when there’s more established experience. People have died in early CAR-T trials. It’s not without risk. However, I’m increasingly thinking that the biggest risk, for me, might be the next conventional relapse, by which point it may prove impossible to get my myeloma back in to remission, and where I might be too frail to withstand the CAR-T process. My best option may be to take my chances while I can. I’m lucky that the trial is available at Kings, and I am eligible (at least, I will be once I’ve had a course of daratumumab). That’s “the plan” as it stands – some combination of ongoing Dara, SCT and/or CAR-T. My hunch is that the docs will want me to have them all, if I can hack it. I have no idea how soon we’ll be ready. I guess it depends on my response to the daratumumab.

So… 2019 is proving a lot better than 2018… I’m sick of having my life put on hold by endless dramas… a period of relative peace would be invaluable. I think there’s a chance we might be able to book a last minute holiday for half term. I’ve even provisionally rebooked the recently abandoned weekend break. Maybe this summer, I’ll actually enjoy instead of merely endure.

The thing about myeloma, is it’s relentless. There’s never a day off. Never 5 minutes off, really. And when things get really hard, it’s like being dropped down a deep hole. Sometimes (often) good and bad days alternate. But one wakes on the good mornings at the bottom of the hole, and sometimes can’t be bothered to drag oneself out. Especially if tomorrow is likely to involve being pushed back in. Which is all to say that though there have been plenty of respite days, these last 18 months, it has been impossible for me to commit to anything, or achieve much against any set of tasks I might set myself. So many things I want to do and be, but can’t. I’m hoping that, at last, treatment becomes sufficiently uneventful to let the rest of my life begin to regrow.

Thanks, as always, to those who have propped us up, in the last few months. Our needs are sometimes invisible, from the outside, but up close, the intensity and unpredictability of this whole journey is quite debilitating for all 5 of us. We’re grateful for the support: flattered that people care and haven’t succumbed to compassion fatigue by now. Our needs probably won’t diminish much over the coming months. Thanks for sticking with us. It’s all a lot better than it was, but still quite challenging. Lyndon turned 7 a few weeks ago. Back in the early days, when I was pretty much bedridden and he was a bouncing baby, I used to take much solace in his smile. “You’re the reason” I would remind myself: hope and potential, to incentivise me; sustain my willingness to succumb to whatever treatment is proposed; and to live through whatever sickness and pain the myeloma doles out. 7 years later, my kids are still smiling (Marisa and I must be doing something right!) I’ll try to match them. “Garde ta foy” as my college motto goes ( = “keep the faith”, though we used to mistranslate it as “look after your liver”. We were so droll).