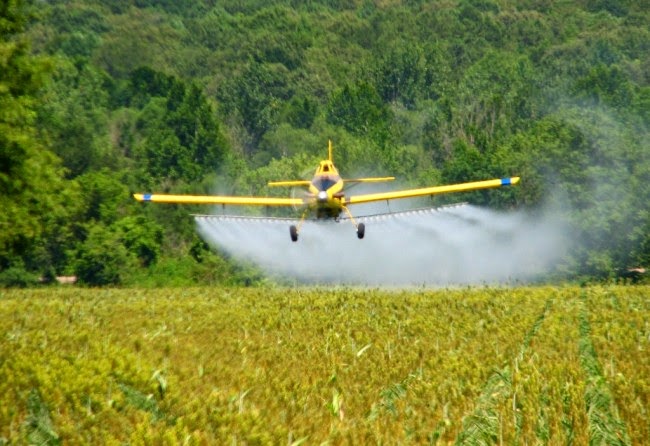 In a recent report released by Norwegian scientists and researchers studying genetically modified organisms (GMOs) and other genetically engineered produce in the Unite States, GMO foods across the U.S. have been found to contain absurdly dangerous high, levels of Roundup, a product used to kill weeds and ward off various harmful insects.

As Roundup is known as a weed-killing poison, one should probably ask why this particular substance would be used in the very food which keeps humans alive.

The answer lies in customer demands at the grocery store for flawless produce and goods, but this demand comes at a cost. Hence, the Monsanto Corporation in particular has both used this demand, as well as utilizing cheaper means of producing food, which looks delectable and sells quickly.

However, the chemicals and pesticides used in growing food products across the country, specifically GMO produce, present a grave health risk to many Americans who continue to purchase these foods containing pesticides like Roundup and others every single day.

Showing dangerous levels of glyphosate (the chemical manufactured to kill weeds, and used in Roundup), genetically engineered soy is frequently used in feed for animals such as cows, chickens, pigs, as well as feed for turkeys. Glyphosate has also been frequently found in non-organic foods, mostly in packaged food items and a range of GMO products and foods across the U.S.

GMO foods, with the aid of the kinds of chemicals found in Roundup, are altered in such a way that would not and could not ever appear naturally in nature. Corn, soy, beets, and canola are some of these main crops which are both GMO and are often treated with Roundup.

As the Norwegian study states, weeds are now becoming resistant to glyphosate. Farmers producing GMO produce spray more and more Roundup, and the chemical has infiltrated crops that consumers purchase on a day-to-day basis.

Allowed by the Environmental Protection Agency (EPA), non-organic farmers have been allowed to use such chemicals, and this has resulted in increased levels of glyphosate in foods across the U.S. The rise of hard-to-kill super weeds has only seduced the EPA to raise these residue limits by 200 percent, specifically in soybeans.

The conclusion of the report shows that between genetically engineered soybeans, traditional (non-GMO) soybeans and organic soybeans, all GMO soybeans had high levels of glyphosate, and were found to have less nutritional vitamin content than what is found in traditional soy. Organic and non-GMO soybeans did not show any traces of glyphosate. Soybeans which were organic also provided more nutritional benefits, including higher levels of protein and less saturated fats than GMO soybeans.

Based on the studies mentioned, are dangerous levels of Roundup in GMO foods found across the U.S. something that Americans actually want? The general consensus seems to be negative. GMOs in general have already been recently banned in Bavaria, Germany, and the U.S. state of Vermont has now required complete labeling of all products with GMO origin. The task now is to determine how such powerful companies, Monsanto especially, will work to help repair the current system of allowing GMO produce cultivation, or must citizens act in order to halt GMO production?