Received my intravenous carfilzomib and oral dex this morning at St. Luke’s Hospital in Twin Falls and was on my way home to Mackay in a snowstorm by 8:45 AM.

I followed a snowplow for the first 30 miles which was the pits and would have given Bart (2006 Honda Pilot) pits in the windshield if I’d attempted to pass. 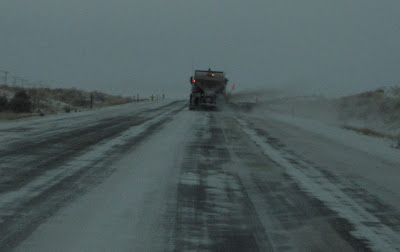 Then from Shoshone to Carey, the road looked like this: 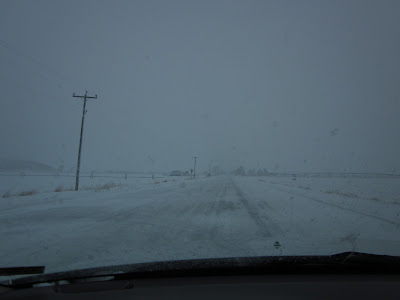 The road through the Craters of the Moon was interesting because the snowplow had come through from the opposite direction and filled my lane with more than a foot of snow. So, I drove in the oncoming lane watching for oncoming traffic (not much) and had to move over in to the deep snow in my lane – for 20 miles or so. 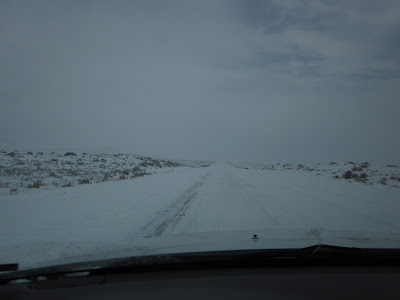 I made it home by 12:15 PM – just an hour longer than it normally takes me. But, I have to admit, I was TIRED. Stopped at my father’s place to check on him and pick up Kemmer. He is fine and Kemmer was DELIGHTED to go home.
I also had a weird vision deal begin in both eyes. My central vision was clear, but around each eye I had flashing (moving) flickering lights that didn’t go away even if I closed my eyes. I’ve never experienced anything like this before and I looked up the side effects of Cytoxan (took 500 mg yesterday) and the only thing different recently. Cytoxan can cause blurry vision and although the side effects didn’t describe anything like I was experiencing, I was sure it was from Cytoxan. I decided to take 8 mg of Dex to see if that would help – IT DID. I had taken 4 mg of Dex with my carfilzomib this morning, so that made 12 mg for the day.
We had 5-6 inches of new snow here in Mackay and I thought I’d take a nap and then get out there and move the snow in my driveway with my 4-wheeler with a snowblade. Well in to my nap, woke to Steve Marinac on his 4-wheeler with a snowblade clearing my snow – so nice and I’m not sure I was up to it.