A couple of people made fun of my mathematical aside yesterday – perfectly reasonably. I am part maths-nerd (amongst everything else). Myeloma is a lot about numbers. Because it’s so damned complicated.

The earliest organisms to develop differentiated cells, some 700 million years ago, included early sponges. They developed cells with a specific function, which scientists call archaeocytes. Before that, all the cells of a multicellular life form were the same – like slimes and moulds still are. Archaeocytes specialised in transporting energy from one cell to another, and possibly also immunity. They were the prototype of blood (hence the name). They continued to evolve, some becoming the first stem cells – capable of creating specialised cells for many different roles. That is the basis for the evolution of organs, and organisms as we recognise them. I don’t know if we evolved from these sponges, or in parallel but it seems to me that our organs and our bones have evolved out of our blood. It explains why blood cancers are so complicated – they are within very old genetic code.

Our blood stem cells live in our bone marrow. And myeloma is rogue immune system cells, caused by a defective stem cell. Bone marrow is pretty inaccessible, so the best way to monitor what’s going on is to see what’s in the blood – what are the stem cells producing. I have lots of daily blood tests. My ‘eloma produces “kappa light chains”, so that’s the proxy measure for my tumour load. Your kappa-FLC score is probably about 20. Mine is 500. At diagnosis, I was at 1,300. So we’ll be watching to see if that comes down further in the next few months. (The actual numbers are somewhat arbitrary, each case of myeloma can produce different quantities of light chains.)

In the mean time, we’ll be watching the rest of my blood because with my bone marrow nuked, I’m inevitably going to have a few problems in the weeks ahead.

Haemoglobin: 10.8
Red blood cells carry oxygen round the body, using haemoglobin. A normal haemoglobin count is >14. So mine is already low, but that’s been true for ages (and explains why I suffer fatigue). This will probably drop from now on. If it gets to 8 then I’ll need a transfusion (pretty likely).

Neutrophils: 3.84
Various types of white blood cells control immunity. We’ll just follow neutrophils as an indicator. Normal is >2.5. So I’m doing fine so far. In fact, I feel a bit of a fraud even being here. This will drop soon. I can’t have a transfusion of white blood, so we just have to wait until my stem cells get to work. If your neutrophils were <1 you’d be told you were neutropenic, but we won’t pay much attention until mine are <0.5 and we won’t get really excited until they reach zero – which will mean I have no immunity. When they start to come up again, we will know my stem cells have grafted.

Platelets: 303
Platelets control blood clotting. Normal is >150. So I have plenty (my nurse says I have enough for the whole ward). I’ll need a transfusion if these fall below 20. But even before that I’ll have to be careful not to cut myself. So, while I’m still ok, I decided today was a good day for a clean shave – by the time it all starts falling out (which it is certain to do) I will probably not be allowed to use a razor. 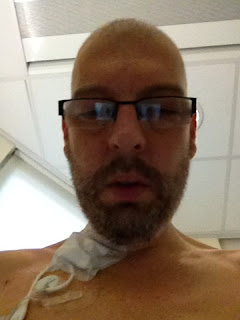 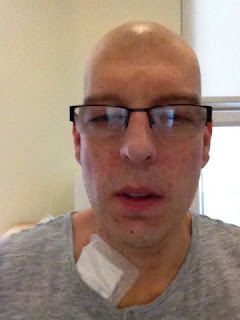