It has been seven whole days since I was told that I could go home and indeed, went home, leaving my week stay at St Bart’s but a distant memory. The latter part of that sentence is total bollocks by the way, the schedule of an allogeneic SCT, even if it is just a mini one like mine, makes it next to impossible to pretend that the hospital is just a misty water coloured memory in the corner of my mind. In the seven days I have been home, I have been to St Bart’s twice and in touch with them via phone or email on three other occasions. Essentially, I have been in touch with said hospital every working day since I left it.

My bloods might be going in the right direction and the medically Trained People are making all the right noises, but did I leave there too soon? How the heck should I know? I spent all of Monday in hospital being tested for bugs and slugs in isolation, because they was a question over my current health.

If you were to speak to me or see me over the last week, you would probably conclude that I did leave too soon.  On Monday, a Medically Trained Person was asking me complex questions like “what was the date of your transplant?” and “what did you do before all of this?”, and I felt like I was taking my French oral GCSE without revision. All I could do was apologise that I could not speak normally. Essentially, you are looking at slow, occasionally drawling slur.

I have had two stem cell transplants before this, they were autos, meaning the cells were my own and the recovery was hard, especially after the first one. All so very hard. Upon discharge after both transplants, I got into a car and went straight back to Mamma Jones’ to be looked after until I felt like I could take a stab at doing it myself. My current treatment regime does not allow for that sort of leisure. It barely allows for sufficient rest.

Upon leaving last Wednesday, I was told that I needed to return on Friday or Saturday and then again on Monday for a Doctor’s appointment, leaving little time to make the four and a half hour round trip journey back to the Fens. And so, I decided that I would stay in my flat, with Housemate to help me until after the appointment on the Monday. There are many things one could say about this decision, but for today at least, as I continue to struggle to find my words, let’s just say it was decision most ‘foolish’.

I knew these facts last Friday, when with my bags still packed from the hospital sitting in my hallway , I phoned Manma Jones crying because my hair had started to fall out and I needed an hour’s lie down post shower, pre dressing in order to make myself presentable for blood tests. An hour after that I spoke to Big Sister and three hours after that she was at my front door ready to drive me back to the house of Mum Love. That night,  100 miles later, my mother needed to help me into my pyjamas. I then spent almost 23 hours of the next day sleeping. I did something quite similar yesterday, although yesterday, I only ate when food was presented to me at 18:10hrs. The previous day, after nine hours in the hospital, I realised that I had forgotten to eat anything at all.

In hindsight, thinking that I could look after myself straight after receiving seven days of round the clock care, was just bonkers. Of course I have a Support Network in London led by Housemate and Bruce, but one of them is not anatomically capable of putting me in my pyjamas and the other one would be mentally scarred by the concept. Essentially, London assistance isn’t the same as the one I get with Mummy. The people of London have no reason to stand by me when I scream and shout and let it all out, and if I were being perfectly  honest, I will always try my hardest to avoid too many people seeing me at such a low ebb. A location I have been flirting considerably with this last week.

I am trying not to overthink the situation because I know there is no turning back now and I also know how fortunate I am to be in this position in the first place. I just wonder that if I am finding this transition so difficult now, how the devil am I going to manage when the real thing gets started in a few weeks time? That’s rhetorical.

Some of you may be fortunate enough to have never been an inpatient in a hospital, so let me tell you that whilst in hospital one has little to no privacy even with the privilege of a private room. The NHS, the wonderful and flawed NHS, pays people to create and deliver a care plan, cook and carry  three questionable meals a day, waters you, takes your blood, check your pulse, breathing and blood pressure, prescribe and deliver the correct drugs at the right time and ensures said drugs are swallowed, they change your bedding and clean your room daily and these are just the people you see. Those tubes of bloods and tubs of my urine had to go somewhere, to somebody to check and the results put on to a computer, even if I wish these tests were done with greater haste. My point is, when one is an inpatient, all they have to do is try not to get too irritated by the lack of privacy. Everything else, even if it is not done to a quality one is quite used to, is done for you. One Sunday, for example, the threshold to my room was crossed 47 times in a 24 hour period; 45 times by Medically Employed People and twice by members of my Suppork Network. I do not know for what reason I documented this, but I believe it validates my next point. 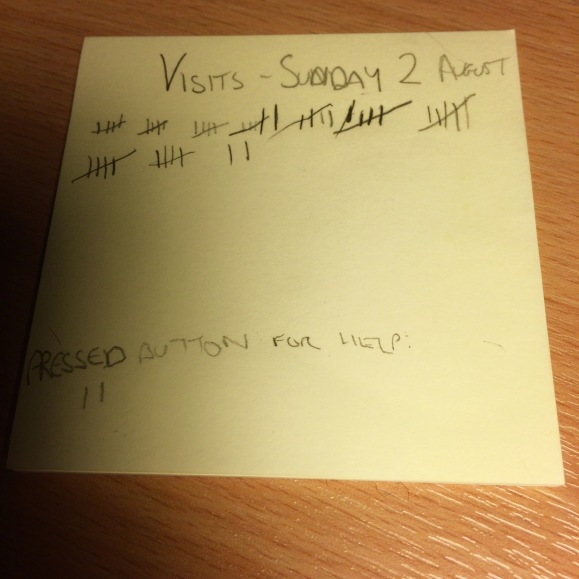 The minute I walked out of the East Wing last Wednesday afternoon, all the responsibility for doing all of those listed above bar the things done by those unseen technicians handling my bodily fluids,  fell back on to me. It fell on to a me who continues to be nowhere near capable of doing such things alone. I can barely remember to drink, let alone to prepare the food I do not have the energy to eat, and remember to take the 20 odd pills I am prescribed each day at the correct intervals. And then there is cleaning, I attempted to lint roll my pillows today to remove evidence of my shedding hair and Inhad to do it in four separate sessions.

I went into my treatment with my eyes wide open. I knew it was going to be difficult, but I did not think that I would be doubting my ability to see it through so early on. A friend said to me earlier that I had rhino skin, which I sincerely hope is true for no other reason than all this treatment is actually going to make my skin thinner. Not just metaphorically thinner, but old-lady-be-careful-with-the-plaster-thinner.

I think I just need a few weeks in bed to rebuild, but that is not afforded to me.

My transfer to St Bart’s seems to symbolise much more than a change in venue for my treatment; everything seems different and all of it seems out of my control. Even though I may allow myself the occasional daydream that this time next year ‘I could be normal’, I am also a realist. I know that what is still to come is going to be so blooming difficult and I’m struggling to see where I am going to find the strength from to achieve my goals. My treatment feels relentless. This is relentless.

Prior to my discharge last Wednesday, I was asked to read an 79 page leaflet from Anthony Nolan called ‘The Seven Steps: The Next Steps’. I knew the contents of it, but I do not know if on the day I was getting to go home after spending a week in a drug fuelled neutropenic haze, I needed to read “it is important to remember that although you are being sent home from hospital, and an important phase of the transplant process is complete, it will be many months before you are fully recovered”. Define ‘many’.

The treatment is intense and I have not had find time to catch my breath. Reading that leaflet seemed to have cast a spell over my whole week. I do not normally feel so negative. That leaflet basically said, don’t relax yet, for the worst is yet to come.