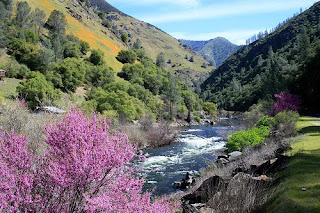 This week one of Sue’s cousins from Massachusetts, Bruce MacLeod, came to visit. He had scheduled the visit shortly after he learned that Sue was going to come home to enter into hospice care. Bruce and Sue were both born in 1956, and had a special bond formed over years of coast-to-coast family visits. Bruce had hoped to have one final west-coast visit with Sue, but it was not to be. He kept his travel plans, nonetheless, and I took some time off and traveled about southern and central California with him.

This was something of a full circle visit. Sue and I had met up with Bruce in Colorado Springs, Colorado, in August of 1980, about 3 months before Sue and I got married. We were on a trip to visit some of Sue’s relatives, including her mother’s sister, Polly, who lived in Colorado Springs. Cousin Bruce is the son of Sue’s mother’s other sister, Nancy, and he met up with us in Colorado Springs at Polly and Bill’s house. Following our visit with their Aunt Polly, Sue, Bruce and I had a series of little road trip adventures to places like Cripple Creek, Pike’s Peak, and Kansas City.
Sue and I met up with Bruce on four other occasions in the intervening 30 years. In 1987 Sue and I attended the 100th annual reunion picnic of the Davidson clan near Worcester, Massachusetts. Davidson is the family name of Sue’s grandmother who was Sue’s mother’s mother. Our daughter, Jessica, was six weeks old at the time. Bruce brought pictures to California showing tiny Jessica being held by the oldest Davidson at the reunion, a lady who was (as I recall it) ninety-some years old.
In 1986 Bruce came to California and Sue went camping with him up at Lake Tahoe. In 1990 Bruce came to California again, and, among other things, went to Yosemite National Park with Sue’s dad, Don, who’d worked for several summers during college at Yosemite. Bruce shared the love Sue and I had for nature and the mountains.
In 1998 Sue and I planned another trip back to Massachusetts with our two pre-teen daughters, ostensibly to attend Bruce’s wedding to his long-time love, Beverly. About a week before our departure we were notified the wedding was called off. Darn! We already had our tickets and our travel plans. What the heck? We went anyway, as did all the other relatives. It was a great time of family gathering.
Bruce is a United Church of Christ minister with masters and doctoral degrees in theology. He currently specializes in being an interim pastor to churches in transition. What that means is that Bruce helps churches through times of grieving for beloved pastors who’ve moved on, and helps them re-define their identity and ministry objectives, and then helps them move on to new things. Bruce and I have connected not only as related through Sue, but also as brothers in Christ who, like Sue, love the wilderness and who love to experience and ponder and marvel at the beauty and magnificence and grandeur of God’s creation, and also as two intellectual wanderers who hold comfortably to the truths we know of God through experience, and who live comfortably with the unresolvable dichotomies and ambiguities that truthful seekers identify and acknowledge.
About two weeks before Bruce was scheduled to come out to California I emailed him to inform him of Sue’s passing. Darn! But Bruce already had his tickets and his travel plans. What the heck? Bruce came out to California anyway, even though Sue had passed away, just as we kept our travel plans to Massachusetts after we learned that Bruce and Beverly’s wedding had been canceled. Life is funny that way. But what I didn’t know was that Bruce, the interim pastor, was coming to California on a different sort of interim ministry assignment; And quite possibly Bruce didn’t know it either. 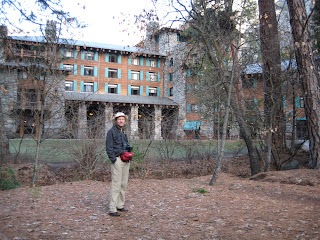 And so Bruce and I had a re-connecting California road trip. We didn’t take Sue’s ashes along with us, but she was with us in Spirit. Thursday, April 15, tax day, we drove to Yosemite to stay in the famed (and not inexpensive) Ahwahnee Hotel, which neither Bruce nor I would likely have booked for this trip except that Sue had instructed me in the week before she died that Bruce and I should extravagantly enjoy our time together compliments of her and her life insurance.

Thursday was a sunny day, blue skies with patchy clouds, about 65% F. As we came into Yosemite Valley along Highway 140 via Mariposa and the Merced River canyon, the foothills were still green from recent rains, and the wildflowers were beginning their resplendent spring bloom. And as we progressed up the Merced River to Yosemite, the famous granite canyon walls began to soar above us to the right and left, and, as had become Sue’s and my custom on entering Yosemite Valley, or when driving it’s incomparably scenic Tioga Pass road, we played soaring tenor opera music at 3/4 volume with the windows rolled down and the sun-roof rolled back. Bruce had selected Adrea Bocelli’s Sogno C.D., and as we listened to Bocelli sing Canto Della Terra (Song of the Earth) in Italian, I thought of Sue, and the tears flowed and streaked my face below my sunglasses and whipped away in the brisk incoming road wind.
“Yes I know
My love, that you and me
Are together briefly
For just a few moments
In silence
As we look out of our windows
And listen
To the sky
And to a world
That’s awakening …”
“Look at this world
Turning around, with us
Even in the dark
Look at this world
Turning around, for us
Giving us hope, and some sun, sun, sun” 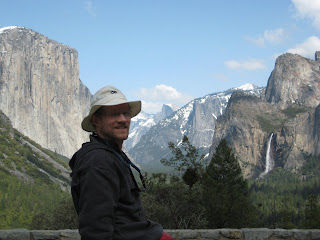 Bruce and I drove the few miles up to the tunnel view overlook for a fantastic mid-day view of Yosemite Valley from above, the familiar Half Dome gleaming and snow-capped in the distance and all the canyon rimmed with snow. We then visited Bridal Veil Falls, full-falling with fresh rain and snow melt, with the sunlight pouring through the mist created by a great wall of water falling a thousand feet and being dashed against granite boulders. The bruised water then collects itself in a roiling turmoil and moves on — surging downhill to find a destination and purpose as-yet unknown to it.
And as Yosemite itself shed tears in streaks down its granite cheeks, Bruce and I moved on toward another destination and purpose as Bocelli and Celine Dion sang “The Prayer.” 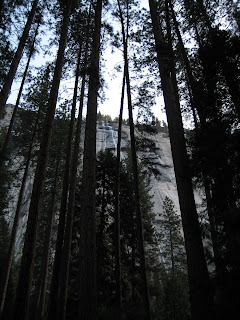 “I pray you’ll be our eyes, and watch us where we go
And help us to be wise, in times when we don’t know

Let this be our prayer, when we lose our way

Lead us to the place, guide us with your grace
To a place where we’ll be safe.” 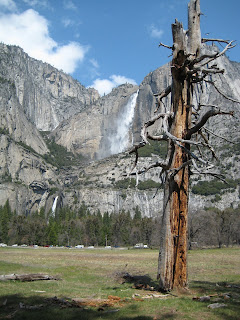 Our room at the Ahwahnee had a fantastic view of Yosemite Falls. And for two days Bruce and I became like the Ahwahneechi Indians who once lived in Yosemite Valley, and we listened to the Song of the Earth as we trekked around in what John Muir described as God’s most beautiful Cathedral; And we enjoyed the succulent bounty of the Earth as much as Solomon ever did; And we rested under the watchful stars and the eyes of God, and, perhaps, those of Sue, as we each sought something, as-yet unknown to us, which would be our next destination and purpose.
…
As I dropped Bruce off at the airport this afternoon I was glad for the time we’d shared. But driving away I had the sense that we were like two snowflakes who’d just drifted down and landed briefly, side-by-side, at the very peak of the continental divide along the spine of the Rocky Mountains west of Colorado Springs. And Bruce had fallen just next to me on the eastern edge of the watershed, and I had fallen on the western slope. And though we’d fallen close enough to touch each other, as we melted and resumed our journeys, he coursed eastward and I coursed westward, and once again we became different voices of the great Canto Della Terra. And I wondered if we’d ever meet again.