This past year, this beautiful boy was a little less active, but still his happy, loving, playful, goofy self. Nothing raised a red flag at all. Until January. Early last month, I noticed he looked a little swollen in his abdomen, girth area. I thought my hubby Jim was feeding him more, as this has been a “war” between us all our lives. Jim loves to show “love” to all our critters with treats and extra kibble. But when we would pet Pawsy, we noticed his collar was loose, and in certain areas he was a bit boney, so this didn’t make sense with his swollen belly. I scheduled our wonderful horse (and all animal) Veterinarian for a “ranch call” and he quickly knew “something” was up. Next day we went to his clinic for xray scans. Sure enough, Dr John saw lots of fluid in Paws’ abdomen, but couldn’t exactly identify if the fluid was coming from his heart, lungs, or other organs. But he knew there was something serious going on. He scheduled a Veterinarian Ultrasound Specialist to come and do additional detailed scans, to pinpoint where the fluid was emanating. (Sounds like our myeloma lives, right).

Paws was put on a diuretic and prednisone, to hopefully help drain the fluid and lessen the swelling. Yes, pills, scans, side effects, wondering what’s going on internally… all medical trigger points for me. Thinking how this could be, will be, my future. Thinking about how myeloma eventually affects all our organs, and perhaps what I am witnessing in my beloved dog, will one day be my journey too… Every medical event I have with my animals pushes lots of buttons for me, as I can’t help but project the similarities coming my way, one day.

Days later the ultrasound specialist does detailed scans of Paws, and determines that his liver is terribly diseased and looks like cauliflower, not smooth, as a healthy liver should be. Both doctors consult and agree, “cirrhosis”, or cancer of the liver. Noooooo… We’re all so devastated and shocked. Pawsy is only 8 and half. How can this be! He’s had the best life here. Healthy environment, good food, fresh water, unlimited exercise, and overflowing love. But I had learned that his bio-brother Ranger (below) passed last year from another type of abdominal disease, spleen related, I think cancer too. My friend Terri and I discussed that there must be a genetic link to their much too early passing. We’re both so devastated as these doggies were so special. So loving. So kind. So happy. So irreplaceable…

Sadly Paws went down hill rather quickly. We are still in shock. For most of January he was ok, but slowing down. He would take his pills in treats eagerly up until last week. Dr John came on Friday to drain fluid from his abdomen, and we scheduled another visit for Monday, to do the same. But over the weekend, he lost interest in food. He moved much slower. I knew his body was failing him, and the disease had taken over. Nothing us humans could do at this point, except give him love and comfort. Again, all this triggers so many thoughts and emotions in me. What will my final months, weeks, days be like. What choices will I have or not? I’m not afraid of death, but I do have fears about “how I will die”… We did all we could to make him happy and comfortable. Last Sunday was a beautiful day. We spent the day just “being” with him. Sunday night he had difficulty coming up to the house from the yard. I put a soft mat out for him on the grass, just in case he couldn’t make it up to the house for the night.

Monday we awoke to him with labored breathing, and we knew his time was near. Again, we were shocked how quickly his body failed him. I called Dr John’s office, and he was able to change his schedule to come quickly. Our son’s girlfriend Ashley was with Paws when I went to open the gate for Dr John. Paws took his last breaths then, with Ashley, and when Dr John and I got over to where they were, Paws took his very last breath. He was such an amazing dog. So loving, loyal, happy, silly, playful, joyful, and had never had a bad day in his life, until this. Our hearts are broken, but as we always do, when one passes on, it makes a space for another rescue. Plus we can’t let Abbie be without a big dog partner… there’s a lucky dog out there now, that will be coming to animal paradise soon… Paws will send him soon…

So Tuesday was blood tests. My last labs were the end of December 2017, due to being sick with the flu or awful headcold in early January. It’s been longer than usual not knowing my status, and I am very curious what my IgA, M Protein, SEP, etc will show. My CBCs do show online, and here’s my status from that perspective. And….. yes…. I’m Neutropenic again, as my ANC is .8, so I began several days of Zarxio-Neupogen injections the other day. I don’t feel particularly lousy from my 1.9 WBC, and .8 ANC, but so much is always going on in our lives, that I barely have a chance to feel lousy, unless I’m really really sick, like end of last year, and early January. This Neutropenic crash is from my 21 days of Pomalyst, which I completed on Sunday. So this does make sense, and has happened to me quite a few times since I began the triplet cocktail of Darzalex, Pomalyst, Dex almost exactly a year ago. Nice to be able to connect the dots with side effects. 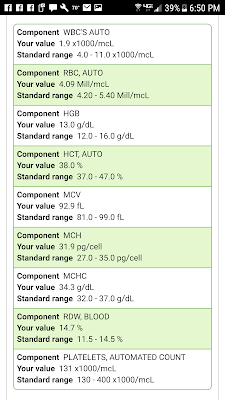 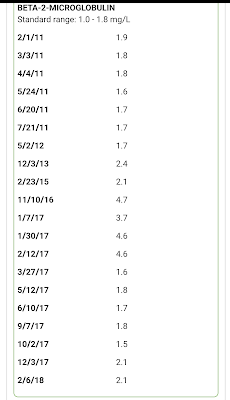 Just look where I was 1 year ago!
Pretty scary!
2.1 for my Beta2 Microglobulin is above the normal range, but it’s holding steady from last month. Steady and Stable is ok with me. When I was diagnosed end of Dec 2009, this level was 4.6, so I’ll take the 2.1 and wait to see what my IgA and M Protein is. I’m thinking of calling my oncology office tomorrow and see if my results are in, and they can release them. My next Dr appointment and Darzalex appointment is this coming Monday, Feb 12, so I will for sure know my status then. Did you want to wait for my next post on Feb 18 for the results, or should I post again before then? :))
Hard to believe  this February 28 is my 1 year anniversary of beginning Darzalex. I’m thrilled and surprised that this triplet of Darza, Pom, Dex is still as effective one year later. I sure hope it will continue to be effective for a long long time, as the side effects are “tolerable”, and I can more or less predict them now, and plan accordingly. When myeloma gets stronger, I hope we can go back to additional Darza infusions per month, rather than changing to another treatment. Ugh, I just “hate” getting used to a new treatment, and wondering what new side effects will attack me. The longer I battle myeloma, the less brave I am, and less bold I am with treatment changes. But I accept my situation, I accept the incurable nature of myeloma, and I will do what I have to do to stay alive.
Hope all well with all of you, and you and your loved ones are avoiding this awful flu season. May love and happiness fill your lives.
Live happy, live well, and make a difference somewhere, somehow,
with someone or something as often as you can!