Skip to content
I am more than these bones. I feel love, I feel alone
Flesh and Bone – Keaton Henson
Day 90 : The indelicate subject of bone marrow biopsy

There’s a small taboo in myeloma circles about talking about bone marrow biopsy. We tend to just brush it off. “It’s not so bad. You get through it”. There are, of course, larger taboos, such as around the meaning of “incurable”, which is somewhere I don’t want to go right now, though brave souls such as Pat Killingsworth do, and I commend them for their frankness (though I find it difficult reading). I’ve decided to post a few times over the next few weeks on taboo subjects. I’ve thought long and hard about this – as an anthropology student I spent a while studying Totem & Taboo, so I don’t go there lightly.

Let’s start with a fairly harmless taboo. You might want to skip this if…
…you’ve had a BMB yourself. You’ll know all this.
…you are about to have your first. It’s not so bad! You’ll get through it! (This isn’t untrue, and sometimes you are better off not dwelling on the future.)
…you are merely squeamish. It’s up to you.

So why write it at all? Quite simply, part of the motivation behind Dial M is that I don’t see why we should keep quiet about all the indignities of myeloma. So I’m not going to. Taboos are, mostly, better honoured in the breaking (except the ones around incest and morris dancing, to mash up several cliches at once).

The only way to get at myeloma directly is to go where it is, in the bone marrow. This is in some ways less accurate than a blood test, since it detects myeloma at one location, rather than throughout the body. But it enables genetic analysis of myeloma cells, and since myeloma can secrete at different levels, it helps to calibrate the blood test readings. My myeloma doesn’t secrete much, compared to most people’s, and there’s some likelihood that as it mutates genetically over time, it will secrete even less, or stop secreting at all.

So, long and short, the docs like to get a sample of the real thing, from time to time. Today was the 4th, for me, in the last year. At King’s there’s a forlorn little room off the side of the therapy unit, especially for BMBs. You can ask to be sedated, but this requires 3 medics, takes much longer, and at King’s it has to take place behind a curtain in the main unit (because the little room is too small). I’ve decided I prefer, on balance, to get it over quickly, in the little room where no-one can hear my moans and my “oh fuck!”s. 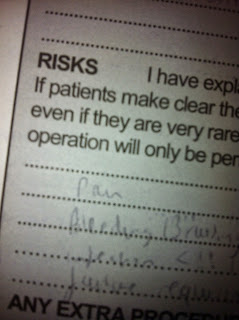 I go in the little room, with a doctor who is in the impossible position of trying to make small talk when we both know what is coming. She goes through the consent form. The main “risk” of BMB is pain. Risk? More like raging certainty. And she (always) makes sure to warn me that one risk is that it might be “unsuccessful” and need to be repeated. Oh joy. Then I sign the form, and lie on the bed, facing the wall, curled in a foetal position, with my trousers slightly lowered, waiting politely to be violated.

I’ve always had my biopsy in my sacrum, which is the triangular bone in your pelvis that attaches the hips to the spine. If you feel round from your hips towards your back, you’ll feel two points of bone, just below the small you your back, either side of your spine. These are the corners of the sacrum. The doctor starts by feeling to find one of them, where she applies local anaesthetic, not just at the surface, but all the way down to the bone. 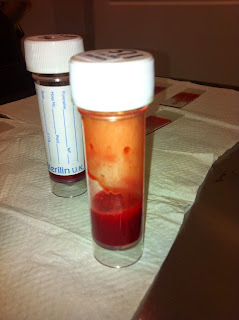 There are two parts of a bone marrow biopsy. First comes the “aspirate”, which involves a needle right into the bone, from which about 5ml of liquid bone marrow is extracted. This is by far the most painful bit of the process, because one can feel the sensation all through the sacrum and down the leg too – like a sharp twang of sciatica. 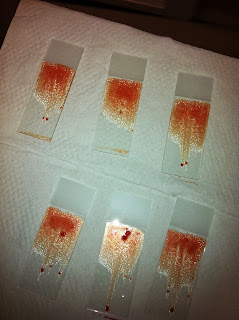 Second is the “trephine” which involves a needle taking a sample of solid bone marrow. This uses an instrument with a cylindrical blade – it is driven into the solid marrow, twisted, and pulled out. This isn’t so much painful as uncomfortable, because it means having one’s bones directly pulled on.

Next, my favourite bit, is the moment when the doctor tells me that my solid sample isn’t very good. Indeed, today, I can feel the trephine slipping as she extracts it, presumably because the site she is extracting it from is full of holes. There follows an entirely unwelcome conversation about myeloma bone disease, and the state of mine, and then the trephine process has to be repeated.

Then, once the bleeding has been stemmed, and a dressing applied, I am able to walk home, and wait for the anaesthetic to wear off.

And that’s it. According to something I read recently, we’re not very objective in our assessment of pain during an experience. We tend to perceive pain as the average of the most painful moment, and the pain at the last moment. And we tend to discount completely the length of time it went on for. As a result, we tend to perceive a very short experience of significant pain, as worse than a very drawn out experience, which may have long periods of high pain, but ends with pain gradually reducing. Part of the fear of BMB, I think, is due to this, because for a moment or two it really hurts, and then it’s over. Ironically, if the doctors spent another half an hour inflicting minor pain, we’d probably view the whole experience so much more favourably. Knowing that little distortion of the mind helps me to grit my teeth through the process. Today’s was a breeze. But then, I’ve had practice.