FL and I have been spending more time in waiting rooms.
I am so very glad I knit. 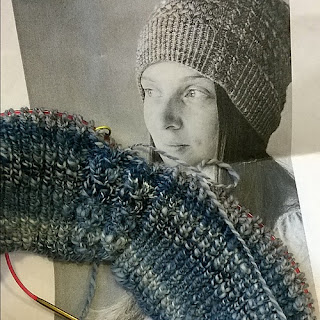 Last week he had a Radiotherapy appointment to try to reduce the pain in his upper arm.
I knitted a hat.
It is the Qwist by Melanie Berg – it is a gorgeous pattern and I plan to knit the matching mitts.

There was a squirm-worthy conversation with the Doctor who asked me if I lived with him or if he lived with me?  Um… we live together.  “Oh!  That’s lovely!” she said.
I was too tired to explain that I thought this was normal behaviour among married couples.
I mean…. ach!
Words fail me sometimes.  The assumptions people make…!

On Monday, we saw the Consultant again.
She spent a long time quizzing FL about his symptoms and staring at her computer screen.
She doesn’t know what to do for the best.
His Freelite score is bobbing up and down around the 160 mark (I am not sure if this is the ratio or the difference between his kappa and lambda – she seems to report it either way.)

The Consultant did not want to risk prescribing Pomalidomide until she was sure that the superdrug was not to blame for his symptoms, so she ordered a bone marrow test for this coming Thursday.
She advised us to wean him off the Gabapentin he has been taking for his nerve pain (post-shingles), as it doesn’t appear to be helping and may be doing harm.

On Tuesday morning, a doctor rang FL at home.
I was at work, stuck in a 3 hour long meeting.
When I came out, I discovered FL had been trying to ring me all morning.  He said the hospital wanted him to come in asap… but he didn’t know why and he had told them it would have to wait til Wednesday because I was in the city and he was home alone on the farm.
I am a Bad Carer!
I tried to contact the hospital but the doctor was not available.  The receptionist said just to bring FL in the next day (today).
At 4.30, a doctor rang me back and said his potassium level had increased significantly and was a cause for concern.
“If he deteriorates overnight, just bring him straight in!”
Thanks.  I feel really great about this.

So we didn’t get much sleep.

Today (Wednesday) we spent 5 hours in the waiting room to be told his potassium had fallen slightly and his kidneys appear to be coping.
So they sent us home again… until tomorrow when he will have his bone marrow test and they will check his blood again while he is there, “just in case”.

Meantime, I had to ask a work colleague to cover a meeting for me at very short notice.
My future role has not been confirmed, despite a polite email to the boss.
Some parts of my job (but not all) have been moved to a different section.
FL thinks I need to read between the lines… 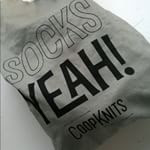 But the good news is that Rachel Coopey has brought out her own line of sock wool, Socks Yeah! You can order it from Purlescence, Suffolk Socks or Meadow Yarn.
I certainly have! :)