Skip to content
I don’t know where the sunbeams end and the starlight begins. It’s all a mystery. To fight is to defend. If it’s not now then tell me when, would be the time that you would stand up and be a man.
Fight test – The Flaming Lips
Day -1 : melphalan chemotherapy 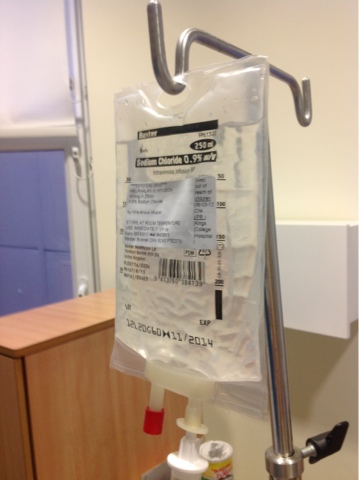 My morning starts very early with blood tests. I discover that the new plumbing means I can just flop all my tubes out and lie there, half asleep. How very civilised. I must look about as interested as a sow sleeping while her piglets suckle, but I don’t care. Once the blood test results are confirmed, the melphalan prescription goes down to the pharmacy. Melphalan is a “nitrogen mustard” – the same family of chemicals as mustard gas. It’s pretty indiscriminate about which cells it kills. So in preparation, to flush my kidneys, I’m given a litre of fluids and a diuretic. Within 30 mins I’m wheeling my drip in and out of the toilet – where I have to pee in a measuring jug and record the quantity each time. At the same time I’m also chewing my way through a large jug of ice, to reduce the blood circulation in my mouth and hopefully reduce the damage there too. I must look pretty bizarre.

As I had anticipated, the actual experience of treatment is relatively underwhelming. It only lasts about 20 mins. But hopefully, that will do for most of my myeloma. Tastes and smells funny, but hasn’t made me feel sick yet. Tomorrow I’ll need my stem cells, to salvage the damage.

To while away the time, I’ve been given this form to complete. I have to record the volume of fluid drunk, and of urine produced. I wonder if they’d like me to puke in my measuring jug too? 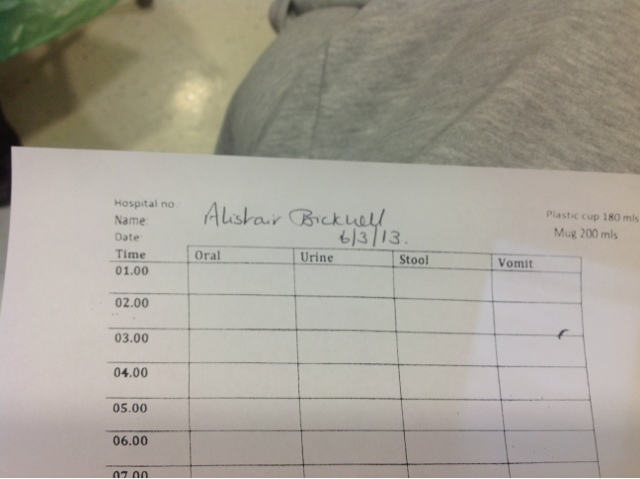