Been a tumultuous couple of weeks but figured I should jot a few things down.

I flew out to Arizona for a surgical strike trip in the middle of the month to meet with my doctor and the transplant coordinator I’ll be working with and check out some places to stay.  Both meetings went well although our dates were off a touch — I’ll be doing pre-transplant workups and stuff for 3 weeks, not the two we had thought, before I get admitted to the hospital.  I start on February 3rd and might not be home until April 15th, which is kind of scary.  Especially since I’m paying out of pocket for lodging for all but 3 weeks of that =/

Checked out a bunch of places to stay and settled on a luxury villa I got a good deal on for the entire month (if you can call $3,500 a month a good deal, but supposedly I do get reimbursed for $2,100 of that).  In the end it won’t be that much more than staying in an extended stay hotel that has a kitchenette in the room (our one requirement) and two bedrooms (Ariana needs her own, mostly for our sanity at night).  Fully furnished, washer/dryer, nice kitchen, pool, etc.  The hotels all just felt cramped and uncomfortable and this felt right.

It’s weird to think of leaving for so long — I’ve been doing odd things, too, like organizing my bookshelves, cleaning up my home office.  As in, in case I don’t come back I want things organized for whoever has to deal with it.

Then again being home is weird lately too.  I’m not really getting over the loss of Mischief well.  I think about him all of the time, and I’ve only now come to realize how truly ingrained he was in my day-to-day life.  I take the plastic safety cover off of a bottle of mouthwash and I hesitate to throw it in the garbage because he would always find those and chew/eat them, and then I realize it doesn’t matter anymore.  I sit on the couch and kick my feet up, waiting for him to jump on my lap, and then it hits me that those days are gone.  The list just goes on and on … checking the closet to see if he snuck in before I closed the door, or the washer/dryer, being afraid to leave a door outside open without blocking it with a foot, etc.

Perhaps it’s better that I just go away for a while … I feel almost like a stranger at home, even with Amy and Ariana there and occupying most of my time.  His absence is just so powerful it’s almost overwhelming at times.  Perhaps that seems silly, but when you don’t have a lot of emotional attachments I guess you just lend those you do have that much more weight. 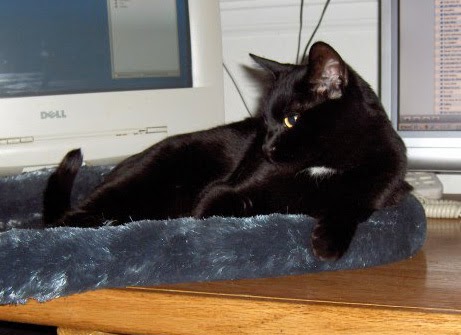 Ariana watched an episode of Diego (Dora-spinoff cartoon) this weekend while Amy was shopping and it had to do with some jungle cat.  At the end she came to my office door and said “where’s my kitty?  Where’s Nischief?”  I told her that Mischief was in kitty Heaven and though he loved her he wasn’t coming back, and she cried.  Me too.

Sometimes life is alltogether too fucking real.  I’ve learned that in spades in the last year.

To add icing to this particularly miserable cake we had to get rid of Trouble too.  A few weeks before Mischief passed she started not using the litter box — I tried everything I could think of  but nothing worked.  She just was so afraid of Amy and Ariana and timid that she’d get emotionally worked up about it.  I put litter boxes upstairs in the guest bedroom where she slept just for her, etc.  Finally a week after Mischief died she pooped in Ariana’s room and that was the final straw.  Hopefully the DFL will be able to find her a home where she’s less stressed — I’m torn up about that loss too, though.  Trouble really was a sweetheart, she was just a typical feral cat.  I think in time, when Ariana had the age and maturity to play with her the right way, that they would have been best friends, but so much for that now. 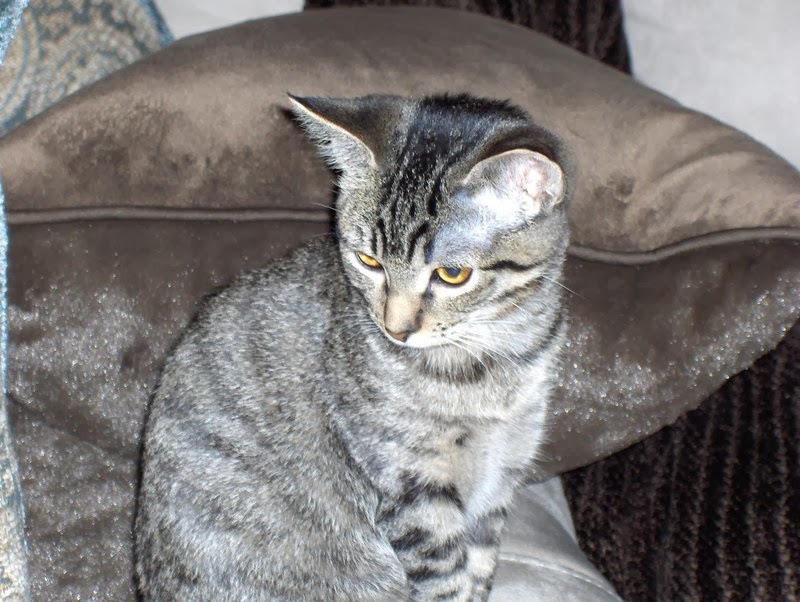 Another balloon hook/tether popped and free, as it were.

We had lunch Saturday with some friends and one mentioned something they read while coping with their own loss of a pet recently.  She said that one of the things people take for granted is how you tend to have physical contact with pets more than anything or anyone else in your life.  How true that is.  I’ve had cats for so long, and so consistently, that everything feels too quiet now and their absence is tangible.  I reach up to pat whoever is camped out on the back of my home office chair, or move my glass so they don’t knock my water over when they jump on my desk, but all I’m answered by is silence and sadness.

I’ve learned a lot about myself in the past six months since this all started.  One thing is that while I use things like video gaming (and poker, back in the day) to escape reality and just “not think,” I used cats to connect to reality but in a safe way.

What do you do when that’s gone?

Next time I write will be from Arizona.  I’ll try to update more, but as of late I’ve been reluctant to outright promise things, even trivial things, like that lately.