Your kind and lovely comments have poured in, and I want to thank you all so very very much.  FL would have raised an eyebrow and smiled a wry smile to read them all. 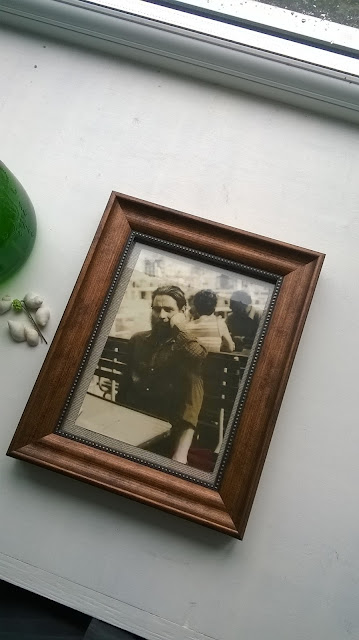 I found this photograph of him from the late 1960’s while I was excavating his desk, in search of vital documents.  Although I did not know him then, it captures him perfectly.
I have framed it and put it by my bedside so I can see him first thing in the morning and last thing at night.

It is so hard, this business of missing him.

You might remember his grand plan to leave his body to medical science?
Unfortunately, when the time came, he was assessed to be “too thin and ill” to be of benefit to students of anatomy.
We did not have another plan.  There had been no need to think about a funeral or a memorial service, as he believed adamantly that The End was The End and he did not want a fuss.  However, he had drawn me a map for his final resting place, for some point in the future, after he had served his educational purpose.
This was rather sooner than expected.

Last Saturday I collected his ashes.
The Boy, a friend from golf (who visited him every evening while FL was in the hospice), the dog and I walked to the highest point on the hill, with a view towards Bennachie.
We buried most of his ashes and planted a tree at the spot.
Hero stood guard.  I know he knew what was happening. 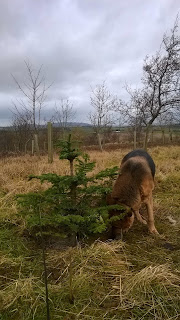 The friend took the remaining ashes to scatter in the woods at the golf club.
At first I was reluctant to allow this, but I thought it through and had to acknowledge that FL did not belong only to me, or to the farm.  He was loved by many and they had just as much right as me to mark his passing, in their own way.
I expect a few drams were drunk in his memory.  He would have liked that.

I need to gather myself.

I have spent the past two weeks on an archaeological dig to uncover essential paperwork in the two rooms he kept as “studies”.  It has been exhausting work, both physically and mentally.  He kept everything… but not in an ordered way.

The Book must have been written a hundred times over the years:  on the backs of envelopes, in a myriad of notebooks, and in no identifiable sequence.  I have no idea if I can salvage it.  I have no idea if I want to.  For now, it is all together in one place.  And that is all I can bear to do.

Today I shut the door of the downstairs study, satisfied that at least I now know what is in there.
There is a diary for every year since 1963.  Oh my.
Some day I might read the letters I wrote to him over the years:  he kept them all.
I need to shelve the books and sort the photographs.
But not right now.

I have started spinning again.
Still knitting Vivid blanket squares.
I am reading and drawing.  I was thinking I might sew something sometime soon.
I need to come back to the present.
I have spent the past two weeks immersed in the past.

I was thinking that I might need to start a new blog.  It feels wrong to carry on in this space without him.  I’ll let you know, I promise.

In his own words, I need to be at peace now.