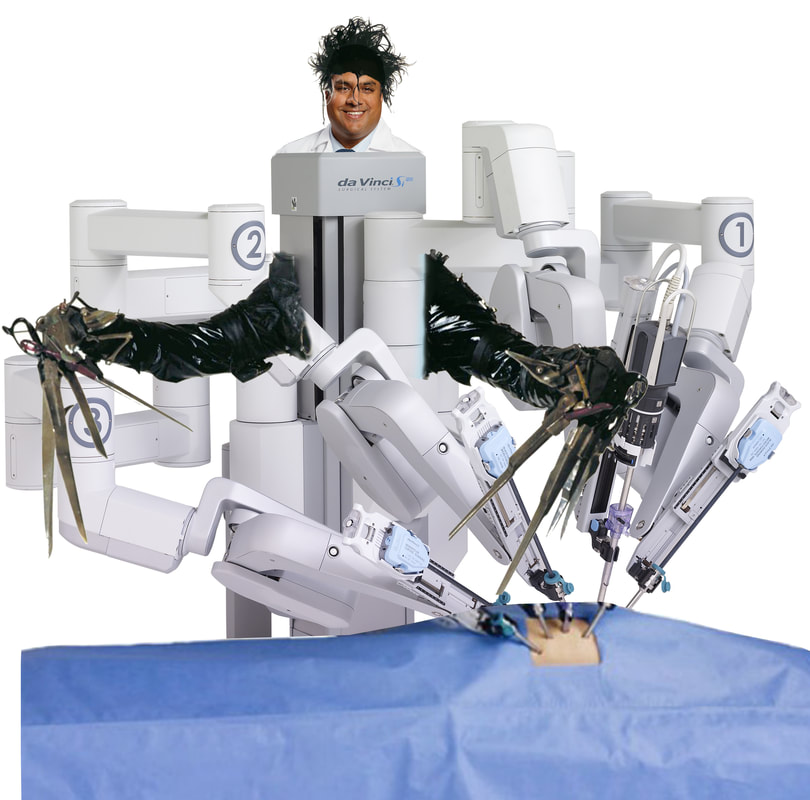 First an update on my kidney tumor removal.  Dr. Katan (Edward Scissorhands) Badani of Mt. Sinai is one of 5 or so doctors in the US who has completed 3000 kidney resection surgeries using the Da Vinci Robotic Surgery.  If practice makes perfect, Dr. Badani should be able to do a kidney resection in his sleep.  That is why I went from Wisconsin to New York for this procedure.  I have chosen, if possible, to never leave a complex disease or procedure in the hands of anyone other than an expert in his field.  So the result,  the tumor was removed with good margins, and initial indications are I have not lost much, if any, kidney function. My daughter Andrea said the doctor indicated the tumor in her words, not his, was “really gnarly”. I will find out after 1 week whether the tumor was malignant, but even if with good margins, Dr. Badani says any cancer is gone.   If you have kidney insufficiency(mine caused by myeloma) this type of tumor is far more likely to develop than if you have normal kidney function. Secondary myeloma cancer, cancer aggravated by myeloma kidney insufficiency, or just chance, who knows?

One  of my major concerns was my kidney function is marginal at best, and surgery could make it even worse, to the point that I would need to resume dialysis. My original diagnosis was multiple myeloma with “end stage renal disease, with a life expectancy of just three months. I spent two years on dialysis, until my kidney function miraculously recovered to the point where I could discontinue it. Typically kidney resection will result in a 20% reduction in function in the affected kidney and 10% reduction overall. This is caused both by the removal of some good kidney tissue so the surgeon can get clean margins and what is known as ischemia time where blood flow is cut off to prevent bleed out during the tumor removal and repair. Doctors try to keep this time down to 10 to 20 minutes, but in 10% to 15% of cases the time is too long and the kidney tissue dies, forcing the removal of the entire organ. Dr. Badani has developed a procedure to cut down on ischemia time, named FAST, which he teaches to other doctors around the world.  Using this process he kept my ischemia time at just under 9 minutes.

The second most exciting development during my visit was Dr. Badani asked me if I wanted to be part of a clinical trial.  Dr. Badani is on a mission to find a way to regenerate kidney function in patients undergoing resection so they lose no function overall.  How is this possible?  In the clinical trial, Dr. Badani is using a material called AmnioFix, which has been to show to have regenerative characteristics in preliminary animal studies and in other areas of surgery and orthopedics. If it proves successful, this development could eventually lead to help for myeloma patients with kidney insufficiency–whether they need kidney resection or not.  The need is critical since we usually can’t be approved for kidney transplants or are pushed low down on the priority list. The clinical trial has 45 pages and I did a little cut and past to provide a peak into it (It isn’t posted yet on clinicaltrial.gov:

Onset chronic kidney disease (CKD) is a significant risk associated with radical nephrectomy as a treatment for renal cell carcinoma.[1 2] PN is a safe alternative for the treatment of renal cell carcinoma (RCC) that mitigates this risk.[3] While PN reduces the risk of CKD, PN does result in a reduction in renal function. In a literature review of the etiology and prevention of renal function decline following PN, Mir and colleagues found that within the first few weeks to several months following PN, estimated glomerular filtration rates on average in the operated kidney are reduced by 20% and in patients with two kidneys, global kidney function is reduced by 10%.[4] After this period of renal function decline following PN (~first 3 months), renal function is maintained constantly.[5]
A primary determinant in the loss of renal function following PN is a loss of renal parenchymal volume associated with the procedure. Specifically, loss of renal parenchymal volume during PN results from excision of the tumor and surrounding tissue to avoid positive surgical margins in addition to renal tissue necrosis resulting from damage associated with reconstruction of the kidney. Results from seven series demonstrate that the median percentage of parenchymal volume lost from PN is 17% (Range: 10-21.4%).[6-13] These studies furthermore demonstrate that the loss of renal parenchymal volume is the strongest and most significant predictor of reduced renal function following PN. [6,9,10] In a study by Lane and colleagues, it was found that when controlled for surgical factors (e.g., ischemia time, blood loss), tumor factors (e.g., size, interpolar location) and patient factors (e.g., age, gender, preoperative GFR) every 10% of renal parenchyma spared increased GFR by 0.89 ml per minute per 1.73m2.[7] In a similar study controlled for age, BMI tumor location, tumor size, operative method (laparoscopic, open), protuberancy and warm ischemia time, Song et al. found that for every 1% reduction in renal parenchymal volume, postoperative GFR decreased by .95 ml per minute per 1.73m2.11 Thompson et al. also found that for every 5% increase in renal parenchyma volume preserved, risk of de novo stage IV CKD decreased by 17% when controlled for preoperative GFR and warm ischemia time.[12]
In summary, AmnioFix®’s anti-inflammatory, anti-scarring, regenerating and healing properties have been evidenced in its ability to facilitate recovery of the neurovascular bundle following radical prostatectomy. We hope to further expand on these findings by extending the use of AmnioFix® to the regeneration of renal parenchymal volume with the goal of recovering lost renal function resulting from PN. A randomized trial is necessary to understand whether AmnioFix® can be used to treat renal insufficiencies and a damaged renal parenchyma.

To think we could regenerate kidney function may be as outlandish as to consider myeloma to one day be curable.  I am just thankful there are doctors like Dr. Badani who dare to challenge the impossible, and make it possible.