My brother-in-law works for the weekly paper where we had Andre’s obituary notice published. It was also mentioned in a roadracing magazine. We are planning a secular memorial service (celebration of his life seems to be the better term) in Dallas, Texas, next Saturday, August 8, a day before my birthday.

To all who sent me condolences, words of support, and their fondest memories of Andre, I want to thank you from the bottom of my heart. Take care of one another.

Andre died today in my arms. He was handsome until his very last breath. I’ve thanked him for the 9 wonderful years we’ve spent and for making me happy. I love him so much and I’m going to miss him dearly.

28 days. Andre has been on the ventilator and in the ICU for 28 days.

Today is probably the lowest I’ve felt since the initial diagnosis, and my heart is close to breaking. I know I’ll catch my bearing again to take better care of Andre and my other responsibilities but the road ahead just feels so much lonelier.

He had an MRI and a lumbar puncture two days ago to check if there is anything wrong with his nervous system that can explain his lack of lucidity and constant agitation. The results all came back negative. The only thing left to do clinically is to continue dialing down the sedative, pain meds and other medications that can cloud his mind, and hope that he comes out of it. And when he does, I’ll be the first one he’ll see.

Roobeedoo, Spiritwoman, and Andre’s weekend doc all suggested that playing music might help Andre relax. My initial notion was that silence is best in not agitating him. It seems I’m wrong. I started with classical music to relax Andre but he seems to get excited every time a piece reaches its crescendo. New age seems to be the same. I ended up sticking to ballads and “lite rock”–it looks to be just right.

For this weekend, I had to pushed the doctors to be more aggressive with getting Andre off sedation (i.e., lowering the Versed they’re infusing into him). They and the nurses seem to be trigger happy with bolusing him with the sedative every time he “wakes up” fidgeting. I can understand their concern about alleviating the discomfort of their patients but in Andre’s case, their usual methods have only resulted in him being more despondent. Additionally, I’ve noticed that the nurses are quick to give sedation because it makes their job easier. I had to convinced them to give Andre several minutes to calm himself down every time he “wakes up” by gently explaining to him where he is at, what’s going on, and what he needs to do. I know this works because I’ve done this several times. Doing this over the weekend, we’ve managed to cut his Versed level by a quarter.

Andre made and answered several requests this weekend during those intermittent minutes of cognition. He’s able to answer simple questions (e.g., are you in pain, are you hot, are you cold, etc.?) and to give me kisses. He appreciated my trimming of his facial hair and cleaning his ears (he was able to indicate that his ears were itchy). He was also able to signal to us if there is something that’s making him uncomfortable (e.g., having to pee, having a bowel movement, the telemetry electrodes and wires digging on his back, etc.). I’m taking all of these as signs of progress. I hope it continues in the right direction.

I’m back in Seattle after being in Vancouver since Wednesday afternoon. I’ve kept up on Andre’s progress by calling the nurses at least three times a day, but the day nurse today was quite thoughtful. She called me an hour before the end of her shift to tell me about Andre’s progress. He’s been breathing on his own (with pressure support from the ventilator) since 9 AM this morning. The respiratory therapist had just put him back on the ventilator at 8:30 PM to rest him for the night. The remaining issue is still the level of his sedation. He’s still being kept quiet most of the day. I hope tomorrow they’ll go back lowering the sedation while he’s breathing on his own.

Andre was completely sedated when I came this morning. I had another “incident” with a physician today, this time with the new attending oncology doc. It seems I’m losing my patience so I need to just calm down just like what I tell Andre.

Completely asleep but with titered down sedation, they put him on pressure support ventilation at about 10:30 AM. He started stirring half-an-hour later and bingo!–he went into his usual agitated state. I don’t know what else to do and it seems the pulmonary & critical care team are also running out of ideas. I heard them say, “maybe we can ask psychiatry if they can help”. Argh!

And on a different note, I need to go back to Canada to deal with some personal and work-related issues. My work has been very understanding of our current situation but I do feel the need to get more work done since I’m technically not on a leave-of-absence.

Monday and Tuesday are very similar days to a degree.

They started weaning Andre off the sedatives and he responded with differing degrees of agitation. The biggest battle is always when he’s waking up from sedation and sleep in the mornings. He would shake his entire body, breathe rapidly, increase his blood pressure and heart rate, have V-tachs and SVTs, and pull off everything that’s attached to him–the electrical leads, the feeding tube, and the breathing tube attached to his tracheotomy tube. He managed to remove the breathing tube on Monday morning so the nurse had to put him on restraints which was very difficult to witness. I hope Andre doesn’t hate me for allowing that since it was done with the best intentions.

Tuesday was worse than Monday in terms of his agitation. To make matters worse, Andre has a new pulmonary & critical care fellow in-charge of his care. During Andre’s most agitated state which occured at about 12:30 PM, she ordered a couple of tests that I didn’t agree with–an arterial blood gas and a chest X-ray. The nurse also questioned the orders but only to me. I had a problem with the arterial blood gas because it’s a more painful process than a simple venipuncture (they have to go deeper with the needle to reach an artery) which can increase Andre’s discomfort. They also haven’t done arterial blood gas measurements on him for at least two weeks since they took out his art-line, and his venous gas level has been a good enough estimate of how well his gas exchange is doing. In fact, they’ve been doing only venous gas level measurements on him everyday for the last two weeks through his central line–a process that is painless and non-invasive. The fellow’s defense of the going the arterial route is that she wants to look at his O2 level even though she admitted that she is more interested in the blood CO2 and pH, two numbers that can accurately be derived from the venous blood. I pointed out to her that Andre never had any problems with his O2 level and that the O2 sensor attached to him 24/7 had never indicated any issue with his O2 saturation. My problem with the chest X-ray is that they’ve just X-rayed Andre in the morning (in fact, he gets this every morning) and doesn’t need the extra radiation exposure since the “respiratory event” that she’s so worried about is clearly agitation induced and nothing out of the extraordinary. She would have found this out if she had talked to me, listened to the nurse, or have read his charts. They did do the second X-ray of the day and as I expected, it came back with clean results. She also would not listen to the nurse when told that Andre required some bolus of sedatives throughout the day to maintain his calmness.

It took calling the attending doctor to finally let the nurse give Andre more sedation to rest him for tomorrow. They’ve taken off several sedatives/pain meds for the rest of the day so they can “re-boot” on how they’re balancing Andre’s pain and agitation with his wakefulness.

The good thing about these last couple of days is that when Andre is calm and semi-awake, he manages to communicate with me and the staff. He kisses me when I ask for them (although at one point, he withheld his kiss when I apparently pissed him off for not understanding the words that he was mouthing and I kept shouting at him to calm down and control his breathing). He’s able to tell us if he’s in pain and if he wants to be turned. He also understood the news about Ben Spies, Sarah Palin, and Michael Jackson (I don’t know though if he’ll remember them). The funniest thing that Andre did was when he gave a sarcastic smile to his nurse who gave him high praises for being able to dangle his feet off his bed during physical therapy. It was classic Andre.

I want to update Andre on “newsworthy” events he missed while he was recovering from his surgery on June 18.

I’m sure there is some motorcycle racing news I’m missing. If someone can fill me on on that one, I’d appreciate it.

There isn’t much to report on Andre from yesterday, July 4th. His medical team had started tapering off his sedation. They did a CT scan of his chest to look at the infection in his lungs. And they started him on what they call “pressure support” ventilation during daytime. At night, he back on full ventilator support.

Today, the CT scan result shows nothing significant. There is no spreading or enlarging of the remaining small nodules in his lungs. His white blood counts have also improved a lot so that should help with fighting the infections. He’s awake right now, and able to nod and shake his head to respond to questions, he mouths words and tries to get up–all good signs.

Exactly 1 year ago, Andre and I celebrated our 8th year anniversary by getting married in Vancouver, Canada. 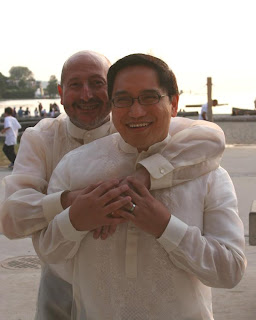 Today, we’re celebrating it quietly in his hospital room–no fanfare, just whispers of encouragement and love, and tender caresses to remind us that we’ll always be there for each other.