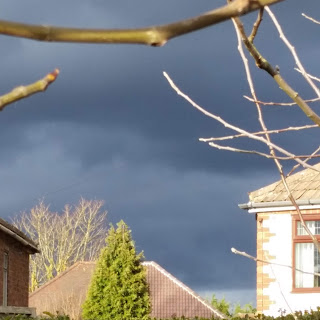 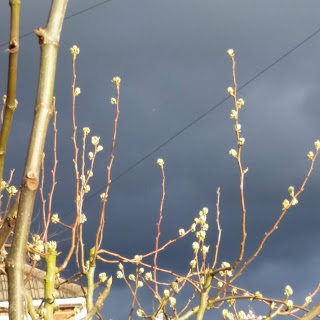 This afternoon’s sky just about summed up my mood. As hard as I tried, I just couldn’t find the daily small moment of joy that has kept me going. A flower, a bird, a funny moment, all escaped me. Like all things this mood will pass. Like the moments of panic, when I am scared I will never cope with life alone, until I remember I coped perfectly well with five children and no man, that I coped when Mike was in hospital and bed bound for a month when he did come out.

In my head I hear all the cliches that people are prone to recite at such times. I will survive, I will get through this, I will learn to live with the grief, I will find happiness again.

Mike and I are both coping really well under the circumstances, we are still trying to get a few things sorted.

So a quick update on what has happened over the last week, apart from the arrival of oxygen. We had a visit from a nurse from the local hospice who in turn referred us to the district nurse. The district nurse came on Saturday and had a long chat with Mike while he was doing his dialysis. He said the team would visit Mike weekly, but Mike said there wasn’t really any need for that at the moment so they will be calling him weekly instead until such a time as Mike needs them.

At least I now have a couple of numbers that I can call should I need help, although I’m still a bit in the dark as to what exactly I should call them for. The limbo on that front continues. The hospice nurse asked me how I was feeling about it all, and all I could say was that I was used to the idea. I’m not happy about it, but I am resigned to it.

Mike is using his time to sort out as many things as he can. He has a builder coming on Thursday to replace the doors he took off many months ago (it has been really strange having no door to hide things behind.) He has arranged to have a greenhouse delivered and installed as he thinks it will make me happy, he wants to leave me knowing I am pottering in the garden and growing my own food. He keeps trying to tell me what to do with myself when he has gone, and I keep telling him I will need some time to work things out for myself. I don’t want to be rushing into bad decisions just because I am grieving.

We still laugh at things and I still cry. We’re generally happy in each other’s company and I’m spending as much time as I can with him, the housework can wait. 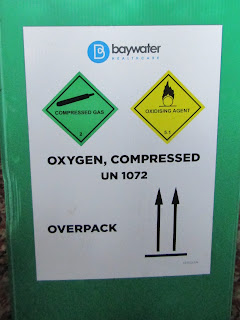 Nothing much has changed. The slow decline continues.

I find that I am suddenly hit by moments of intense grief, often unexpectedly or at the oddest moments. The other day it was while making the morning coffee, the cafetiere is built for two and the realisation that it will be too big for one was too much to bear. Watching TV and films naturally have me in tears when romance is on the cards, my lover died months ago and I grieve for that part of Mike every day.

We have long talks about death, about whether the knowing and the preparation make it easier or whether a short, quick end is preferable as the pain of loss is concentrated on the moment. Neither is easy, at the moment it would be easier for me for it to be all over with, but at the same time I can appreciate the time we have had to say our goodbyes.

It is all so tiring.

As you will all have realised I didn’t do a week three update. There was nothing new to say. There still isn’t anything to say this week other than Mike says he is getting more and more tired as time goes by.

All seems well each morning as he sits in bed drinking his coffee. All is well until he actually tries to get out of bed. The process of actually getting up and getting dressed takes about an hour, there is a lot of stopping and starting.

The days are spent sitting. The walk to trip to the car wears him out. He can no longer leave the car to even put fuel in it, I have to do it for him. I do 99.9% of stuff now.

Mike is pretty much the same, but I went down with a bad cold on Wednesday, which doesn’t help when you are trying to take care of someone else almost 24/7. I am feeling slightly better today, the nose is still bunged up and I have a cough, but my energy levels are improved.

We saw Dr. B. for the last time on Thursday, (that in itself deserves a separate entry), the results of the bone marrow aspirate showed that the cells that produce the platelets are reduced and that there is some dysplasia resulting in reduced red cell production too. The good news was that there is no myeloma, so it is merely the side effects of treatment that are causing Mike’s ill health. In my opinion it is still ultimately the myeloma that has lead us to the situation we now find ourselves in. Without the harsh chemo and gruelling  second SCT Mike would still have a relatively health heart and lungs that worked. There is nothing to be done and no point in being bitter. So we are continuing to try and make the most of the time we still have, that’s when Mike can stay awake long enough. :)

I thought I would update the blog so everyone knows what’s going on. Mike was only in hospital Monday night. They drained his chest on the Tuesday after which he decided he wanted to be at home. The doctors tried to argue with him, but the reality, whether we like it or not, is that the nursing staff just haven’t the time or possibly inclination, to be constantly checking up on people. Mike doesn’t like being left alone in a side room for eight hours at a time, unable to walk further than the bathroom and with nothing to occupy him other than four blank walls. No TV, no radio, a newspaper that he has finished reading. They couldn’t say where the infection was, it wasn’t his chest as that had been x-rayed, Mike reckons it was more to do with the eye infection he had been suffering from for a month. At home he is comfortable, gets fed when he asks, and has me running around after him.

Amidst all the sadness however we do still have moments of laughter. On Friday Mike went to see a funeral director to get a quote and begin to sort out what he wants. While we were sitting there Mike said that the one thing he regretted was not being able to get to Australia. The lady said that it was possible, if I take his ashes to her and get them officially sealed, I will be given special paperwork which will allow them to be taken through customs. I can take him with me. So at some point we will be going to Australia, with Mike in my luggage, that’s one way to save on airfares! Mike says I must take photos of him while I’m there.

The last few days have been a bit tricky. Mike ended his birthday by calling an ambulance as he couldn’t breathe. He had already discovered that his HB had been 8.5 (85) the day before and he reasoned that was the cause of his problems. As it was almost midnight, Mike went off to the hospital alone. It took him over seven hours to convince them he needed a transfusion, but they eventually gave in. After the transfusion he was discharged and safely back in his own bed by Saturday evening.

Today he was due into the day case for his immunoglobulins so we were up at 3 a.m. to set up the dialysis machine and get the process over before the appointed time. I duly delivered him to day case on time and made the 20 minute walk home. It was while I was walking Toni that I got a call to say they were admitting him, his breathlessness was a real concern and his infection markers were up. I rushed over with his night clothes etc. only to find him on oxygen, arguing that he didn’t want to die in hospital.

I won’t bore with you with all the back and forth discussions, needless to say  Mike is now on ward, but only after he got his DNR, the last thing he wants is to find himself with an infection on ICU, unable to say no more please. To be honest, every time he goes into hospital he catches something, he even got Norovirus when he went in for his bone marrow biopsy. Tomorrow they will give him platelets, and drain his chest again. The hope is that Mike will gain enough time to sort out the loose ends that are bothering him.

Tomorrow is Mike’s birthday. His health will stop him celebrating as he once would have, but I will definitely be celebrating the day that my gorgeous husband was born. I can have a drink for us both!

I am having a bad day. Even before Mike starting discussing his funeral plans I was emotional and tearful. I have been spending too much time looking at old photographs of Mike, photos taken just after we met, photos of holidays together, photos of our wedding. Time takes its toll on us all, but the it isn’t just time that has stolen away his youthful appearance. Mike is a shadow of himself both physically and mentally. He no longer laughs the way he once did, he doesn’t laugh at all. He no longer says he loves me, he can barely look at me these days. I can read the anger and frustration in his face, he has every right to be cross with life, I just wish that anger didn’t spill over onto me.

A question to you all. Should I continue to write this blog detailing the last few months or should I leave it unfinished?