After I posted about my box-recycling trauma yesterday, I got a comment suggesting that I find a box filled with junk, clean out the junk, and then use that box to mail the First Communion dress to my sister. That was brilliant! So I searched the basement for a junk-filled box and found one that was the perfect size. When I opened it, I discovered that all it contained was … another box.

The good news is, I was able to use the outside box to mail the dress. The bad news is, I am unable to throw away the inside box for sentimental and safety reasons. It’s the box that WCK’s American Girl doll was packaged in when she got it for Christmas a few years ago. WCK’s American Girl doll is named Francine, and she is part of our family. Francine has more clothing and possessions than many real children in some parts of the world. Jay and I are a little afraid that Francine is going to come to life in the night and murder us, so I don’t want to anger Francine by throwing away her box.

In fact, one night last fall, Jay returned home to a dark house, knowing that WCK and I were both away at WCK’s swimming lesson. Imagine how scary it was when he turned on the light and discovered someone sitting on the couch:

After he finished having a heart attack, he realized that it was, in fact, Francine, and he texted me the above photo to show how scary it was. Yeah, that’s pretty dang scary.

And so, WCK now has an extra box in her room, because we don’t want to anger Francine. It’s for the best.

A couple of days ago, I saw a Facebook post about the 40 Bags in 40 Days Challenge. The goal is to declutter one area of your home every day during the 40 days of Lent. I was intrigued because our house is a teeny bit horribly cluttered. In fact, at the beginning of the year I told Jay my goal for 2014 was to organize the house, and he just laughed.

“I’LL SHOW HIM!” I thought. For about two seconds. And then I proceeded to do zero cleaning. I mean, Donnie Wahlberg has a reality show now, and all those episodes aren’t going to watch themselves. I need to focus on my priorities.

But when I learned about this challenge, I thought maybe it could work for me. There is a chart you can download and print, and then you write down what you did each day. I am all about filling out charts and checking things off. This is the only reason I am able to run long-distance races. I cannot bear the thought of not doing what the training plan tells me to do. If a chart tells me to do something, I will do it.

But now I am on Day Two of the challenge, and I know why I never throw anything away.

Yesterday, I tried to throw away some old t-shirts. It did not go well. I will blog about this in a future post, because it is a long and traumatic story. It’s a story that requires photos. I still ended up with one trash bag of clothes to take to the Goodwill, so I met the Day One goal and was able to check it off the chart. Whew.

Today I thought I’d tackle all of the empty cardboard boxes I have stashed away in closets and in the laundry room. As I’ve mentioned before, I am a bit of a box hoarder. “You never know when you are going to need a box,” is my motto. I decided to ignore this highly practical motto, found twelve (twelve!) empty boxes, ripped them all apart, stuck them in the recycling bin, and then checked it off the chart. La, la, la!

Two seconds after throwing out all of the boxes, I remembered that I need to mail WCK’s First Communion dress to my sister in Illinois, and at least two of the boxes I threw out would have been the perfect size for this. Now I have no boxes. None.

See? SEE? This is why I never throw anything away.

Now my niece is going to be naked on her First Communion, and she will grow up to be a serial killer, and it is all the fault of the 40 Bags in 40 Days Challenge. She will do an interview with the cryogenically frozen head of Barbara Walters via Skype from her prison cell, and she will tell Barbara how she used to be a sweet, cute, wonderful little girl until the day Aunt Karen threw away all of the boxes.

And Barbara Walters’ head will judge me.

And WCK will be in the next prison cell over, all because of the time she returned home from school on March 6, 2014 and announced that she needed a shoe box for a diorama project that is 99 percent of her grade, and her mother didn’t have one, so she flunked out of the third grade and turned to a life of crime.

Nothing good ever comes from cleaning, but I’m going to continue this life-destroying challenge because the chart won’t let me quit. Dang you, chart!

I’ve been away for a while — AGAIN — but I’m back now and happy to say that my M-spike is still completely stable at 1.4. Everything is awesome!

I’ve been away from the blog again for way too long, and for no good reason. I’m still alive, still healthy, and training for three half marathons this spring. I’m happy to report that my M-spike is completely stable at 1.4, and that’s even after my Revlimid dose was reduced to 10 mg.

That means the Revlimid is 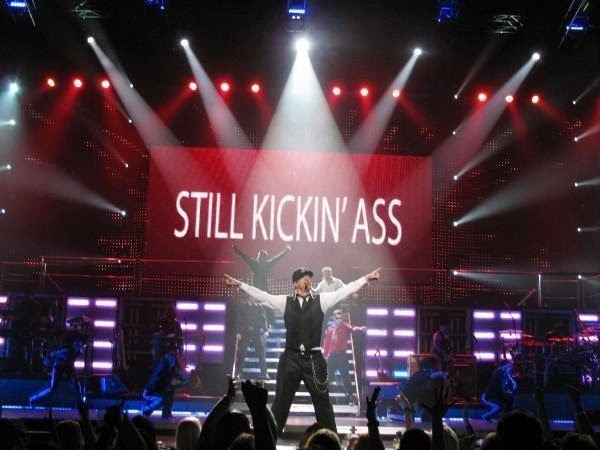 I’m back on the blog, after realizing I forgot to post my latest M-spike update. If you’re one of those who is interested in my M-spike updates, you’ll remember that a few months ago, the lab didn’t include my M-spike number with the rest of my results. That happened again, so I don’t know what it is; however, they did check my IgG, which came back exactly the same as last month. The nurse was pretty impressed about how stable my IgG is, because usually IgG fluctuates all the time. The IgG measurement also includes healthy protein, while the M-spike number is only bad protein. I don’t remember the exact number (am I slipping in my blood-numbers obsession?), but it’s somewhere in the 1,600s, which is at the high end of normal. Anyway, that probably means my M-spike is totally stable, too. Yay!

Other exciting news: My CBC, while still not entirely normal, looked better than it had in yeaaaaars, and my dose of Revlimid has been reduced to 10 mg. I’d been on 15 mg for over a year (and 20 mg for over a year before that, and 25 mg for about six months before that). We’re just going to see how the 10 mg works out. I’ll find out in a few weeks.

I was looking for a photo to go with this post that would celebrate the 10 mg of Revlimid, when I remembered that NKOTB’s latest album is called “10”. Coincidence??!?!?!?! Well, probably, but at least I can celebrate with a video.

You don’t have to admit that you watched it. It is pretty awesome, though.

I’m a little late in posting my test results from last week. My M-spike came back at 1.4, which I was pleased with, because it’s completely stable from the month before. Then the nurse told me that it is actually better:  The new lab is now using two decimal places, so last month my M-spike was officially 1.48, and now it is 1.41. I improved by .07. I’m sure .07 doesn’t really matter in the grand scheme of M-spikes, but I’ll still take time to enjoy it.

Also, my beta-2 microglobulin and IgG both slightly improved, so that’s good, too.

I won’t have another test until after Christmas, so now I can take the time to think about important holiday things, such as this: Why don’t I have my own Bon Jovi-themed Christmas stocking like this one I found on Etsy? Why? 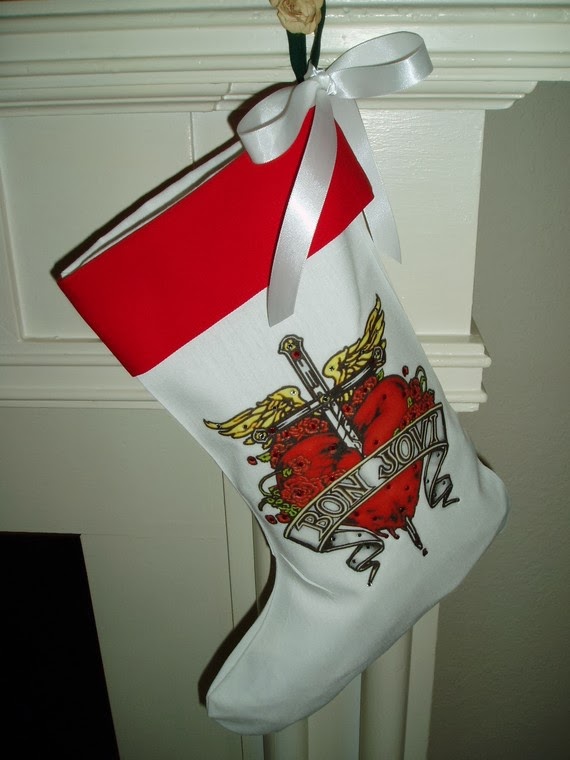 Yay! I did it! I blogged every day in November! It’s time for me to sit back and wait for all of the prizes to roll in. In the meantime, let us celebrate the end of NaBloPoMo and the beginning of the Christmas season with a touching scene from “A Very Brady Christmas”.

No, that’s not the real Cindy.

Then they have emotional problems brought on by the traumatic events, which causes them to have even more dramatic affairs.

It’s like ER, only super trashy and extra traumatizing. I enjoy it.

I just started watching season nine, in which one of the doctors, recently traumatized by a dramatic plane crash and fleeing her estranged husband who recently had an affair, gets a job at “The Clinic” in Rochester, Minnesota. Apparently, legal reasons keep them from coming out and calling it “The Mayo Clinic”. They do show some exterior shots of the real Rochester, but everything that has to do with the actual clinic — while it does look very similar —  is fake. I found a photo of the Grey’s Anatomy version of “The Clinic”. Note the sign above the door: 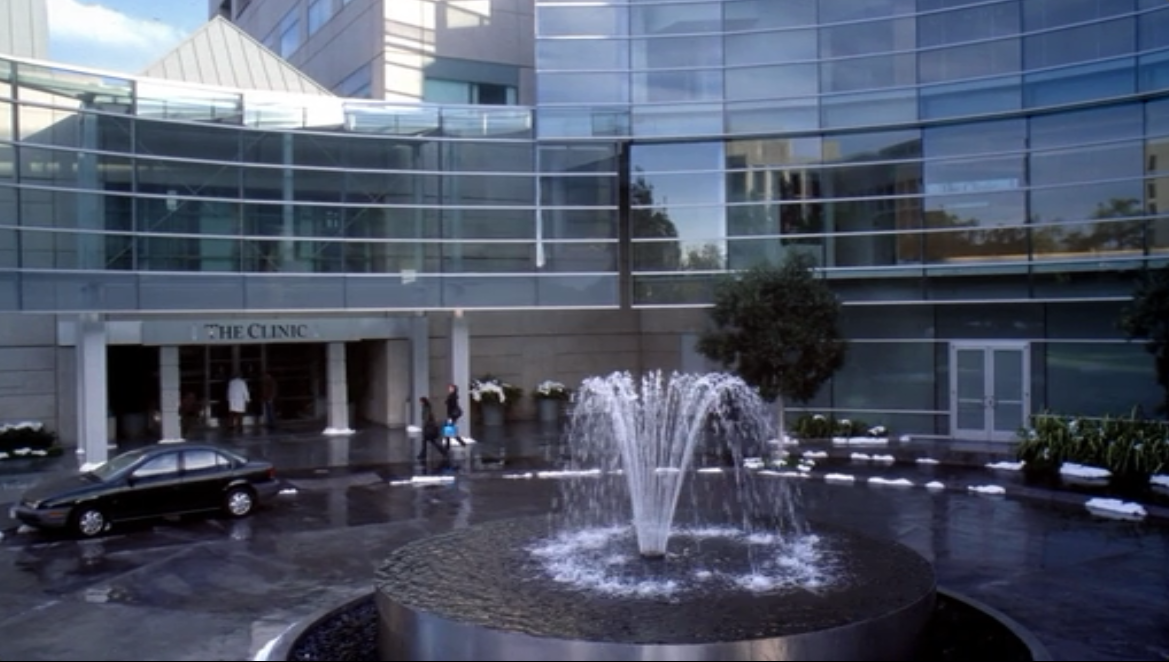 I’m only a few episodes in, but I don’t think this doctor is going to last long at “The Clinic”. All of the doctors there are portrayed as old and lame and too polite to create much drama. They say things like, “You need some R and R. Why don’t you go to The Mall of America and ride the roller coaster?”

They actually showed a patient receiving a tater tot hot dish from his family, and they used the words “tater tot hot dish” repeatedly, so that we’d all know the show’s writers had done a lot of research on Minnesota.

Granted, one of “The Clinic” doctors did collapse and die of a heart attack right in the middle of a surgery (because he was so old, and perhaps had been eating tater tots), but it’s not like he had a bomb strapped to his chest and exploded the entire OR. Back in Seattle, the entire OR would have exploded, and the survivors would have had affairs right there in the rubble.

Apparently, Grey’s Anatomy is trying to tell us that the doctors at Mayo are calm, polite, reasonable enjoyers of tater tots who die quietly and are unlikely to be involved in dramatic bomb scares and/or affairs. This is exactly why I trust “The Clinic” with my medical care.

Remember the Macy’s Thanksgiving Day parade of 1989? No? Then click on this video and prepare to be transported back to a simpler time. For this video, I am truly thankful. Amen.

Today’s post is another short one: My latest Myeloma Mom column has been posted on the Myeloma Beacon web site.  It’s about the six-year anniversary of my stem cell harvest at the Mayo Clinic. It’s hard to believe it’s been six years, and all of my little cells are still up in Minnesota, chilling on ice. Anyway, it’s all in the column, so go check it out!