Skip to content
What a great night!! On December 10th, McHales on Main served as host for our very first Southern Pearl Cancer Kicker Benefit. Four local bands donated their time for a night of awesome music. Ryan Lewis kicked off the night with his acoustic guitar followed by Fernandina and Bad Elster. Motel Glory wrapped up our event by rocking the house to end the evening. 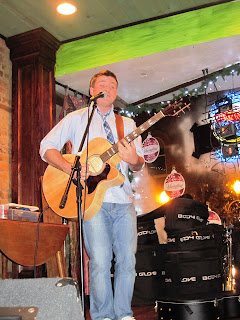 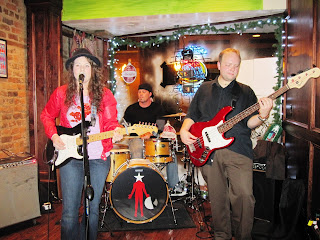 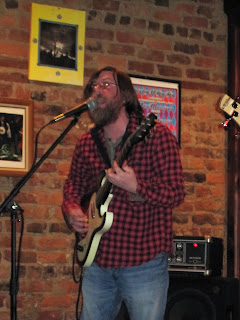 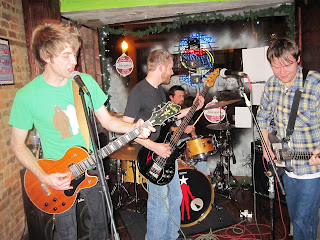 Through door donations, a 50/50 raffle, prize raffle, and Premier’s 50% match program we were able to raise $1357.50. All of which went directly to the Cancer Kicker Fund at the University of Michigan Comprehensive Cancer Center! 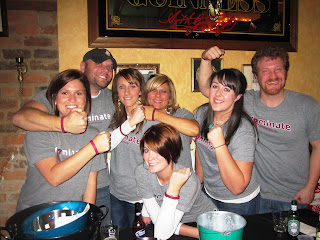 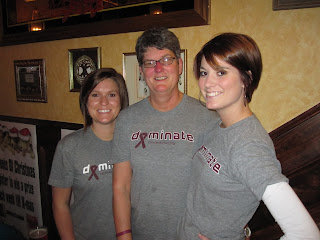 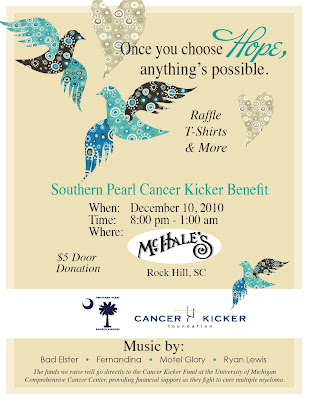 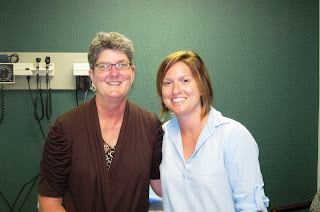 It’s a special Thanksgiving for us this year. We have quite a bit to be thankful for.

We’ve been trying to get back to normal around here. It seems like I have been on the road for work since we were discharged. Momma is recovering at home and doing great. She still can’t be out in large crowds. She’s been keeping herself busy organizing kitchen cabinets. We’ll return to Greenville in late January for her 100 day evaluation. They’ll determine at that time what the next steps will be — maintenance chemo or a second transplant. We’re ready to take on either! Happy Thanksgiving!

We’ve officially been discharged. More details tomorrow. Is it possible to forget what your forks look like in 8 weeks? Apparently so. 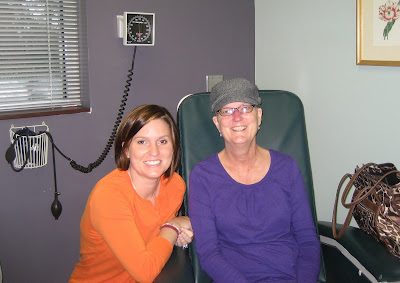 Today was one of those days where you know when your head hits the pillow you’ll take a huge sigh and realize exactly how amazing the day really was.

Our day started at 4:30 am after a night of crazy heartburn, parking lot fights, and hardly any sleep. Momma loaded up on a few preventative meds hoping Ativan and Lomotil would prevent any potential flight disturbances. We made our way to the Anderson civic center in the dark, got checked in and waited on our balloon pilot to come find us. We were greeted by our pilot Wayne’s mom and made our way over to watch Rosie get ready for take off. 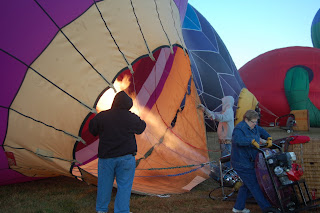 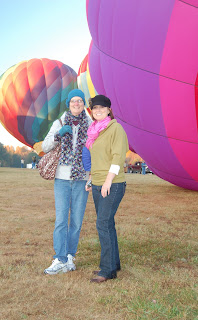 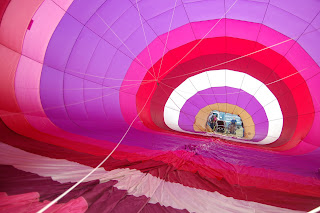 Wayne briefed us on what to expect during the flight and the landing. We signed a forest of documents that reminded us over and over that ballooning is “inherently dangerous”. Not much different than the pre-transplant documents Momma signed that said “oh by the way, your transplant might not work and you could possibly kick the bucket”. We’re all about taking risks around here.

The balloon was ready for take off so we hopped in the basket and Wayne’s mom snapped a quick photo of us before take off. 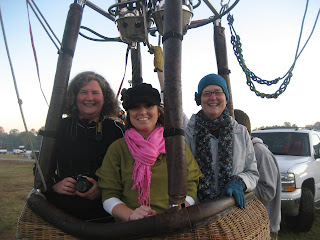 The take off was really smooth and we were quickly high above the trees. Lib was wishing she wouldn’t have passed up an Ativan around this time but she settled in after about 15 minutes.

A few shots from the air. 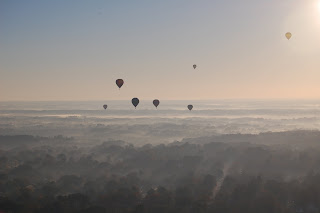 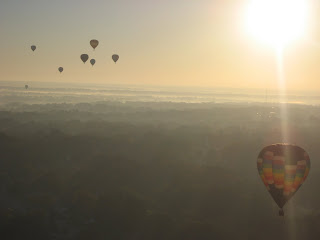 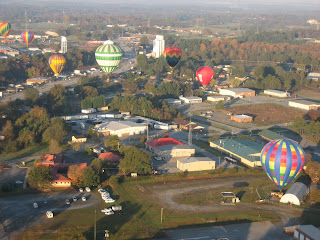 We stayed in the air for about an hour and 15 minutes before landing in a paved entrance to an Anderson neighborhood. The landing was alot easier than I was expecting — well after avoiding a set of power lines that Wayne didn’t seem to see at first. After Wayne and the chase crew got Rosie stuffed back into her bag they asked us to help get the rest of the air out of her. 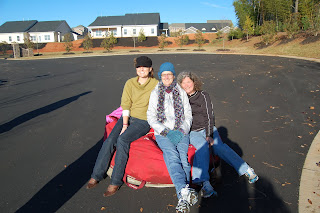 We loaded in the chase car and made our way back to the launch field for a champagne toast. Today was a great day — a memory that I’ll hold on to forever. Thanks to Wayne and his crew for an amazing morning. 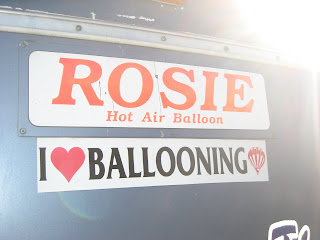 Liver enzyme levels are still elevated but much better than they have been. The transplant nurse still has us scheduled for discharge on Tuesday!
We’re planning to check out the Greenville Open Studios event tomorrow and going on a sunrise hot air balloon ride at the Balloons Over Anderson festival on Sunday. Great way to wrap up our stint in Greenville!

There’s a light at the end of the tunnel and we’re getting closer to it. We got to play hookey today from the cancer center — we slept late, ate breakfast, and got ourselves ready for a visit with Papa (Momma’s Daddy) and Ms. Jo (Papa’s little lady).

Background story on Papa and his little lady — I met Ms. Jo while lifeguarding one summer before leaving for college. Her husband had passed away and she spent her days sitting by the pool with me soaking up some Vitamin D and watching her grandkids swim. I’d mentioned my handsome Papa to her a few times and one hot August day he just happened to stop by the pool for a visit — conveniently while she was there. They seemed to hit it off during their first encounter but Papa played hard to get for a month or so and didn’t call to ask Ms. Jo out until the Fall. He always says that he told her he’d call just not when he’d call…..always the jokester. They had their first official date and have been together ever since — 8 fun filled years or is it 9?? Ms. Jo has become a part of our family and in a way a quasi grandmother for my sister and I. She was the stand in bride during my rehearsal and was seated as a grandmother would be during the wedding. I know they both drive each other crazy sometimes but I can’t imagine the last few years any other way.
Back to today — we headed out tonight for a red meat fest at The Peddler Steakhouse here in Greenville. Papa ordered the prime rib well done, then I convinced him to change it to medium. It of course came out bloody as a stuck pig (not a big deal for me or my dad) but not so appetizing for the cowboy. He’s convinced food gets spit on when you send it back — we sent it back anyway for a little more heat. Momma and I split a ribeye which was decent, Lib had chicken, and Ms Jo had a very well done ribeye. I was definately intrigued by their massive salad bar. I’m wondering if I can convice the chefs at Morrision to start putting Vienna sausages on the salad bars in our cafes??? That was a first and no I didn’t put them on my salad.
Overall the food was good but the company was better. It’s been nearly 6 weeks since Momma has seen anyone besides her caretakers (me, Jess, Daddy, and Lib) and the folks at the cancer center so it was nice to see them. If we all disappear next week it’s because we packed up and headed to the Keys — I’m hoping my Florida fever rubbed off on the great traveler…..

Oh and about the light at the end of the tunnel — we could possibly be going home next week. :)
Fighting Like A Girl

We’re still here! Last week’s work meeting in ATL was crazy busy and left little time for updates. Beyond a week long migraine and elevated liver enzyme levels there wasn’t much to report.

Daddy stepped in and did a great job as caretaker for the week.
We went in to the cancer center this morning for labwork. No need for fluids today. Liver enzyme levels are still elevated however they’ve gotten significantly better since Friday.
We get a day off tomorrow — Papa and Ms Joe are coming up for a visit. We’ll have to be back at the cancer center on Wednesday for labwork.
I’ll leave you with the Week 6 Photo 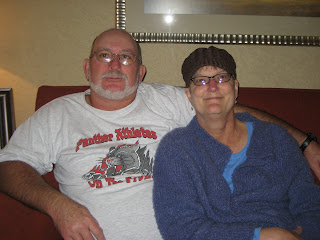 Super quick update before I head down to my meeting.

Engraftment happened Sunday! She’s no longer neutropenic and was released from lock down yesterday! No more extra fluid bag to carry around either.

I think she and daddy went out to celebrate last night — for his birthday AND for her. :)

How GREAT is our God?