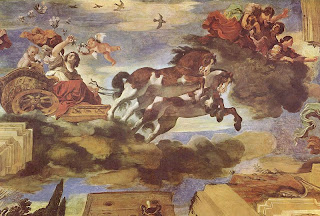 Aurora, goddess of the dawn, renews herself every morning and flies across the sky, announcing the arrival of the sun. With the aid of MLN8237 She flies through my blood each morning selecting only those cells with aberrant expression of Aurora A kinases, disrupting their assembly of the mitotic spindle apparatus, disrupting chromosome segregation, and inhibiting myeloma cell proliferation. Technical musing that add to the mystique of the novel drug I’m testing. Although feeling drugged drags up all kinds of cancer sediment this dip in the treatment pond has been rather mild.

Every morning was a cheerful invitation
to make my life of equal simplicity,
and I may say innocence, with Nature herself.
I have been as sincere a worshipper of Aurora as the Greeks.
I got up early and bathed in the pond;
that was a religious exercise,
and one of the best things which I did.