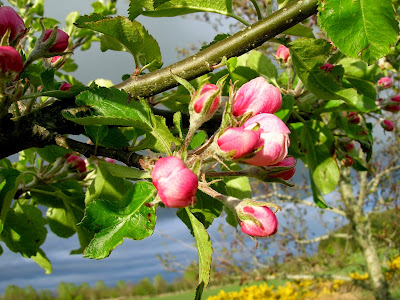 Exciting times on the farm:  the apple tree is flowering!
FL gifted me 5 fruit trees for our first wedding anniversary in 2008, and it has taken 7 years for the apple tree to have blossom.
Will we get any apples this year?
That would be amazing! 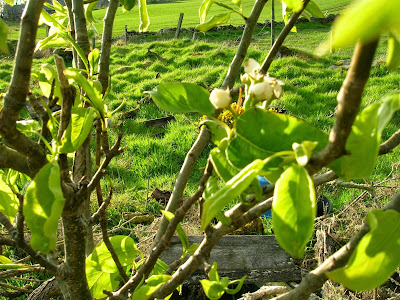 The pear tree is trying hard too, but its flowers are far less prolific.
If you peer through the leaves, you can see the remains of the beehives which haven’t seen bees since the 1970s.
What a pity!
I can’t help thinking we might need bees to pollinate the trees…? 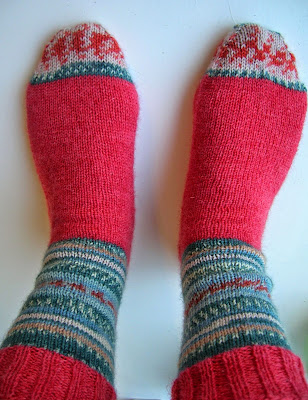 In knitting news, I finished my latest Vanilla Sprinkles socks, this time using up the remains of a ball of Arne and Carlos sock yarn from these socks, with a 50g ball of strawberry-coloured Regia 4 ply for the cuffs and feet.
I was astonished when they turned out as a matching pair because I did nothing at all to contrive it.
Serendipity!

The second sock was knit in a week, mostly because we spent a lot of time in the hospital on Tuesday.
It was FL’s regular check-up and we were full of trepidation because he had been feeling very ill.
The doctor was puzzled.  His blood tests seemed to suggest he was doing really well.
Where was the pain?  What sort of pain was it?  Any rashes?
“Definitely not” said FL.
So she asked him to remove his shirt for an examination… 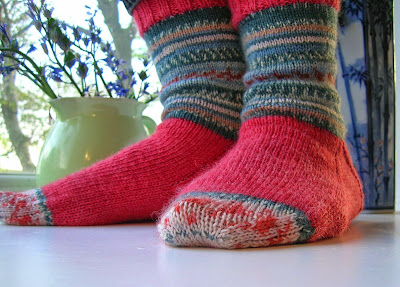 OMG!  His chest was a mess of weeping blisters!
The doctor took one look and said:  “Shingles!”
They were all round his upper chest and shoulders, just above his field of vision if he looked down at himself.  So he had no idea.
I felt like the very bad mother of a naughty toddler – how could I not have known?!
And of course we had been sitting in the waiting room for several hours, surrounded by immune-compromised chemo patients… oh the guilt!
I am so very sorry if anyone caught the virus from him that day!
We were put into a quarantine room until FL’s drugs arrived, with mammoth doses of Acyclovir for the shingles (which is like grown-up chicken pox with extra nerve pain, if you don’t know.)
He was very grumpy, not least because he wasn’t allowed to go down to the cafe while we waited.
I fetched him some tempting snacks, but he just wanted to go home and go to bed.
Fair enough.
So I knitted a sock.
A Pox Sock?

Myeloma Update
FL’s Freelite score was down to 80.
However, because of the shingles they decided not to give him dexamethasone this month, in case it made the pox worse than it already was.
They did continue his prescription for Pomalidomide, because without it they reckon his myeloma would take advantage of his current weakness and strike back.
Fun times!