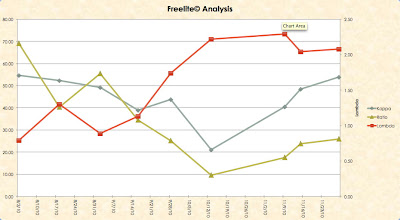 Click on Me
I had hoped to announce by now that I had achieved complete remission. No such luck. The chart above shows the results of all of the Freelite© tests I’ve taken since August. (The Freelite test gives a rough idea of the tumor burden, which, for myeloma, would be the number of malignant plasma cells in the marrow.) Clearly the chart demonstrates that my cancer (the grayish-blue line) has been stuck for months in the range of forty to fifty. If we throw out the low point, the curve is almost flat. High normal is 1.76 mg/dL, a value much lower than anything in the chart. If you click on it, the chart will become much easier to read.

Numbers this high normally tear people apart, but, as you will recall, before the transplant I saw kappa numbers in the thousands with no apparent damage. The current numbers are two orders of magnitude lower than before. What you are seeing is a war between the new immune system and the old cancer, according to one of my better doctors. If the new immune system weren’t fighting the cancer, there would be an exponential rise in kappa (the line would be trending toward the vertical). Exponential rises kill. 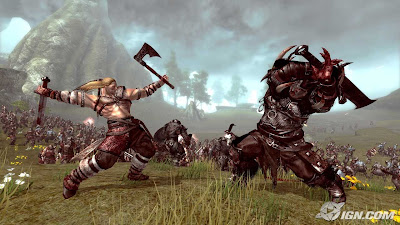 The Battle for AsgardThere is the possibility I can live quite normally despite the high numbers. Except for this week’s withdrawal from morphine, I’m already living quite normally. It takes a long time for the new immune system to become as strong as a native system, so the appropriate response now is watchful waiting. I suspect this means, in addition to Freelite testing, I will need regular CT-Pet scans. The last thing I need is to discover by a broken bone, surgery, and radiation that a response is in order.

On the other hand, if the Freelite number starts to rise rapidly, or damage is discovered, it may be time for a donor lymphocyte infusion (probably along with Thalidomide or one of its newer derivatives). In essence, I would get an injection of white blood cells from my donor, cells that are likely to recognize and attack the cancer. The downside is the high probability of serious graft-versus-host disease (which the Thalidomide is intended to mitigate). 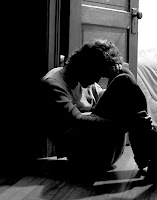 In mid-October, the last time I dared to write about what the cancer was doing, I had just seen the dip in kappa to 21.10 along with much-improved blood work. My doctors and I were extrapolating that we would be seeing “normal” by Thanksgiving. When the number unexpectedly rose in early November, at first I was as stunned as if a lover had slapped me in the face. My bewilderment soon segued into deep depression as I struggled to get my mind around the meaning of this unhappy development. Was the mini-allo a failure? Had my fabulous good luck failed me? Was I once more in the End Game?

After many days of dark processing, I decided that, no, I’m not back in the End Game. There are things that can be done if the cancer spins out of control. I’m not being damaged. The numbers aren’t soaring in the wrong direction. The only cancer-related problem I have is GVHD of the esophagus and the eyes — annoying but tolerable. My quality of life is good. I still enjoy perfectly ordinary days. However, the feeling I once had, the feeling that before too long I could completely forget I ever had cancer, is gone. I haven’t beaten the Beast, but I am holding my own in a fight that, at the moment, is not difficult.

If I hadn’t had the transplant, I would surely have died by now. The numbers were horrible and trending upward so quickly that even my cast-iron system would have failed. My life was severely impaired. When the transplant window opened, I jumped through it without a moment’s hesitation. And I’m glad I did, even though I would much rather be looking at remission right now rather than mere stability.

There’s one other plus. Regardless of what happens next, I attacked my enemy with everything I had. I went “all in,” as poker people like to say, and I’m still here. Not only is there considerable joy in that, but I’ve traveled all the way to the apocalyptic end and have returned, bloody but unbowed. The bully has been faced down. There is nothing left to fear.

In the hospital, in my delirium, Ivonne witnessed an event I don’t remember at all, an event I’ve held back until now. Apparently, a group of phantasms had come to my bedside to present me with a proposition. As I sat up to talk with them, they told me of a wondrous place, an Edenic, joyful land where I would be quite happy. They wanted to take me there. For a few moments, I tried to get up to follow them. Then, falling back into bed, I said, with a sigh, “No, I cannot come with you. This is not my time.” Then I closed my eyes and slept. 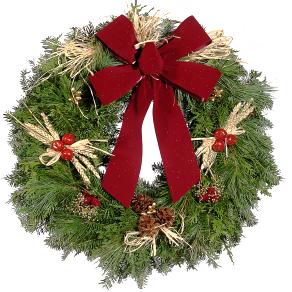